The Pittsburgh Pirates are a major league team in Pittsburgh, PA who play in the National League's Central Division.

The first major league baseball team in Pittsburgh was formed in the 1882 American Association in the city of Allegheny, PA (now Pittsburgh's North Side); in the fashion of the time the team was merely known as the Alleghenys. The team joined the National League in 1887 after arguments with the AA over the contracts of Sam Barkley and Jumbo McGinnis. The team would get a real nickname in 1891. After the collapse of the Players League, the Pittsburgh team again got into a contract dispute. The owners of the Philadelphia Athletics had expected 2B Lou Bierbauer to return to his pre-PL team; instead he wound up with the Pittsburgh club after a controversial ruling by the National Board of Control headed by Allen W. Thurman. It was said that the Steel City squad had "pirated" away Bierbauer and they were thereafter known as the Pirates (and related unofficial nicknames). 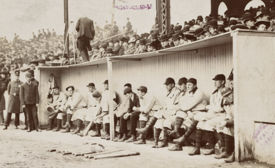 The Pirates became a National League powerhouse in 1900 when owner Barney Dreyfuss merged the team with the Louisville Colonels who were contracted after the 1899 season, sending Pittsburgh star players Honus Wagner, Fred Clarke, Deacon Phillippe, Tommy Leach, Claude Ritchey and Rube Waddell to join a team that already had Ginger Beaumont, Sam Leever and Jack Chesbro. From 1901 to 1903, the team won the NL pennant every season and posted the best record in club history in 1902. In 1903, the team participated in the first World Series, falling to the Boston Americans 5 games to 3 in a major upset, in part because it only had two front-line pitchers available, Phillippe and Leever.

The Pirates remained strong throughout the decade, winning the 1909 World Series in the year Forbes Field opened with Clarke as player-manager, but faded when Wagner and Clarke retired and Leach left town. They returned to prominence in the 1920s and 1930s behind players like the Waner brothers - Paul "Big Poison" Waner and Lloyd "Little Poison" Waner -, Pie Traynor, Max Carey, Kiki Cuyler, Arky Vaughan, George Grantham and Glenn Wright. In the 1925 World Series, they faced the Washington Senators and their star pitcher Walter Johnson, and prevailed 4 games to 3 when the Pirates finally got to Johnson in Game 7. In 1927, however, the Pirates were not so lucky when they once again appeared in the World Series against the New York Yankees and the Yanks' "Murderers' Row". With star right fielder Cuyler suspended by manager Donie Bush for the entire series, the Pirates were stymied in a 4-0 sweep.

Once this group of talent left in the late 1930s and 1940s, things again turned sour. Ralph Kiner was the sole bright spot of many of the teams in the late 1940s and early 1950s. The team had not prepared well for the farm-system era, and to fix this, they brought in Branch Rickey as General Manager.

The Rickey teams were known as the "Rickey Dinks" for the number of young kids who were playing. During his tenure, he traded fan favorite Kiner to the Chicago Cubs in 1953 over a salary dispute, launching negative attacks in the press against him in the process. While Rickey would not remain to see the fruits of his projects, the increased attention to the minors led to the development of players like Roberto Clemente (swiped from the Brooklyn Dodgers in famous scouting coup before the 1955 season), Bill Mazeroski, Vernon Law, Bob Friend, Bob Skinner, Dick Groat and Elroy Face, who would lead the team to a World Series title in 1960, highlighted by Mazeroski's dramatic walk-off home run to win Game 7 over the New York Yankees.

The Pirates, initially slow to integrate, were quickly becoming one of the most integrated teams and sent out the first all-minority starting lineup in baseball history in 1971. Players like Stargell, Clemente, Dave Parker, Al Oliver, Manny Sanguillen and Dock Ellis played pivotal roles in establishing the team as one of the greatest in the National League in the 1970s. The 1971 Pirates rebounded from their loss to the Cincinnati Reds in the 1970 National League Championship Series to not only win the NL pennant, but the World Series as well against the favorite Baltimore Orioles, 4 games to 3, in a fabulous performance by Clemente. Despite the victory, the Pirates suffered two major setbacks after the 1972 season. Steve Blass, the best pitcher in the 1971 World Series, inexplicably lost his ability to throw strikes and was soon out of the league. Superstar outfielder Clemente finished up the season with 3,000 hits, and was spending the off-season aiding Nicaraguan earthquake victims when his plane crashed into the Atlantic Ocean on December 31st, killing him. He was posthumously inducted into the National Baseball Hall of Fame soon after his death.

The tragedy did not fully stop the Pirates' momentum in the decade, and by the end of 1978, the Pirates still had a core of wily veterans in Stargell and Sanguillen and youthful stars in Parker, Kent Tekulve, and Bert Blyleven. The 1979 season was a triumph for the Bucs who fought off a young and tenacious Montreal Expos team in the season's last days and made it to the World Series, once again facing the Baltimore Orioles. Using the popular Sister Sledge hit "We Are Family" as a unifying force under their aged leader Willie "Pops" Stargell, the Pirates won the series, 4 games to 3 after having fallen behind 3 games to 1.

Again the team declined as the older players left, and cocaine played havoc with the lives of some of the younger ones, particularly Parker, Rod Scurry and Dale Berra. The 1985 Pittsburgh drug trials revealed the extent of the rot, as even the man inside the team's popular mascot, the Pirate Parrot, was indicted on trafficking charges. Manager Chuck Tanner was fired, his reputation in tatters. The farm system continued to produce, however, with Barry Bonds the main prize, and the deft hand of GM Syd Thrift brought the team lots of talent in trades; in the span of a few years, the team picked up young prospects Bobby Bonilla (originally signed by the Pirates, but unwisely left unprotected in the 1985 Rule V draft), Andy Van Slyke and Doug Drabek, and turned them into stars. Three heartbreak years in a row in the NLCS followed from 1990 to 1992, the Pirates falling just short of a return to the World Series each year.

The Pirates, pleading an inability to sign expensive players, let Bonds, Bonilla and Drabek go and began a series of losing seasons. The plight was worsened under GM Cam Bonifay, who kept signing has-beens and never-weres like Pat Meares and Derek Bell to expensive, multi-year contracts. The team repeatedly let their young prospects go for little to nothing - Chris Shelton, Chris Young, Aramis Ramirez and more left town in poor front office moves. During this period, the team foisted the financing of a new stadium on the citizens of Pittsburgh. While fans were pleased with the wonderful design of PNC Park, they remained angry with the funding mechanisms employed, and the team's claims of a new park helping attendance proved as silly and empty as such claims usually are. Replacing Bonifay with Dave Littlefield as GM did little good; Littlefield did not sign over-the-hill players but continued to ask for little in trades, requesting "major-league-ready" players instead of young prospects.

In 2008, the team tied the North American professional sports record for futility with 16 consecutive losing seasons; only the 1933-1948 Philadelphia Phillies had done as poorly. The Pirates then took hold the record for most consecutive losing seasons outright with 18 after finishing last with a 62-99 record in 2009 and extending it again with another last-place finish in 2010. Things were brighter in 2011 however, as a renewed emphasis on the farm system and on drafting and acquiring high-ceiling players began to pay dividends. Led by home-grown talent such as Neil Walker, Jose Tabata, Pedro Alvarez and Andrew McCutchen, the Pirates began to show some promise in 2010, even while posting the second-worst road record in NL history. Under new manager Clint Hurdle, they played around .500 most of the first half of 2011 and even moved briefly into first-place in late July. For once they were buyers and not sellers at the trading deadline, but the moves they made failed to work and they went on a losing streak, falling well behind the Milwaukee Brewers who made a move in the opposite direction at the same time. They did even better in 2012 but again folded in the last couple months, just missing .500.

They finally ended their run of losing seasons in 2013 with some of their younger players such as Alvarez, McCutchen and Starling Marte blossoming in addition with a couple of trade acquisitions (most notably A.J. Burnett) and free agents (Francisco Liriano and Russell Martin). They won the Wild Card Game against the Cincinnati Reds before being defeated by the St. Louis Cardinals in the Division Series. They returned to the postseason in both 2014 and 2015, but were shut out at home in the Wild Card Game both years, leading to early exits from the postseason. The loss was particularly painful in 2015, as Pittsburgh had posted the second-best record in the major leagues during the regular season, but had failed to win a division title because their division rivals the Cardinals had been the one team in baseball with a better record that year. After that excellent three-year streak, the Pirates fell back below .500 in 2016 and again in 2017, as a number of their top players, such as Neil Walker, Mark Melancon, Justin Wilson and Francisco Liriano, left or were traded and proved difficult to replace. An ill-thought trade for P Chris Archer cost GM Neal Huntington his job after the 2018 season, and he was followed one year later by Hurdle. Things hit rock-bottom in the pandemic-shortened 2020 season, when they posted the worst record in the majors under first-year manager Derek Shelton.