The New York Mets were born out of the dismay of New York City's National League baseball fans following the simultaneous departure of the Brooklyn Dodgers and New York Giants to California after the 1957 season. Originally, the promoters behind the new team were planning to have it be a part of the new Continental League, as Major League Baseball was at first refusing the idea of expansion. When it changed its mind in 1960, the planned Continental League disappeared, and potential franchise owners concentrated on obtaining one of the four new franchises to be awarded, two in the American League through the expansion of 1961, and two in the National League in the expansion of 1962. The National League granted Joan Payson and others a franchise to be placed in New York. Among the other names discussed for the club were Continentals, Skyliners, Jets, Meadowlarks, Burros, Rebels, Skyscrapers, NYBs and Avengers.

The Mets started play in the Polo Grounds and were a spectacular failure in the beginning. Despite the presence of aging stars Richie Ashburn and Gil Hodges, they went 40-120 in their first season in 1962, starting in glorious fashion by losing the first 10 games they played, and seriously damaged Casey Stengel's managerial winning percentage over the next few seasons. Indeed, Stengel came up with some of baseball's most famous quotes while managing those early teams ("Can't anyone here play this game?"). The Mets moved to Shea Stadium in 1964. 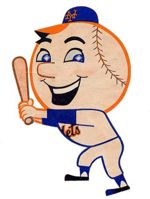 The Mets were endeared to New York City when they pulled off the "Miracle of 1969". The team had never finished higher than ninth in the previous seven seasons. However, in 1969, the Mets roared to a division title on the arms of young hurlers Tom Seaver, Jerry Koosman, and Gary Gentry and the leadership of Hodges, now the team's manager. In the postseason, they upset both the Atlanta Braves and Baltimore Orioles, en route to winning the World Series and proving that expansion franchises could and would compete with the old guard of baseball.

The miracles continued in 1973, when a team that barely finished above .500 went all the way to the 7th game of the World Series before bowing to the mighty Oakland A's; "You Gotta Believe" was the slogan started by reliever Tug McGraw that year, and he, Seaver, Jon Matlack and OF Rusty Staub were the heart of that surprising team. In 1986, the Mets won a second World Championship, partly thanks to one of the most famous plays in World Series history. Facing the Boston Red Sox in the World Series, down three games to two and 5-3 with two outs in the bottom of the 10th, the Mets used three singles, a wild pitch and, most famously, a Mookie Wilson grounder through Bill Buckner's legs, to win the game, forcing a Game 7, which the Mets would win 8-5. The team's stars were Ps Dwight Gooden and Ron Darling, C Gary Carter, 1B Keith Hernandez and OF Darryl Strawberry. That same group won another division title in 1988, but was upset by the Los Angeles Dodgers in the NLCS.

After making headlines for mediocre play and embarrassing incidents for most of the 1990s, the Mets returned to post-season play in 1999 and 2000 at a time when catcher Mike Piazza was their biggest star. The Mets made an unlikely run to the World Series in 2000, falling to the cross-town New York Yankees in 5 games. After a few more seasons of mediocrity, the Mets made a splash by signing free agents Pedro Martinez and Carlos Beltran before the 2005 season, triggering another rise. It culminated in 2006, when they were eliminated by the St. Louis Cardinals in the late innings of the 7th game of the NLCS, but in 2007, the team suffered a humiliating late-season collapse to lose the division title to the Philadelphia Phillies on the season's last day after leading the race most of the year. They collapsed again in 2008 after keeping pace with the Phillies until late September, being beaten out of the Wild Card spot by the Milwaukee Brewers. Great things were expected in 2009, when both New York teams moved into new ballparks, with the Mets inaugurating Citi Field, a veritable jewel compared to the charmless Shea Stadium. However, the team was beset by a long string of injuries and fell well out of the running, then fell back to the bottom half of the standings in the first two seasons of the 2010s.

Things began to turn around a couple of years later, when the Mets began to come up with a string of excellent young pitchers, starting with Matt Harvey, Zack Wheeler and Jacob deGrom. Both Harvey and Wheeler lost a full season to an arm injury, but after finishing in second place - albeit with a losing record - in 2014, the Mets won a division title in 2015. Riding a quartet of young starters featuring Harvey, deGrom and rookies Noah Syndergaard and Steven Matz, they made it to the World Series that year, but fell to the Kansas City Royals in five games.

There are a couple of quirky facts about the Mets. First, no pitcher for the team had ever pitched a no-hitter until Johan Santana in 2012. Tom Seaver came closest when he came within one out of a perfect game against the Chicago Cubs in 1969. This is particularly strange given the Mets have been known for their pitching over the years. Second, the Mets have not really had any position players having long and distinguished careers with the team; as a result, the relatively mediocre Ed Kranepool still holds the team record for games played. It looked for a time as if David Wright would pass him - he did erase his club record for hits - but injuries got the best of him. Finally, into the mid-1980s, the Mets were known for their revolving door of third basemen; it seems that no player could hold the job for more than a couple of seasons, and in most years, the position featured an array of nonentities flailing at the hot corner. That changed in the late 1980s when Howard Johnson put together a string of excellent seasons, and the supposed curse, long a favorite of sportswriters, is all but forgotten today. To date the team has had 23 managers, counting Beltran who was named manager but was fired before spring training started in 2020, and very few of these men have lasted more than a couple of seasons at the helm (with Davey Johnson, Bobby Valentine and Terry Collins the most notable exceptions).

The Mets have become Major League Baseball's most successful team in Opening Day games. From 1970 to 2009, they compiled a record of 31 wins and 9 losses in season openers, the best among all teams in MLB during this 40-year period. In 2010, they defeated the Florida Marlins, 7-1, at Citi Field on April 5 for another season-opening victory.