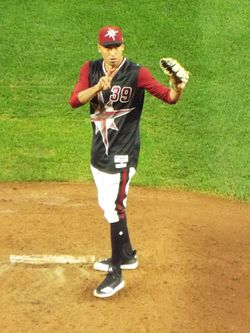 Pitcher Edwin Diaz was selected by the Seattle Mariners in the 3rd round of the 2012 amateur draft out of Caguas Military Academy in Puerto Rico. He began his pro career that season with the AZL Mariners. In 2013, he went 5-2, 1.,43 in 13 starts for the Pulaski Mariners of the Appalachian League, and followed that by going 6-8, 3.34 in 24 starts for the Clinton LumberKings of the Midwest League in 2014. 2015 saw him open the year in the California League, with the Bakersfield Blaze, where he was 2-0, 1.70 in 7 starts. He moved up to the Jackson Generals of the Southern League, where he was 5-10, 4.57, to finish with a combined mark of 7-10, 3.82. Even though he did not pitch as well in the Southern League as he had at lower levels, he was named to be part of the World Team in the 2015 Futures Game and pitched in an inning during the contest.

Diaz started the 2016 season back at Jackson as the organization's number 2 prospect. He was 3-3, 2.21 in 16 games, moving to the bullpen after 6 starts, when he got the call to the Show in early June. He made his debut with the Mariners on June 6th, pitching a scoreless inning in relief against the Cleveland Indians. He impressed by reaching 101 mph on the radar gun with his fastball during that outing. He recorded his first career save on August 2nd, preserving a 5-4 win over the Boston Red Sox. The Mariners had decided to anoint him as their new closer, following a number of poor performances by Steve Cishek. He took to the role like a fish to water, as by August 8th, he had already picked up 5 saves and was one of the reasons the M's were hanging on at the fringe of the wild card race. He went 0-4 but picked up 18 saves that first season, with a 2.79 ERA and a whopping 88 strikeouts in 51 2/3 innings over 49 games. He returned as the closer in 2017 and added another 34 saves, while going 4-6, 3.27 in 66 games. He wasn't quite as dominant as in his rookie season, with 89 Ks in 66 innings, and manager Scott Servais took him out of the closer role for brief spells when he hit rougher waters. Still, it was quite a successful season.

In 2018, he had a great start to his season and quickly became the American League leader in saves. He was named to the All-Star team, but ironically failed to close out the AL's win as he gave up a two-run homer to pinch-hitter Scooter Gennett in the bottom of the 9th. In regular season games, he was almost untouchable though. On August 9-12, he saved all four games of the Mariners' sweep of the first-place Houston Astros, becoming the first pitcher to do that since 2004, when Joe Nathan had recorded the feat for the Minnesota Twins. With 46 saves at that point, he was on a pace to break the single-season for record for saves of 62, set by Francisco Rodriguez in 2008. His 49th save on August 24th gave him the team record, eclipsing the 48 saves recorded by Fernando Rodney in 2014, and he reached the 50-save plateau the following day. He finished the year with 57 saves, leading the majors by a large margin, to go along with 124 strikeouts and just 17 walks in 73 1/3 innings, while his ERA was an excellent 1.96. He was rewarded with the Mariano Rivera Award as the best relief pitcher in the AL.

After the 2018 season, however, the Mariners began trading some of their higher profile players and his name was mentioned in trade rumors as a result, not that he was particularly costly at this point of his career, but as a possible sweetener to move the high-priced Robinson Cano. On December 1st, rumors emerged that a deal had been completed with the New York Mets to send the pair there, along with a pile of cash, in return for OF Jay Bruce, P Anthony Swarzak and three prospects, Gerson Bautista, Justin Dunn and Jarred Kelenic. He was unable to agree with the Mets on a contract extension and on March 4, 2019, they gave him just a token raise, to $607,000, making him an absolute bargain but also souring his relationship with the front office in anticipation of his becoming eligible for salary arbitration after the season. He showed his displeasure by refusing to sign the contract, a symbolic measure as the Mets still had the right to impose a contract unilaterally, but a clear sign that he was not satisfied with the outcome. But it turned out to be a very ugly season for Diaz, who was mostly notorious for blowing saves and coughing up homers, and not dominating opposing line-ups with the game on the line as he had done the previous season. On September 26th, he set an unenviable record when he gave up his 15th 9th-inning of the year, to Austin Dean of the Miami Marlins, breaking a mark previously set by Francisco Rodriguez in 2014. By then, he had long lost the closer's job.

On April 29, 2022, he pitched the 9th inning, striking out the side, in completing a combined no-hitter for the Mets against the Philadelphia Phillies. Tylor Megill, Drew Smith, Joely Rodríguez and Seth Lugo had taken care of the first nine inning, and he finished the job by striking out Bryce Harper, followed by Nick Castellanos and J.T. Realmuto. He picked up his 4th save of the year in the 3-0 win. On May 17th, he picked up his 9th save of the season in the first game of a double header against the St. Louis Cardinals and later that day, his brother Alexis Díaz, pitching for the Cincinnati Reds, picked up his first career save against the Cleveland Guardians. They were only the third pair of brother to pick up a save on the same day, following Josias Manzanillo and Ravelo Manzanillo in 1994 and Tim Worrell and Todd Worrell in 1997.