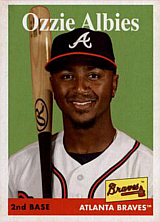 Infielder Ozzie Albies is an All-Star and Silver Slugger winner, currently starring with the Atlanta Braves.

Albies was signed by the Braves as an amateur free agent out of Curaçao before the 2014 season. He started his pro career with a bang, hitting an impressive .364/.446/.444 in 57 games between the GCL Braves and Danville Braves his first year. In 2015, he played for the Rome Braves of the South Atlantic League, where he hit .310/.368/.404 in 98 games, scoring 64 runs and stealing 29 bases. In spite of his young age, he was picked to play for the World team in the 2015 Futures Game that year. In 2016, Ozzie moved all the way to Triple A after starting the season hitting a scorching .321 in 82 games with the Mississippi Braves of the Double A Southern League. He was promoted to Gwinnett of the International League on April 30th and shuttled between the two levels for the first time. He struggled a bit, hitting just .248 for Gwinnett. He also had to learn a new position, moving to second base as a result of the Braves acquiring Dansby Swanson in a trade before the season, and the young former overall #1 pick in the 2015 amateur draft was being put on a fast track to claim the regular shortstop job in Atlanta, which he would do before the end of the season. Still, it was far from bad for Albies, as he hit .292/.358/.420 in 138 games, with 83 runs scored, 33 doubles, 10 triples and 3 homers, all while playing regularly in Triple A before turning 20.

In 2017, he returned to Gwinnett to start the year, but it was obvious that he would be in the majors before the season was over unless disaster struck. He was called up to make his debut on August 1st, starting at second base against the Los Angeles Dodgers, hitting .285 with 9 homers and 41 RBI in 97 games at the time of his call-up. He went 0 for 2 with a walk and a run scored. His first major league hit came on August 3rd; a homer off Tony Cingrani of the Dodgers, making him the first player born in 1997 to hit a big league homer. He played regularly the rest of the way at second base, hitting .286 in 57 games with 6 homers and 28 RBI. Following his solid first taste, Albies started the 2018 season as the Braves' starter at second. He was soon joined by two other youngsters, Ronald Acuna and Mike Soroka, giving the team the three youngest players in the National League by early May. He continued to hit for a good average, but now found unexpected power as well. On May 10th, he hit his 11th homer of the season, his first career grand slam against the Miami Marlins, to place him second place in the NL in homers, along with a league-leading 13 doubles. Another homer on May 11th tied him with Bryce Harper for the home run lead as well, not bad for someone standing only 5'9"! On June 25th, he hit the first walk-off homer of his career, an 11th-inning blast off Dylan Floro of the Cincinnati Reds that gave Atlanta a 5-4 win. His great first half landed him a spot at the 2018 All-Star Game. He slowed down during the second half and finished at .261 in 158 games, with 40 doubles, 24 homers, 105 runs and 72 RBI. The Braves won a division title and in the postseason, he went 3 for 15 in heir loss to the Los Angeles Dodgers in the Division Series.

On April 11, 2019, he reached a deal with the Braves for a $35 million contract extension with two club option years that could extend until 2027. It followed on the heels of a similar contract with fellow young star Acuna. While a return engagement at the All-Star Game was not in the cards, Albies turned in a better season than one year prior. He crafted a .295/.352/.500 slash line in 160 games, pacing the senior circuit in hits (189) with 75 going for extra bases (43 doubles, 24 homers and 8 triples). At season's end, he joined Acuna and Freddie Freeman as a National League Silver Slugger.

On June 30, 2021, he had a tremendous game at the plate for the Braves as he collected 5 hits including a pair of homers and 7 RBIs in a 20-2 demolition of the New York Mets. When he hit his 25th homer against the Colorado Rockies on September 4th, he became the firth member of the Braves' infield to reach the mark, making the Braves the second team in history to accomplish the feat, after the 2008 Florida Marlins. He finished the year at .259 in 156 games, with 103 runs, 40 doubles, 7 triples, 30 homers and 106 RBIs. He was successful on 20 of 24 stolen base attempts and his OPS+ was 106. He was an All-Star and Silver Slugger Award winner for the second time each, and finished 13th in the voting for the MVP Award. In the postseason, he contributed to the Braves' first conquest of a World Series title since 1995 by starting all 16 games at second base and going 16 for 63 (.254) with 12 runs scored. He scored 7 runs in the NLCS win over the Los Angeles Dodgers.

He was having a slow start to his season in 2022, batting just .244 with an OPS+ of 89 after 62 games when he fractured his foot on June 13th when he tripped while attempting to leave the batter,s box after an awkward swing resulted in a grounder to short in a game against the Washington Nationals. The injury was expected to cost him a good chunk of the remainder of the season, and came at a really bad time for the team, which had won 12 consecutive games after a poor start that many characterized as a "World Series hangover". In the immediate, his spot in the line-up was taken by back-up Orlando Arcia.