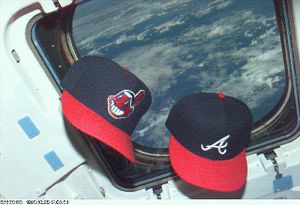 Caps from the Indians and Braves in orbit on the Space Shuttle during the Series.

The 1995 World Series featured a clash of the majors' best pitching in the Atlanta Braves and the best offense in the Cleveland Indians.

Following a 90-54 regular season, the Braves reached the World Series for the third time in four years by defeating the Colorado Rockies in the NLDS in four games and sweeping the Cincinnati Reds in the NLCS. Managed by Bobby Cox, the Braves featured one of the most dominant starting rotations in major league history, led by the season's eventual Cy Young Award winner, Greg Maddux (19-2, 1.63 ERA), and including stalwarts Tom Glavine and John Smoltz. The Braves hit only .250 as a team, but the power bats of first baseman Fred McGriff and right fielder David Justice helped provide more than enough support for the Braves' superior pitching staff.

The Indians were the major league's dominant team during the regular season, posting a 100-44 record. In contrast to the Braves' excellent pitching, the Indians boasted an overwhelming offense. Albert Belle was the lineup's linchpin, becoming the only player in major league history to post 50 homers and 50 doubles in the same season. Young sluggers Jim Thome and Manny Ramirez, as well as speedy leadoff man Kenny Lofton, were among the other stars in the Indians' stacked batting order. Veteran hurlers Orel Hershiser and Dennis Martinez fronted a solid, if unspectacular, pitching staff. The Indians advanced to their first World Series since World Series by sweeping the AL East champions, the Boston Red Sox in the ALDS and then outlasting the upstart Seattle Mariners in a six-game ALCS. The Indians were managed by Mike Hargrove.

Fred McGriff tied the score in the 2nd with a home run off Hershiser. There were no more hits until Jim Thome singled in the 5th inning. He did not score. Mark Lemke singled with two out in the 6th and he did not score either.

In the 9th inning, with Maddux still pitching, Paul Sorrento led off by grounding out to Lemke. Lofton then singled, only the second hit by the Indians all day. Omar Vizquel then grounded to Lemke, who threw to McGriff to retire Vizquel. But Lofton raced for third and then scored on a throwing error by McGriff to make it a one-run game. Carlos Baerga ended the game by popping up to Chipper Jones.

Game 2 saw Tom Glavine go up against Dennis Martinez. The Indians struck first in the 2nd inning. Albert Belle led off with a single and Eddie Murray chased him home by belting a homer. The next three made out.

In the bottom of the 3rd, Marquis Grissom was hit by a pitch to start the inning. Mark Lemke singled and then Martinez had the Braves' center fielder picked off but threw the ball away, allowing Grissom to get to third. Chipper Jones then lined a shot to left that was caught by Belle, but Grissom scored, giving the Braves their first run. Fred McGriff then grounded back to Martinez, but Lemke was not forced out at second, although McGriff was retired. Dave Justice then singled to score Lemke and tie the game.

Before Game 6, Dave Justice set off a firestorm of controversy when he criticized the Atlanta fans' support of the team. "They'll probably burn our houses down if we don't win," he said. "They're not behind us like the Cleveland fans, who were standing and cheering even when they were three runs down." (From The World Champion Braves: An Illustrated History of America's Team 1871-1995)

The Cleveland 1st inning was unsuccessful, they were retired in order. The Braves' half saw two singles, but Mark Lemke was erased when he was caught stealing and the Braves didn't score that inning. Naturally, when Justice came up in the 2nd inning he was booed. He drew a walk. Ryan Klesko followed with another walk. But then Javy Lopez popped up and Rafael Belliard hit into a double play.

Both teams went 1-2-3 in the 3rd inning. The Indians were also set down in order in their half of the 4th. In the home half, Justice doubled with two outs. Klesko was walked intentionally, but Lopez also drew a walk, loading the bases. But Belliard flew out to center, ending the threat and the inning.

In the Indians 5th, Albert Belle walked, but was erased on a fielder's choice with Manny Ramirez replacing him at first with two outs. Jim Thome struck out to end the inning. The Braves had Lemke on first with two out when Chipper Jones singled to second base. Dennis Martinez was then pulled by Mike Hargrove for lefty Jim Poole. He got McGriff out on strikes to end the inning and the Braves threat.

Tony Pena led off the next inning by hitting a blooper to center that fell between Marquis Grissom and Lemke. That was the Indians' first hit of the day. It didn't amount to anything, as Poole was out on a bunt attempt, Kenny Lofton reached on a fielder's choice in which Pena was thrown out at second, and Omar Vizquel popped up.

Justice led off the 6th inning to more boos from the crowd, but the boos quickly turned to cheers as Justice launched a solo home run to give the Braves a 1-0 lead. No more runs followed in the inning, but what mattered to the Braves is that they had the lead.

Mike Devereaux replaced Klesko in left for the 7th. Eddie Murray walked with two out, but didn't get past second base. The Braves mounted another threat when Grissom singled against Ken Hill, and Hargrove reacted by bringing in Alan Embree. Lemke sacrified Grissom to second and Jones was walked intentionally. McGriff flied to left, but as Justice batted, Grissom stole third. Justice drew a walk to load the bases once more, but Alan Embree was able to get Devereaux to pop up to Baerga at second.

The Indians were set down in order again in the 8th. Thome and Pena went out on fly balls and Ruben Amaro was out on a grounder to McGriff, who threw to Glavine covering first base. Julian Tavarez started the 8th for the Indians, got Lopez and Belliard on outs to Belle in left, and Paul Assenmacher was called to pitch when Luis Polonia pinch-hit for Glavine. Polonia struck out.

Mark Wohlers came into the game for his fourth Series appearance and his third save opportunity. Lofton popped up a ball going into the left field stands that Belliard chased down and caught. Paul Sorrento then flied out to Grissom in center for the second out. Baerga then finished the game by flying out to Grissom in center, clinching the Braves' first World Series victory since 1957 and their first since moving to Atlanta. This was also the first professional sports championship of any kind in Atlanta's history.

The Series MVP was Tom Glavine of the Atlanta Braves.