In the 1925 World Series, the Pittsburgh Pirates beat the Washington Senators in seven games. 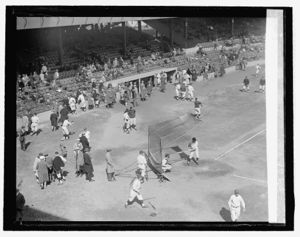 Batting practice before a game (date not given, 1925).

In a reversal of fortunes on all counts from the 1924 World Series, Washington's Walter Johnson dominated in Games 1 and 4 and lost in Game 7. The Senators built up a 3-1 Series lead. After Pittsburgh won the next two games, Johnson again took the mound for Game 7, and carried a 6-4 lead into the bottom of the seventh inning. But errors by shortstop Roger Peckinpaugh in both the seventh and eighth inning led to four unearned runs, and the Pirates become the first team in a best-of-seven Series to overcome a 3-1 Series deficit to win the championship.

During the eighth inning of Game 3, the Nats' Sam Rice ran after an Earl Smith line drive hit into right center field. Rice made a diving "catch" into the temporary stands, but did not emerge with the ball for approximately fifteen seconds. The Pirates contested the play, saying a fan probably stuffed the ball into Rice's glove. The call stood and Rice parried questions about the incident for the rest of his life—-never saying if he did or did not really make the catch. His typical answer (including to Commissioner Landis, who said it was a good answer) was always "The umpire said I caught it." He left a sealed letter at the Hall of Fame to be opened after his death. In it, he had written: "At no time did I lose possession of the ball." That was insufficient to some, but the Senators had lost the Series, so his play did not affect the final outcome.

The Senators' regular shortstop and the 1925 American League Most Valuable Player, Roger Peckinpaugh, had a tough Series, committing a record eight (8) errors in the seven (7) game series.

This page is in need of some additional content. Please help the Bullpen by expanding it, or learn how to contribute.
Retrieved from "https://bpv.baseball-reference.com/bpv/index.php?title=1925_World_Series&oldid=1077562"
Categories:
Hidden category: