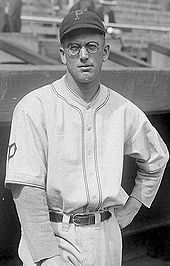 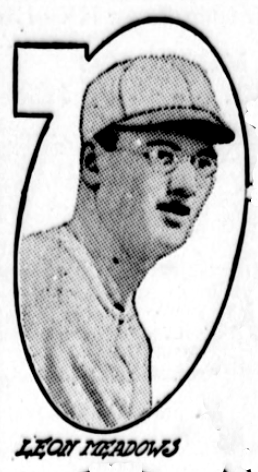 Lee Meadows is famous as the first player in the modern era to wear glasses. He wore them in his first major league game, took some criticism for wearing them, and was often called "Specs" as a nickname. He won over 180 games in his big league career, which was particularly impressive given that he played for some lousy teams during most of his career. Late in that career, he was a key pitcher on the Pittsburgh Pirates team that won the World Series in 1925.

As a young player, he pitched for semipro teams and was in the low minors till he signed with the St. Louis Cardinals in 1915. Rogers Hornsby was also a young rookie on that team. During the first part of his career, Lee had a fastball, curve and spitball, although as he aged he ended up relying mostly on his curve. His motion reminded people of Pete Alexander [1].

He had a variety of injuries and illnesses during his career, and as his speed slowed down, he was accused of having an injured arm. After his major league days he pitched in the minors again, and also did some minor league managing (with the 1939 DeLand Red Hats). He later worked for the IRS.