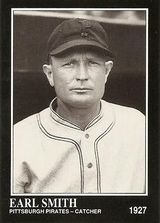 Smith started his pro career in 1916 with the Dallas Giants of the Texas League and followed that up with the Waxahachie Athletics, Fort Smith Twins and the Rochester Hustlers before service in World War I.

Smith signed with the New York Giants in 1919 and played well but on June 7, 1923 along with Jesse Barnes was traded to the Boston Braves for Hank Gowdy and Mule Watson. He was with the Braves only a year as the Pirates bought his contract the following July. In Pittsburgh, he enjoyed his best season as a pro in 1926, when he batted .346.

Released by the Pirates on July 9, 1928 he was signed the next day by the St. Louis Cardinals, with whom he made his last World Series appearances. He stayed with the Cardinals until 1930, after which he played five years in the minors before switching over to managing in 1935. Smith's last stop as a manager was with the Milford Giants of the Eastern Shore League in 1939.