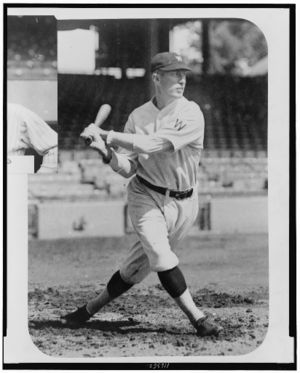 Sam Rice played 20 years in the major leagues and had 2,987 hits. His lifetime batting average of .322 put him #45 on the all-time list as of 2015. Rice played almost his entire career as an outfielder for the Washington Senators and was in three World Series with them. He stole 351 bases in his career with a high of 63 in 1920. He also pitched 39 1/3 innings with a decent ERA, as he was originally signed by the club as a pitcher. He never batted less than .293 in any of his 20 major league seasons. He played for the Cleveland Indians in his final season of 1934, with former Washington teammate Walter Johnson as manager, but declined to return for one more season at age 45 in 1935, thus falling a mere 13 hits shorts of the magic number of 3,000. He was never someone who cared much about his personal stats, and his failure to reach 3,000 hits probably delayed his election to the Hall of Fame by a couple of decades.

Rice was known for a spectacular and disputed catch in Game 3 of the 1925 World Series, which eventually won by the Pittsburgh Pirates, when he fell jumped to catch a long fly ball by Earl Smith, fell into the stands and disappeared from view, then reemerged with the ball in his glove. The umpires called Smith out, to much controversy, and for years Rice would only state that "the umpire said I caught it" when asked if he had made the catch. It was one of the most famous plays in World Series history, and his silence helped to fuel the mystique around it. He signed an affidavit (opened after his death) that he successfully made the catch.

He was a late starter in baseball, as he was already 25 when he reached the majors. He had already led an eventful life, as he had married, had two daughters, and then lost his entire family when a devastating tornado swept through his hometown of Morocco, IN in April of 1912 (he was away trying to win a job with a team in Galesburg, IL at the time). Bereft of relatives, he drifted around the country for a couple of years, joined the Navy, then was discharged in 1915 to play for the Petersburg Goobers of the Virginia League, where he both pitched and played the outfield. The team's owner had a $600 debt to Senators owner Clark Griffith, and unable to repay it, gave him his best player as compensation. When he arrived in Washington, Griffith could not remember his first name - Edgar - and told reporters he had obtained "Samuel Rice". The name "Sam" then stuck for the rest of his life. Thus he ended up in a Senators uniform at the end of that season, and by the start of 1916 was a regular outfielder for the team. He had another stint in the military during World War I, being drafted in 1918 and serving in France with the rank of sergeant, while playing a few games during furloughs before heading overseas that year.

In another odd fact, he never hit a homer over the fence in his home ballpark of Griffith Stadium during his long tenure with the Senators. All 15 of his homers were of the inside-the-park variety. The park had a very vast outfield, and his game was to hit singles, turning them into doubles or triples when they found the gaps between outfielders. He led the American League in singles four times, and his 182 singles in 1925 were the AL record until broken by Willie Wilson in 1980. He also had a team-record 31-game hitting streak at the height of the pennant race late in the 1924 season. In 1930, Rice had 207 hits as a 40-year-old. He is still the only man in baseball history to have 200 hits at age 40 or older. In addition to his hitting, he was an excellent defensive outfielder with excellent speed and a very strong arm. He usually played right field. 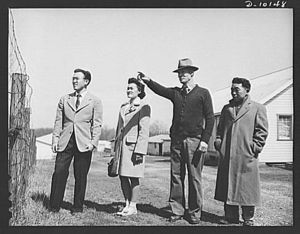 He married for the second time in 1920 and settled near Washington. After baseball, Rice returned to the simple life; he was the owner of a chicken farm near Olney, Maryland. During World War II, he employed Japanese-Americans who were relocated from their homes on the West Coast due to the unfortunate government policies at the time. After his second wife passed away, he married for the third time in 1959 and had two stepdaughters. He was such a private man that his third wife only learned about his first mariage that ended in tragedy when a reporter asked him about it in her presence. He later sold his farmland for housing development; a neighborhood called "Sam Rice Manor" now sits in its location.

Nine of the ten most similar players to Rice as of 2006 were in the Hall of Fame. The most similar is Rod Carew, but since Rice played in a lively ball era while Carew played in the second dead-ball era, the comparison is not so good. In any case, no player is truly similar to Rice, since even Carew scores at just 873. He was inducted into the Indiana Baseball Hall of Fame in 1979.

Even though the name Rice is a common one, there were no major leaguers by that name until Sam came to the majors. After him there have been several, including Jim Rice, Harry Rice, Del Rice, Hal Rice and others.

"Why worry about the first pitch? If it's no good you're ahead of him. If he gets over a good pitch, you can be sure he'll come back with it and you're laying for it." - Sam Rice