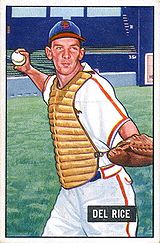 Rice got his first chance with the major league St. Louis Cardinals in 1945 and here he would stay until the middle of the 1955 season. Del was a light-hitting but excellent defensive receiver and handler of pitchers. During his long run with the St. Louis Cardinals, Del saw his most active season in 1952, appearing in 147 games with a .259 average with 11 home runs and 65 RBIs.

Del was traded to the Milwaukee Braves for Pete Whisenant on June 3, 1955 and was Del Crandall's backup for the rest of the decade, but was starter Bob Buhl's "personal" catcher during these years. Rice ended his playing career in 1961 with the Los Angeles Angels with a 17-year major league career .237 average along with 79 homers in 1,309 games, and an impressive caught-stealing ratio of 43 percent.

Rice earned a pair of World Series championship rings with the Cardinals in 1946 and the Braves in 1957. In the 1946 World Series, he was the starting catcher in Games 2 and 6 with Harry Brecheen on the mound, and contributed at the plate with a single and double and scored two runs in a 3-0 win in Game 2 over the Boston Red Sox. In Game 6, he singled to start a three-run 3rd inning in a 4-1 victory. He was also behind the plate in both of Bob Buhl's starts in Games 3 and 6 in the 1957 World Series victory over the New York Yankees.

Rice coached for the Cardinals in 1959 and the Cleveland Indians in 1967.

During most of the 1960s and early 1970s, Rice was a coach and minor league manager in the California Angels organization (spending 1962-1966 as a major league coach) and was at the helm of the 1971 Pacific Coast League pennant-winning Salt Lake City Angels.