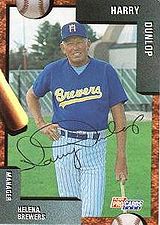 Harry Dunlop was a catcher for 14 years in the minors (1952-1968), losing two years to military service and another (1967) to inactivity. Dunlop was signed at age 18 as an amateur free agent by the Pittsburgh Pirates before the 1952 season and played for the Bristol Twins in the Appalachian League and the Burlington-Graham Pirates in the Carolina League (1952). In 1952, Dunlop caught only 15 games for Bristol - three of which are among the most famous in minor league baseball history, being the gems by Ron Necciai and Bill Bell.

His coaching career had spanned 17 years.