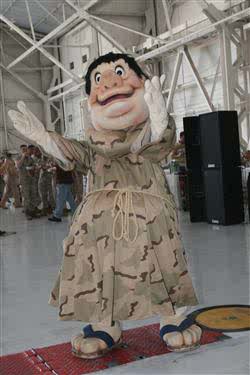 The San Diego Padres were one of four expansion franchises which first played in 1969, along with the Kansas City Royals, the Montreal Expos, and the Seattle Pilots (see expansion of 1969). They took their name from the team that played in the Pacific Coast League from 1936 through 1968, also called the San Diego Padres. The Padres' first pick in the expansion draft was outfielder Ollie Brown. The team's first owner was banker C. Arnholt Smith, who had previously owned the PCL team; however, he quickly became embroiled in charges of embezzlement linked to the running of his other businesses, and illegal campaign contributions, allegations that almost ended the franchise's tenure in San Diego before the team had played five seasons.

Playing in the National League, the inaugural Padres team won their first game on April 8, 1969 against the Houston Astros. But the Padres posted an awful 52-110 record, and the team finished last in the National League West division in each of its first six years. These early teams are most famous for two events, one positive and one negative. On August 1, 1972, 1B Nate Colbert hit five home runs in a doubleheader, matching a feat only done by Stan Musial. Less fondly remembered is that on July 20, 1970, manager Preston Gomez removed pitcher Clay Kirby for a pinch-hitter in the 8th inning while Kirby was pitching a no-hitter; the Padres lost both the game and the no-hitter. Hitting was always a problem in those early years, with SS Enzo Hernandez a particular symbol of ineptitude at the plate. In 1974, the Padres appeared headed for Washington, DC; the team seemed so sure to be moving that Topps produced cards with the Padres players in a Washington "Nat'l League" frame. McDonald's restaurant founder Ray Kroc stepped in to buy the club and keep them in San Diego. Despite being a sub-.500 team for most of the decade, the Padres had two Cy Young Award winners in the 1970s. Randy Jones won the award in 1976, and Gaylord Perry duplicated the feat in 1978. Two eventual Hall of Famers, slugging outfielder Dave Winfield and acrobatic shortstop Ozzie Smith, got their start with the club in the 1970s. The Padres tried to turn things around by signing a number of highly-sought free agents, including Rollie Fingers, Gene Tenace and Oscar Gamble. They also were very active on the trading front, earning general manager Jack McKeon the nickname "Trader Jack". In particular, he made two large trades in consecutive winter meetings with the St. Louis Cardinals that cost the team Fingers and Ozzie Smith, but landed SS Garry Templeton and C Terry Kennedy, two mainstays of the club during the 1980s. In 1978, the team finally finished over .500 under manager Roger Craig, but it was a one-year blip.

The Padres became front-runners in 1984, led by veteran free agents Steve Garvey, Graig Nettles and Goose Gossage, and home-grown batting champion Tony Gwynn. It was the year owner Ray Kroc died; that year, manager Dick Williams led the Padres to their first division title. They came back from two games down in the NLCS to deny the Chicago Cubs a trip to the Fall Classic, but were ultimately defeated in five games by the Detroit Tigers in the World Series. They stayed competitive for a few seasons, but by 1987, under fiery manager Larry Bowa, they were in full rebuilding mode. The Padres seemed geared for another stretch of competitiveness in the early 1990s. The farm system had been very fruitful, producing C Benito Santiago and P Andy Benes, and youngsters Roberto Alomar, Sandy Alomar and Carlos Baerga, who were used in trades to land 1B Fred McGriff, 3B Gary Sheffield, SS Tony Fernandez, OF Joe Carter (who was in turn traded) and P Randy Myers, alongside free agent P Bruce Hurst. It all came to naught, however, when management decided the cost of competing was too high and launched a fire sale midway through the 1993 season.

The Padres won four more division titles, in 1996, 1998, 2005, and 2006 and another pennant in 1998, when they upset the favored Atlanta Braves in the NLCS thanks to great pitching performances by Kevin Brown and Sterling Hitchcock. All of these teams were managed by Bruce Bochy and featured all-time great closer Trevor Hoffman. The 1996 team was led by 3B Ken Caminiti, the NL MVP that season. As in 1984, the Padres were matched against a great single-season team in the 1998 World Series: the 114-win New York Yankees. The Padres were swept in four games. 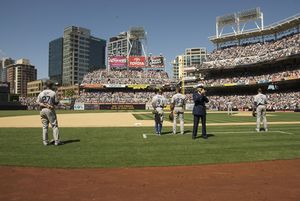 National Anthem sung before a game in 2009

In 2005, the Padres struggled to play .500 baseball for a large part of the season. However, they managed to win a division title by going 82-80, the worst full-season record by a playoff team in baseball history (the 1981 Kansas City Royals were below .500 but made the playoffs due to that year's split season schedule). The Padres were, however, swept by the St. Louis Cardinals in the National League Division Series. After another division title - and another early exit from the postseason - in 2006, the team was in control of the wild card race for most of 2007, before being caught on the season's final day by the Colorado Rockies. They then lost an epic one-game playoff in spite of starting their ace, Cy Young Award winner Jake Peavy, when the Rockies mounted an extra-inning comeback against Trevor Hoffman to cap a tremendous late-season winning streak; it was the second time in four days that Hoffman had blown a chance to guarantee the Pads a spot in the postseason. The team then began rebuilding to close out the 2000s, as stars Hoffman, Peavy, SS Khalil Greene and OF Mike Cameron all left, and OF Brian Giles showed the signs of age. Heading into the 2010s, the Padres were counting on 1B Adrian Gonzalez, closer Heath Bell and OF Tony Gwynn, Jr to become competitive once again.

Relying on an outstanding bullpen and the slugging of Adrian Gonzalez, the Padres led the NL West race for most of the season in 2010, but were caught by the San Francisco Giants in mid-September, and eventually lost out to them on the season's final week-end; the Giants would go on to become world champions. After the season, the Padres traded Gonzalez before he became prohibitively expensive, and the younger Gwynn left as a free agent. The team finished last in the NL West in 2011, and the moves continued, with set-up man Mike Adams being traded in mid-season, Bell leaving as a free agent at the end of the campaign, and then top pitcher Mat Latos being sent away for prospects, heralding a new phase of reconstruction. On August 16, 2012, the team was sold to a group headed by businessman Ron Fowler and also including former Dodgers owner Peter O'Malley and pro golfer Phil Mickelson. After a 2014 season in which the offense was particularly anemic, the new ownership group thought they could leapfrog the team into competitiveness in 2015, by making a series of aggressive trades and signings that landed them Ps James Shields and Craig Kimbrel and OFs Matt Kemp and Justin Upton, among others. However, that team failed to come together and long-time manager Bud Black paid the price, being fired in mid-year. AAA manager Pat Murphy failed to right the ship and was also let go at the end of the season, as the team went back to square one, with rebuilding once again the order of the day. The rest of the decade featured non-competitive teams trying to sort out whether any of the young players that got a chance to play were worth keeping for the long term. Their most visible names in those lean years were Wil Myers, acquired via trade, and Eric Hosmer, a free agent, but unfortunately both players' best position was first base. Young manager Andy Green was given the task to mold that team, starting in 2016, but without much success. There was finally a bit of hope in 2019, with the emergence of another group of promising young players, led by SS Fernando Tatis Jr. and Ps Chris Paddack, Cal Quantrill and Kirby Yates, complemented by veteran free agents 1B Hosmer and 3B Manny Machado. But that team still finished last, and Andy Green gave way to Jayce Tingler in 2020. Tingler broke the playoff drought that year as Tatis emerged as a superstar, Machado was an MVP candidate, and the young pitching jelled around youngster Dinelson Lamet and mid-season acquisition Mike Clevinger. The Padres finished second to the Los Angeles Dodgers in the NL West in the pandemic-shortened regular season, then defeated the St. Louis Cardinals in a thrilling Wild Card Series. However, their next opponents were the Dodgers in the Division Series, and with both Lamet and Clevinger injured, the Padres were no match for the future World Champions.

On April 9, 2021, off-season acquisition Joe Musgrove broke the curse of Preston Gomez and Clay Kirby and threw the first no-hitter in franchise history, defeating the Texas Rangers, 3-0. It had taken 8,206 games to achieve the feat.

The Padres were known in their early years for their distinctive color scheme that featured brown as their primary color, and gold as the main accent color. Some of these uniforms were rather garish, and were dubbed "mustard and mud" and compared to the corporate colors of McDonalds, but they were unmistakable. They began to move away from this in the 1980s, with blue eventually becoming the team's primary color. Bland was the operative word for these uniforms, although they did have a tradition of regularly wearing camouflage colors in honor of the large military contingent in their home city. But fans were clamoring for the return of the traditional colors, and in January 2019, the Padres indicated that this would be the case starting in 2020.

Members of Padres Hall of Fame[edit]