"I could always hit. It's not something I ever had to think too much about. A lot of guys are very scientific about it. It just seemed to come naturally, even when I was growing up." - Musial

"How good was Stan Musial? He was good enough to take your breath away." - Vin Scully

Outfielder/first baseman Stan Musial played 22 seasons in the majors, all with the St. Louis Cardinals, and won seven batting titles and three Most Valuable Player Awards. During his career, he had 3,630 hits, a National League record until broken by Pete Rose in 1981. In his best year, 1948, he led the NL in practically every important offensive category. He won three World Series crowns with St. Louis, and he was inducted into the Hall of Fame in 1969.

Musial was born in Donora, Pennsylvania, about 20 miles south of Pittsburgh (also the hometown of Ken Griffey, Sr. and Ken Griffey, Jr.; Musial and Griffey the younger also share birthdays). He was the first son and second youngest of six children to Lukasz Musial, a Polish immigrant and zinc mine worker, and Mary Lancos, who had Slovakian immigrant grandparents. Despite excelling in baseball and basketball in high school, his father wanted his son to attend college to avoid working in the mines or a steel mill. However, the youngster, a C- student, was intent on becoming a baseball player. After his father rejected a minor-league contract, Stan wept. His mother ultimately interceded and convinced her husband to allow their son a chance to pursue his goal.

Originally a pitcher, Musial was signed by St. Louis scout Andrew French in 1937 and began his pro career as a seventeen year-old with the Williamson Colts of the Mountain State League in 1938. After hitting .352 for the club the following year while putting up unspectacular pitching numbers, the Cardinals organization experimented with splitting him between the outfield and the mound. He was a success at the plate, and thanks to a sore arm and professional mentoring from manager Dickie Kerr, he moved to the outfield full time in 1941. With the Springfield Cardinals that year, he hit .379 and led the Western Association with 26 home runs in just 87 games. He was promoted to the Rochester Red Wings later that summer.

Musial was called up to the majors by St. Louis in September 1941 and found immediate success at the plate, hitting .426 in a dozen late-season contests. He became the club's regular leftfielder in 1942 and hit .315, and his team went on to win the World Series that fall. At age 22, he blossomed against the weakened war-time competition in 1943, hitting .357 and leading the Senior Circuit in hits, doubles, triples, and batting average, which allowed him to win league MVP Award. His average dipped slightly to .347 in 1944, but he still led the NL in doubles and hits once again. The Cardinals won another World Series crown that fall, and Musial led his team with 7 hits in the Series.

After missing the entire 1945 season while serving in the Navy during World War II, Musial was discharged in March 1946 and returned without missing a beat. He posted his greatest years at the plate following the war, winning five batting crowns in his first seven years back. In 1946, he led the NL in games, at bats, hits, doubles, triples, and average, and won his second MVP as St. Louis again won the World Series. He also earned his nickname "Stan the Man" that year, after sportwriter Bob Broeg wrote a column about Brooklyn Dodgers fans chanting "Here comes the man" whenever Musial came to bat at Ebbets Field.

Struggling with appendicitis and tonsilitis in 1947, Musial's numbers slipped slightly that summer, but he bounced back in 1948 to have one of the most historically dominant seasons in baseball history. He led the National League in every hitting category but home runs, which he missed by one. He almost had that one, too, except that what would have been his 40th home run was wiped out by a rain-shortened game, leaving him one behind Ralph Kiner and Johnny Mize. His batting average of .376 was more than 40 points higher than Richie Ashburn, the runner-up to the crown. He captured a third Most Valuable Player Award to cap that season.

Musial was second in National League MVP voting in each of the next three seasons. He had one of his best days at the plate on July 24, 1949, hitting for the cycle against the Dodgers, and he led the NL in hits and doubles that summer. He again won batting championships again in 1950 and 1951, also leading the circuit in triples in the latter season.

Musial's only big league pitching appearance took place on September 28, 1952. Safely in first place in the batting race, he was called in to pitch for a single batter in the first inning. The opposing batter was Frank Baumholtz of the Chicago Cubs the runner-up in the batting race, who batted from the right side of the plate. Starter Harvey Haddix moved to right field and Hal Rice covered center while Musial pitched. After Baumholtz reached base, Haddix returned to the mound, Rice to left, and Musial to center for the remainder of the game. Later in life, Baumholtz recalled that the play was a hot smash to third that should have been counted as a hit. Nonetheless, Musial captured his sixth NL batting crown with a .336 average.

Musial scores the winning run at the '55 All-Star game

Musial hit .337 with a career-high 53 doubles in 1953, and even though he still struck fear into pitchers, "The Man" slowed a bit after that season. Facing the New York Giants on May 2, 1954, he hit five home runs in a doubleheader to set a record (later tied by Nate Colbert). He moved from the outfield to first base the following summer, and in that year's All-Star Game, he hit a game-winning home run in the 12th inning. He won his seventh batting title in 1957 and recorded his 3,000th big league hit during the following campaign.

In 1959, Musial slumped to a .255 average, the first time in his career he hit under .300, and he remained below that mark in each of the next two years. However, he was not done yet, hitting .330 in 1962 at age 41 to become the oldest modern-era player to record a .300 BA/.400 OPS/.500 SLG season. In the same year, he became the oldest ever to hit four consecutive home runs. After his average dipped to .255 again in 1963, he retired following the season with 25 years of service in the St. Louis Cardinals organization. 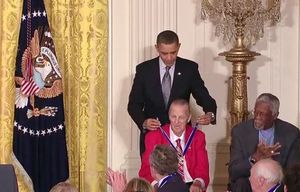 Musial is also widely honored within the Polish community. In 1972, he achieved the unique distinction of becoming the first foreigner to receive the Polish government's Merited Champions Medal, their highest sports award, and he was also awarded Poland's highest civilian honor, the Cavalier's Cross Order of Merit. He became the first inductee into the Polish-American Sports Hall of Fame in 1973 and is also in the Polish National Hall of Fame. Stan Musial Stadium in Kutno, Poland was dedicated in 2000.

The baseball Musial hit for his 3000th base hit is in the Smithsonian Institution. In June of 2013, the United States Congress voted to name a new bridge spanning the Mississippi River on I-70 in St. Louis the "Stan Musial Veterans Memorial Bridge".

Musial was the General Manager of the Cardinals in 1967, when they won the World Series, and worked in their front office through 1980. A beloved figure in St. Louis, he owned Stan & Biggie's restaurant there for many years (it has since closed). His hobbies include playing the harmonica: he has released a recording of his playing and had played at major events including Hall of Fame induction ceremonies.

Musial is an honorary member of the board of the NFL's St. Louis Rams, and he has acted as Director of the Professional Baseball Players of America. Civic endeavors have included chairing the President's Council on Physical Fitness under President Lyndon B. Johnson, and for twenty years, the Crippled Children's Society of St. Louis. He co-chaired the committee planning the papal visit to St. Louis and served on the Baseball Hall of Fame Committee on Veterans. He has also served on boards of directors of the U.S.O., the Urological Research Foundation, and Shelter the Children.

Musial passed away in his suburban St. Louis home on January 19, 2013. He was 92 and had been suffering from Alzheimer's disease for years. Fellow Hall of Famer Earl Weaver died on the same day. Musial was a tremendous icon in St. Louis, and his death triggered a very public tribute lasting more than a week, including a public visitation of his casket and a funeral broadcast on local television on January 26th. The following day, the National Hockey League' St. Louis Blues paid tribute by all wearing jerseys with Musial's number 6 and his name for their pre-game skate, taking inspiration from what the Montreal Canadiens had done in honor of Gary Carter a year earlier. The Cardinals paid him tribute before their home opener on April 8, 2013, unveiling a large sign on the outfield fence at Busch Stadium with his name and number 6.

Musial married Lillian Labash, also from Donora, on November 21, 1939 (his 19th birthday). They eventually had four children: son Richard and daughters Janet Musial Schwarze, Geraldine, and Jean, as well as 11 grandchildren and 7 great-grandchildren. His son was a track star at Notre Dame. 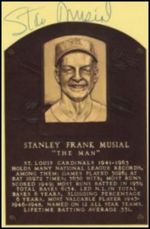