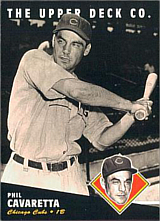 “I was honored to be dressing next to the great Phil Cavarretta... I admired his hustle. He was a real competitor, and one of the most popular players in Chicago.” - Andy Pafko

"Phil Cavarretta came out of the park (Ebbets Field) on a day when he went something like 6-for-8 in a doubleheader and the Cubs had managed to lose both games in the ninth inning... And Cavarretta did not feature losing. And these (Brooklyn) kids came at him. Several Cub players were walking virtually in a convoy, and he was at the head of it, and he kept saying 'Nothing, nothing, nothing.' He had on a black hat, black shirt, white tie. And the face on him -- in his youth, he had his jaw set in a line and his eyes fierced up -- he looked like a hit man. And he reached the top of the subway on his way down and with these Oliver Twist, Faganish kids hanging around him, one of them called him a '[slur deleted]' and BADOOM he pushed the kid right down the subway stairs. It looked like Richard Widmark with the lady in the wheelchair." - John Belson, on just how Brooklyn kids could rub athletes the wrong way, to Peter Golenbock, Bums: An Oral History of the Brooklyn Dodgers 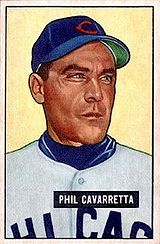 Nicknamed "Philabuck" by Charlie Grimm, Phil Cavarretta could very well have been "Mr. Cub" before Ernie Banks came along and accepted the mantle. Phil was a four-time National League All-Star and the 1945 NL MVP with the Chicago Cubs who played a whopping 22 (1934 to 1955) seasons entirely in Chi-town, his final two seasons with the White Sox.

Born and bred in Chicago, Phil reached the majors just two months after his 18th birthday, becoming a regular a year later as the Cubs went to the World Series, with a cast featuring Hall of Famers Kiki Cuyler and Gabby Hartnett. Phil played in the Cubs' final three Fall Classic appearances before their finally breaking the 108 year drought in 2016. In 17 Series games, he hit .317/.358/.413 with a home run, 5 RBI and 9 runs scored. Following the '35 season, he manned first base more or less regularly into the 1940s, seeing some action in the outfield a few seasons, while missing a large amount of time each year from the pennant winning 1938 season to 1940 with a recurring hip problem and a broken ankle (twice) from sliding.

In 1951, Phil became a playing manager, seeing less action while steering the Cubs, whose record was routinely miserable during his tenure through no real fault of his own. In 1953, he established a new Cubs record for most games played by passing Stan Hack, only to be passed by Ernie Banks fifteen years later. Released as a player after that season, Phil was booted out of his manager's chair during spring training 1954 after admitting to reporters he did not think the team would finish higher than fifth. He signed with the White Sox in May as the Cubs staggered to a seventh place finish. Phil hit .316/.417/.411 in 71 games (158 at bats) in 1954, hanging up his spikes after 6 hitless games in 1955.

Phil finished his career with a .293/.372/.416 slash line, swatting 1,977 hits and scoring 990 runs in 2,030 games. He was the only player in the majors who was both active in 1934 when Babe Ruth was still playing for the New York Yankees, and also active in 1954 when Hank Aaron started. Oddly enough, he was not one of the five oldest players in the league when he played that season. He was the last surviving big leaguer to have played when The Babe played, as well as the last surviving member of the 1935 and 1938 Cubs World Series teams. Along with Lennie Merullo and Andy Pafko, he was one of the last three surviving members of the Cubs' World Series team in 1945.

Cavarretta was later a coach with the Detroit Tigers from 1961 to 1963 and a member of the New York Mets staff from 1975 to 1978. Starting in 1973, he had been the Mets' full-time hitting instructor, roving the minor leagues after finishing spring training with the major league club.