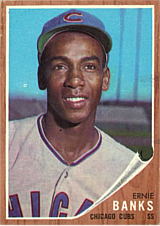 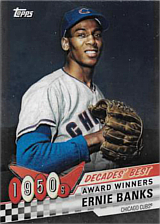 Ernie Banks was a Hall of Fame shortstop and first baseman who played his entire major league career with the Chicago Cubs, delighting Wrigley Field fans with his easy power, steady fielding and cheerful disposition. He was the National League's first back-to-back MVP award winner, a fourteen time All-Star, and slammed 512 career major league home runs. Five times "Mr. Cub" topped 40 homers as a shortstop, peaking at 47 in 1958, an unprecedented display of power from that historically fielding-oriented position that would stand for almost half a century before being surpassed in baseball's Steroid Era in the late 1990s and early 2000s.

Even though Banks was voted to the All-Century Team as a shortstop, he actually played more games at first base. Banks is indelibly linked with his signature quip, "Let's play two," an infectious display of enthusiasm for the game he spread to generations of baseball fans throughout his life.

A four-sport standout in high school, Banks was scouted and signed at 17 by the Negro League's Kansas City Monarchs' traveling team's manager, the legendary Cool Papa Bell. He made his debut on June 4, 1950, and played the remainder of the season before being drafted into the Army in 1951. Stationed in Europe, he played shortstop for the 242nd Group Barons, part of a baseball conference run for American servicemen there.

While abroad, he was informally scouted by a player in the Cleveland Indians minor league system. According to a story told by a former comrade, Banks then received a letter from Cleveland GM Hall of Famer Hank Greenberg inviting him to try out with the Indians when his hitch was up.[1] Upon his discharge, Banks returned to the Monarchs for the 1953 season. Actively scouted during the year by the Cubs, he signed a big league contract with them on September 8, 1953. Banks played his last game for the Monarchs on September 13th and joined the Cubs four days later, never having played a single game in the minor leagues.

Banks was originally signed by Chicago to give their first black player, 28-year-old shortstop prospect Gene Baker, some company. As fate would have it, an injury to Baker caused Banks instead to become the first black player to appear in a Cubs game late in 1953. He did not sit down again for a record 424 games. Banks' immediate prowess with both bat and glove moved Baker over to second base, where the duo formed Chicago's double play combo from 1954 to 1956.

Banks turned in a solid performance in 1954, good enough to finish second in the Rookie of the Year voting, behind Wally Moon, but ahead of Gene Conley and fellow future baseball great Hank Aaron. His 19 home runs were the National League rookie shortstop record for 53 years. Banks turned on the power almost overnight in 1955, rocketing 44 homers and smashing a record five grand slams. His 117 RBI made him the first shortstop in NL history to have a 30 home run, 100 RBI season in the league's first 135 years, a feat he would repeat four more times. He was also named to his first of fourteen All-Star teams, kicking off an eight-straight season skein.

After a solid 1956, Banks proved 1955's power surge was no fluke by lacing 43 homers and 102 RBI in 1957. He then set a personal best, and still NL shortstop record, by cracking 47 homers in 1958. In addition to batting an NL #6th best mark of .313 and leading the league in round trippers, he topped the circuit in RBI (129), slugging (.614), and total bases (an all-time NL shortstop record 379). This career defining performance won him his first MVP Award, the 1958 trophy. Banks then repeated the feat, winning the 1959 National League Most Valuable Player Award with an NL 10th best .303 batting average, 45 homers, and an outstanding 143 RBI, which was again a record for NL shortstops. The encore made Banks the first National Leaguer to garner the Senior Circuit's top honor in back-to-back seasons.

Banks topped the NL again with 41 homers in 1960, but it would be the last time he would reach 40 or lead the league. He also received his only Gold Glove, putting up a solid fielding percentage and showing above average range. His offense slipped some in 1961, a season split for the first time between shortstop (104 games), outfield (46), and first base (7), yet his fielding percentage and range factor at short were still above the league average. Still, to give an idea of how dominant he was with the bat as a shortstop, as of 2019 there have been only six seasons in the National League in which a shortstop has had 80 or more extra-base hits; Banks is responsible for three of those, with Jimmy Rollins, Hanley Ramirez and Trevor Story accounting for the other three.

Determined to extend Banks' career, the Cubs found a permanent home for him at first in 1962. Before he hung 'em up, he would play more major league games there than he had at short (1,259 to 1,125). Even with the wear and tear-saving move Banks was not as good in the second half of his career as he had been in the first. His OPS+ scores were much lower, although he did hit 37 home runs in 1962 and 32 in 1968. As a fielder, he was above average in range and fielding percentage, though it is never given the credit due. Even late in his career, he was respected for the skills and attitudes which he brought to the game, finishing in the top 15 in the MVP voting each year from 1967 to 1969.

Banks spent his later years with the club as a player/coach, then two seasons as a full-time coach after retiring. He played 2,528 games in the regular season, but not a single one in the postseason, a record he became known for but happily would never have held. He long owned the major league record for most consecutive games from the start of his career, playing 424 straight after his brief but convincing 1953 debut. The mark was broken in 2005 by Yankee Hideki Matsui, a multiple time All-Star in the Japanese leagues before arriving in the big leagues mid-career as a 29-year-old "rookie", whose streak ended at 518 in 2006. 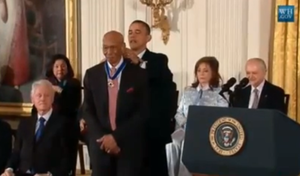 Banks being awarded the Presidential Medal of Freedom by President Obama, November 2013.

Banks was elected to the Baseball Hall of Fame in his first year of eligibility on January 19, 1977, having received 83.8% of the votes of the Baseball Writers Association of America. He also became the first Cubs player to have his uniform number retired by the team when his number 14 was set aside in 1982. On August 8, 2013, he was a recipient of the Presidential Medal of Freedom, the nation's highest civilian honor, by President Barack Obama; the medal was given to him at the White House on November 20th that year. Former President Bill Clinton was among those who received the medal from the president that day.

Banks was known for his sunny disposition and ready quips for sportswriters.

Each spring training he would be asked by Chicago sportswriters how the Cubs would do that season. While few of his predictions were accurate, they remain cheerful reminders of his unquenchable enthusiasm for baseball, the Cubs, and life:

Ernie died of a heart attack in Chicago, IL on January 23, 2015 at 83. Mayor Rahm Emanuel marked his passing by temporarily moving his statue, which has stood outside Wrigley Field since 2008, to Daley Plaza in order to allow more fans to pay their respects (the statue had become inaccessible because of renovation work being conducted at Wrigley that offseason). The Cubs elected to wear a patch with number 14 on their uniform in his honor during the 2015 season and organized a pre-game ceremony in his honor at Wrigley Field on April 5th.

Banks was married four times and was in the process of finalizing his divorce with his last spouse when he died. As a result, there was some dispute over provisions in his will regarding his final wishes, as his final caretaker said that he had expressed the wish that his ashes by dispersed over Wrigley, while his ex-spouse wanted the terms of his most recent will, which did not mention such a wish to be honored. This led to some confusion as to what was going to be done with his body. In the end, the city of Chicago stated that he had been interred in Graceland Cemetery on the city's north side.

Additionally, Banks was the uncle of catcher Bobby Johnson. 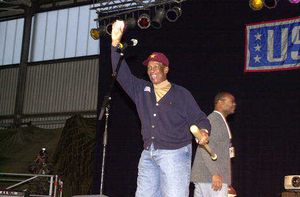 Banks greets the audience at Ramstein Air Base, Germany, during the Secretary of Defense Holiday Show 2000