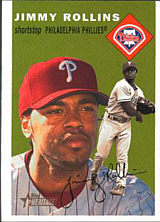 Jimmy Rollins was the long-time leadoff hitter and starting shortstop for the Philadelphia Phillies. One of the fastest players in the game, Rollins consistently had about 30-40 stolen bases a year. Rollins also had a strong arm and was one of the top fielding shortstops in the game. Rollins was often criticized for swinging at the first pitch, which often led to him flying out or grounding out.

Rollins placed 3rd in the Rookie of the Year Award voting in 2001, with 44 points, behind Albert Pujols and Roy Oswalt.

He became the first player in major league history to hit the first inside-the-park home run in two different parks in the same year, doing it in Citizens Bank Park against the Kansas City Royals and Petco Park against the San Diego Padres, both in 2004.

On September 27, 2005, Rollins broke the Phillies record by getting a base hit in his 32nd consecutive game. The previous record of 31 games was set by Ed Delahanty in 1899. He finished the season with a 36-game hitting streak, the longest to close a season in history. The streak continued for two games at the start of the 2006 season, giving him a 38-game hitting streak overall, the 8th longest in Major League history. In 2006, he became the first Phillies shortstop to hit 17 home runs in a season since Granny Hamner over 50 years ago. He teamed up with Chase Utley to become the first Phillies double play combination to each hit 20 homers in a season and the first National League double play combination to hit at least 25 home runs each.

Rollins became the 4th player in MLB history to hit 20 doubles, 20 triples, 20 home runs and steal 20 bases in the same season when he did so in 2007. He followed Frank Schulte (1911), Willie Mays (1957) and Curtis Granderson (also 2007). That performance was part of an outstanding year that earned Rollins the 2007 National League Most Valuable Player Award. His production fell back a bit in 2008 and while he was not an MVP candidate, he did lead the Phillies to only the second World Series title of their long history, a 4 games to 1 triumph over the Tampa Bay Rays.

In July 2010, Rollins had the lone RBI in back-to-back 1-0 wins. No National Leaguer had done so since Roger Maris of the 1968 St. Louis Cardinals.

In 2014, he made his 14th consecutive Opening Day start for the Phillies, tying Cal Ripken Jr.'s record for consecutive starts at shortstop for one franchise on Opening Day. Rollins responded in style with a grand slam off Tanner Scheppers of the Texas Rangers in a 14-10 Phillies win. On June 13th, he tied Mike Schmidt's club record for base hits with his 2,234th safety, and set a new record the next day. He hit .243 in 138 games that season.

He was the recipient of the Roberto Clemente Award, along with the Chicago White Sox's Paul Konerko, after the 2014 season, in recognition of his on-field excellence and service to the community.

On December 19, 2014, he was traded to the Los Angeles Dodgers in return for minor league pitchers Zach Eflin and Tim Windle. He had played 15 seasons and over 2000 games for the Phillies. In his debut for the Dodgers on Opening Day on April 6, 2015, he hit a tie-breaking three-run homer in the 8th off Shawn Kelley of the San Diego Padres to give his new team a 6-3 win. But the season was not so great. He hit only .224 in 144 games, the lowest batting average of his career, with 24 doubles, 13 homers, 71 runs scored and 41 RBI. The Dodgers ran away with the NL West title, but he did not play much for a two-week stretch in September, when the team decided to give top prospect Corey Seager an extended look at shortstop. The youngster hit very well and ended up the starter for much of the Division Series against the New York Mets, as Rollins only started Game 3 and made three other late-game appearances, going 1 for 7, as the Dodgers suffered an early exit from the postseason.

It was clear that Rollins was not in L.A.'s long-term plans and they did not make an effort to re-sign him when he became a free agent after the season. Worse, it took him until February 22, 2016, a week after spring training opened, to find another job, and it was only a minor league contract with the Chicago White Sox. There was at least an opportunity, given the White Sox had traded long-time starter Alexei Ramirez during the offseason, with second-year man Tyler Saladino as his main competition for the starting job. He was the starter for the first two months of the season, hitting .221 in 41 games, but he lost the job when the White Sox called up rookie Tim Anderson on June 10th and installed him as the starter. On June 15th, he was handed his unconditional release.

This looked to be the end of the line for Rollins as he was coming off two poor offensive seasons at age 37, but in December of 2016, he signed a minor league contract with the San Francisco Giants, hoping to win a job as a utility infielder. He was unsuccessful in his bid, being released just as spring training was winding down on March 31st.

In 2019, he returned to the Phillies as a spring training instructor and also to work on community outreach initiatives. He has also been a regular studio analyst on MLB on TBS.

Rollins is the cousin of outfielder Tony Tarasco. Another cousin, Osiris Johnson, was drafted by the Miami Marlins in the 2nd round of the 2018 amateur draft. As a kid growing up in the Oakland area, Rickey Henderson was his favorite player. In Oakland, he often played against future major league pitcher Dontrelle Willis.