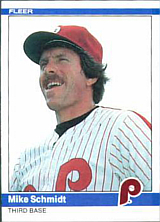 "No other third baseman ever did what he did with both his bat and his glove. Not Brooks Robinson, not Eddie Mathews, not Pie Traynor." - Dave Anderson of the New York Times, writing in 1989 after Mike Schmidt retired

Due to his blend of fielding skill, power and patience, Mike Schmidt is considered perhaps the best all-around third baseman in major league history.

Schmidt played high school and college baseball in Ohio and was a second-round pick of the Philadelphia Phillies in the 1971 amateur draft. The Phillies were, to put it mildly, in rebuilding mode, and by late 1972 Schmidt was in the starting lineup. A graceful fielder at third base (he was the Phillies' emergency shortstop for many years), a fast runner with keen instincts on the basepaths, Schmidt was initially overmatched at the plate, batting .196 in his rookie season (1973) with only flashes of power. He struck out at a hideous rate in 1973, earning him what seemed a lifetime default level of boos at Veterans Stadium. Phillies fans never really took in that Schmidt walked at an equally astonishing rate that made his strikeouts fairly irrelevant.

Things seemed to turn around for Schmidt in a single at-bat in the bottom of the 9th inning against Tug McGraw of the New York Mets (whom he would later be a teammate of) on Opening Day, April 6, 1974. With the Phillies trailing 4-3, Schmidt hit a walk-off home run to win the game. He only hit two more home runs in April, but flirted with .300 all season, finishing at .282 with the first of three consecutive home run championships.

By 1979 the Phillies were a perennial power in the NL East, Schmidt was an annual Gold Glove winner, All-Star, and home run champ, and the team itself had been through three devastating playoff losses, confirming to many Philadelphia fans that the club, and Schmidt in particular, had talent enough to reach a certain level but not the wherewithal to transcend it.

Things changed in a hurry again in October of 1980, as Schmidt hit his 48th home run to break a tie in extra innings of the division-clinching game against the Montreal Expos' Stan Bahnsen. He was to add 7 RBI in the World Series and take home season and Series MVP trophies for the champion Phillies, erasing doubts about his clutch ability forever. Schmidt's 48 homers in 1980 were the MLB record for a third baseman until broken by Alex Rodriguez 27 years later.

By 1985, the Phillies had moved Schmidt to first base, a move that fans and Schmidt himself chafed at; at one point, stupefied by boos, Schmidt broke the tension by taking the field in a garish fright wig. Back at third base, he won a third MVP award in 1986, leading the league in HRs for the eighth time and RBI for the fourth. 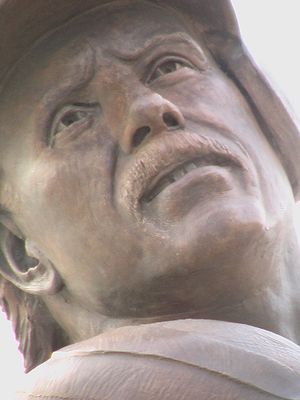 Close-up of the statue outside Citizens Bank Park

Due in part to a rotator cuff injury, Schmidt notably declined at the plate during the 1988 season and ultimately missed the last third of the year due to the injury. When he returned at the start of the 1989 season, his skills had declined even further. Dissatisfied with anything less than greatness, he retired suddenly on May 29th. That season he became the first retired player to be voted on to the All-Star team, and while he did not play, he did take part in the opening ceremonies. He retired holding the record for most RBI as a third baseman, with 1,419 of his career RBI coming in the role; he also holds the record for home runs hit as a third baseman, with 509.

In retirement, Schmidt has stayed on the margins of baseball. He was a Phillies broadcaster in 1990 and briefly managed the Phillies' Florida State League Clearwater Threshers affiliate in 2004, but did not seem satisfied with life in the minors either. In 2005, he emerged as a candidate to replace Lou Piniella as manager of the Tampa Bay Devil Rays, but that came to naught. He did other intermittent broadcasting work over the years and in 2014, he was added to the Phils' television crew for Sunday home games.

A hard-nosed, cerebral, fiercely attentive player, Schmidt was notably influenced by Dick Allen and Pete Rose in his style of play, though he never became as outspoken as those teammates.

Much like Wade Boggs' fondness for chicken, Schmidt always credited his superstition of eating three pieces of buttered wheat toast before every game (unless it was a double-header, in which case he wouldn't have any) for his success at the plate.

In terms of playing style, the most indelible image of Schmidt is probably his handling of chopped ground balls on the artificial turf at Veterans Stadium and other NL parks: charging furiously from third, barehanding the ball on its descent, and whipping it to first base in one motion. He is generally conceded to be among the greatest third basemen of all time, and was a first-ballot Hall of Famer in 1995, being elected on January 8th by the Baseball Writers Association of America. He was also a 1990 inductee of the Philadelphia Baseball Wall of Fame, the same year his #20 was retired by the Phils. His first baseball card appearance was in the 1973 Topps set.