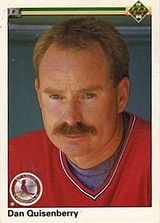 "I became a better pitcher when I found a delivery in my flaw." - Dan Quisenberry 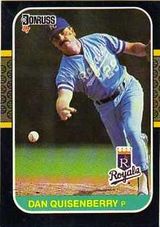 Quisenberry attended the La Verne College and in 1975 went 19-7 for them, including a 13-game winning streak. He led the team to third place in the NAIA World Series after pitching a complete doubleheader. He credited La Verne coach Ben Hines for developing his submarine style.

Undrafted out of college, Quisenberry was signed for the Kansas City Royals by scout Rosey Gilhousen. He made his big league debut with the Royals in 1979 and soon established himself as their bullpen stopper. Except for 1981, when Rollie Fingers had a superlative season and was the American League MVP, he led the American League in saves every season from 1980 to 1985. During that time, he won five Rolaids Relief Awards, was named Fireman of the Year five times, and was selected to three All-Star teams.

Quisenberry saved a then-record 45 games in 1983 and notched 44 saves the following year. He was a key member of the Royals squad that went on to win the 1985 World Series over the St. Louis Cardinals. However, he was let go by the Royals during the 1988 season. He spent a year and a half with the St. Louis Cardinals before ending his career with a brief stint with the San Francisco Giants in 1990.

During his career, Quisenberry never went on the disabled list. Away from the field, he was known for his poetry, sense of humor, and sharp intellect. He died of brain cancer in 1998 at the age of 45. He was inducted into Kansas City Royals Hall of Fame that same year. A book of his poetry, On Days Like This, was published the year of his death.

"I've seen the future and it's much like the present, only longer." - Dan Quisenberry

"There's no homework." - Dan Quisenberry, asked what he likes best about baseball