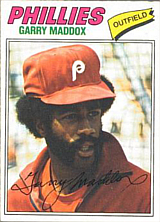 Garry Maddox was the pre-eminent defensive center fielder of his day, winning 8 Gold Gloves, and could also hit a bit. He was a member of the 1980 World Series champion Philadelphia Phillies.

He was a 1968 second-round draft pick by the San Francisco Giants out of high school. The Giants would also draft George Foster and Gary Matthews that year. He hit .252 for the Salt Lake City Giants and .316 for the Fresno Giants in 1968.

Maddox served in the Army, including a tour in Vietnam, during the 1969 and 1970 seasons. Exposure to chemicals in Vietnam left his skin highly sensitive, and he has always since worn a full beard to protect his face. The Philadelphia Phillies had to waive their clean-shaven rule to accommodate Maddox.

A perceived surplus of outfielders led the Giants to trade Garry, early in 1975, in return for the Philadelphia Phillies' popular slugging first baseman Willie Montanez. Maddox would win Gold Gloves as the Phillies' center fielder for the next eight years, and play key roles on five postseason teams, including the 1980 World Champions. He drove in the pennant-winning run in the 1980 NLCS. His style in the outfield, somewhere between a lope and a glide, was inimitable. With only an average arm, he specialized in running down drives that nobody else could catch, and his speed and jump on the ball helped on the springy artificial-turf surfaces of Veterans Stadium and other NL parks of the 1970s and 1980s.

Maddox is a quiet, thoughtful man, immensely respected by teammates; "he reads hardcover books," one of them remarked. He attended Temple University in Philadelphia after his playing days. Maddox became CEO of an office furniture company in Philadelphia, and was elected a director of the Philadelphia Federal Reserve Bank for the term 2003-2006. He was also a Phillies broadcaster from 1987 to 1989 and 1991 to 1995. Also a renowned barbecue chef, Maddox co-hosts an annual barbecue competition that is sponsored in part by the Phillies and takes place at Citizens Bank Park.

Maddox received induction into the Philadelphia Baseball Wall of Fame in 2001. He is the father of former minor league outfielder Garry Maddox II.