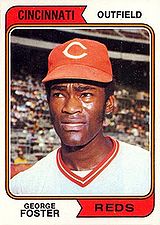 "I don't know why people like the home run so much . . . The triple is the most exciting play of the game. A triple is like meeting a woman who excites you, spending the evening talking and getting more excited, then taking her home . . . You're never sure how it's going to turn out." - George Foster, in a year when he hit 7 triples 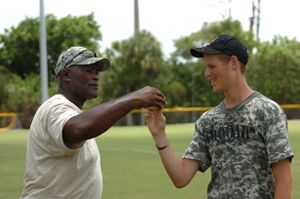 Foster helps a young man with his pitching, 2011

He originally came up with the San Francisco Giants but saw little playing time in the outfield behind Willie Mays, Bobby Bonds and Ken Henderson at a time the Giants were churning out outfielders by the bushel-load and had no idea what to do with all of them. During the 1971 season, he was traded to the Cincinnati Reds for the forgettable duo of infielder Frank Duffy and pitcher Vern Geishert. Duffy played 21 games for the Giants, then became a good-field no-hit shortstop with the Cleveland Indians; Geishert never pitched in the majors again. Foster played sparingly his first several years in Cincinnati, but by 1975 emerged as a key member of the Big Red Machine that was so successful in the 1970s. He stayed with the Reds for over a decade, and then played most of the rest of his career with the New York Mets, signing a lucrative five-year, $10 million deal prior to the 1982 season.

"I'm George Foster, I love this team! The Mets are better than the Red Machine..." - Foster's opening lines in the Mets' 1986 rap single, "Get Metsmerized

Foster's power numbers never lived up to his heyday with the Reds as a Met. Smelling gobs of money, he was the driving force in the Mets first single of 1986, "Get Metsmerized", recorded after the very first game of the 1986 season. By the time of the single's official release, he had been released himself to make room on the roster for former Met All-Star Lee Mazzilli. George's release coincided with his comments claiming that his loss of playing time in 1986 was racially motivated, despite the fact he had been replaced in the lineup by another African-American, Kevin Mitchell. He finished his career with 15 games with the Chicago White Sox.

Foster was hired as a cross-checker scout for the Orix Buffaloes in 2010. In 2003, he was inducted into the Cincinnati Reds Hall of Fame.