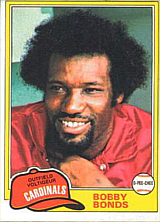 "He was as fast as anyone I've ever seen. He had great power, and he was a terrific outfielder with better arm strength than Barry." - Sonny Jackson, talking about Bobby Bonds

"They said I was supposed to be the next Willie Mays... I probably had more success than anyone they ever put that label on." - Bobby Bonds, talking about the pressure to reach maximum potential 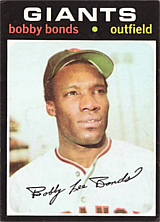 The father of slugger Barry Bonds and Bobby Bonds, Jr. (who was drafted but never made it to the majors), Bobby Bonds almost became the first member of the 40-40 club in 1973, when he hit 39 homers and stole 43 bases. During his time as a major league player, Bonds slugged 332 home runs and stole 461 bases in a 14-year career, as well as winning three Gold Gloves. Bill James once used Bobby, in discussing the Hall of Fame, to explain the difference between a "great" player who belonged in the Hall and a merely "excellent" player (Bobby as the prime example of someone who was truly excellent but not great). Former teammate Darrell Evans, who played many years in both leagues, once described Bonds as the most talented all-around player he had seen in his 20-year major league career. The great Willie Mays steadfastly insisted that Bonds should be in the HOF. None of the most similar players to Bobby are in the Hall, although the list of most similar players includes some top-flight stars such as Jack Clark, Fred Lynn, Curtis Granderson, George Foster, and Reggie Smith.

Bobby, who was born and died in California, was signed in by the San Francisco Giants 1964, the same year his son Barry was born. He came up originally in 1968, in the heart of the pitchers' era, after hitting .370 for Phoenix in the first part of the 1968 season. Bonds became the first player in many decades to record a grand slam as his first hit. He showed tremendous talent in his first full season with the Giants in 1969, hitting 32 home runs, drawing 81 walks, stealing 45 bases (being caught only 4 times) and scoring 120 runs. In 1970, he hit peaks with 10 triples, 36 doubles, a .302 batting average, and 48 stolen bases. Bonds went on to become a threat each year to hit 30 home runs and steal 40 bases. He was notable as a strikeout-prone slugger who nevertheless often hit in the lead-off position. As a result, during his career, he scored over 200 more runs than he drove in. 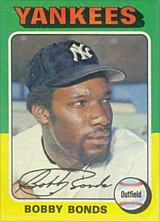 After seven years with San Francisco, Bonds was traded to the New York Yankees. He played in New York for one season, 1975, when he hit 32 home runs, stole 30 bases, and drew 89 walks but only scored 93 runs on a team that was otherwise weak. He came to the Yankees in a trade for Bobby Murcer, a trade that was not particularly popular with Giants fans. He next spent two years with the California Angels, of which the second, 1977 was notable when he hit 37 home runs and drove in a career-best 115 RBI, adding 41 stolen bases. The next year, he hit 31 home runs and stole 37 bases while playing for the Chicago White Sox early in the season and then the Texas Rangers for the rest of the year. In 1979, he hit 25 home runs for the Cleveland Indians, but his stolen base percentage dropped as he stole 34 while being caught 23 times.

In 1980, although only 34, he gradually became a backup with the St. Louis Cardinals. By this point, his moving from team to team every season had become so notorious that Terry Cashman included the line "and Bobby Bonds can play for every team" in his 1981 hit single "Talkin' Baseball (Mickey, Willie and the Duke)", when talking about baseball at the beginning of the 1980s. In 1981, with the Chicago Cubs, he played poorly on a team that became the butt of nationwide jokes, and his career was at its end. Bonds hustled for the Cubs, but he just did not have it any more. In 1982, he signed with the Yankees, but never made it back to the majors, and his career as a major leaguer was over. In 1989, Bonds suited up one more time for the St. Lucie Legends of the Senior Professional Baseball Association, and later replaced Graig Nettles as the club's manager. In 43 games, he hit .306 and hit 5 home runs. 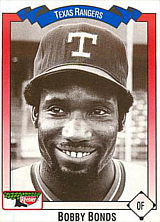 Bobby Bonds was, of course, most famous for his power/speed combination, having the best power/speed number nine times. He never led the league in home runs, but was in the top five in the league four times, and never led the league in stolen bases but was in the top five a total of five times. He was also famous for his strikeouts, finishing in the top five a total of nine times, setting the record for strikeouts in a single season (since broken by Adam Dunn and now held by Mark Reynolds), with 189 in 1970. He has since fallen out of the top 10 on the all-time list for strikeouts, as many later sluggers adopted his style of going for broke in every at-bat, strikeouts be damned.

Bonds never appeared in a World Series, but was an All-Star three times. He was never an MVP, although he finished in the top five twice. He won three Gold Gloves as a young player. His playing style had a lot of similarity with that of his son, Barry, who also was a home run hitter, base stealer and Gold Glove winner, particularly in the early part of his career when he still struck out regularly. They hold the record for both most home runs (1,094) and most stolen bases (975) by a father-son duo in MLB history. They also lead in runs (3,485), RBI (3,011), total bases (9,292), strikeouts (3,296), and bases on balls (3,472) among other offensive categories. The younger Bonds became known for walking many more times than he struck out, something Bobby never mastered. Rick Reuschel, Ken Oberkfell, Mel Hall, and Danny Darwin all played with both Bobby and Barry Bonds.

After his playing days ended, Bonds was a Cleveland Indians coach from 1984 to 1987 and a member of the San Francisco Giants staff from 1993 to 1996. Bonds underwent surgery to remove a cancerous tumor from his kidney in 2002 and died of complications from lung cancer and a brain tumor at age 57 during the 2003 baseball season. He was sadly not around to see his son pass Hank Aaron's all-time career record for home runs.

One source: The New York Times obituary of Bobby Bonds.