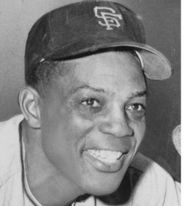 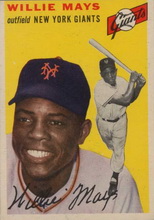 Inducted into Hall of Fame in 1979

"There have been only two geniuses in the world. Willie Mays and Willie Shakespeare." - Tallulah Bankhead

"This man dominates a game like no other player in the history of the game. I don't think there is any play he can't make." - Charlie Fox, Giants manager, 1971

Willie Mays is one of the three or four players who are considered when observers try to decide who is the game's all-time greatest player. He was the complete player, with tremendous home run power, incredible fielding ability, a high batting average, good on-base percentage, great speed, and a nice guy.

Before joining the New York Giants in 1951, Mays played three seasons with the Negro League Birmingham Black Barons. Mays missed the 1953 season serving in the military.

Mays made one of the greatest catches and throws of all time in the 1954 World Series, which is described here: The Catch.

Mays homered in the first four games of 1971, a record. It would not be matched for 27 years until Mark McGwire tied it. Others have since followed suit.

Mays returned to New York in 1972 when the Giants traded him to the New York Mets for pitcher Charlie Williams. He had the game-winning RBI for the Mets in the 12th inning of Game 2 of the 1973 World Series, his next-to-last career game.

He and Stan Musial are considered the greatest players in the history of the All-Star Game. He was the first winner of what is now the "Roberto Clemente Award", given to a player for his contributions off the field, in 1971; it was known as the "Commissioner's Award" at the time, before being renamed following Clemente's tragic death after in 1973.

He was elected to the Baseball Hall of Fame on January 23, 1979 by the Baseball Writers Association of America in his first year of eligibility garnering 94.6% of the vote.

On February 2, 1983, Hall of Famers Mays and Mickey Mantle accepted greeter positions at a casino in Atlantic City, NJ. The next day, Commissioner Bowie Kuhn banned both of them. On March 18, 1985, Commissioner Peter Ueberroth reinstated both men. 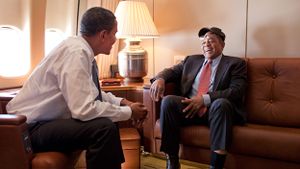 Mays speaks with President Obama aboard Air Force One, flying to the 2009 All-Star Game

Mays guest-starred on several episodes of The Donna Reed Show, once with his longtime rival, pitcher Don Drysdale of the Los Angeles Dodgers. Each played himself. In keeping with his reputation for throwing high and tight, Drysdale threw one pitch that caused Mays to bend away to avoid being plunked. The plot concerned the players' competition to sign hot prospect Jeff Stone, Reed's son on the show, to one of their clubs. Actor Paul Petersen played the son. In keeping with the feel-good endings of 1960s sitcoms, Jeff elected to continue his education rather than seek a pro career. Mays also played himself on episodes of the TV sitcoms My Two Dads and Mr. Belvedere. He provided his own voice in the cartoon special Willie Mays and the Say-Hey Kid in 1972.

He is the godfather of Barry Bonds, the son of long-time teammate Bobby Bonds. When Barry finally had his number retired by the Giants in 2018, 11 years after breaking Hank Aaron's all-time homer record and joining Mays whose own number 24 had been retired decades earlier, he made one of his last public appearances to call for Bonds to be elected to the Hall of Fame and for a statue of his to be erected outside AT&T Park, next to his own. Willie,s number 24 had been unofficially retired by the Mets as well, although issued a few times after his two-year passage with the team. It was officially retired in 2022.

In 2007, Mays was voted onto the Rawlings All-Time Gold Glove Team, the player from the earliest era chosen. His first baseball card appearance was in the 1951 Bowman set. He was featured in the first modern Topps set issued in 1952, and then in every subsequent yearly set issued by the company until 1973, when he was the last player to have appeared in the original set to be still active. On November 16, 2015, he was announced as a recipient of the Presidential Medal of Freedom, the country's highest civilian honor, to be given by President Barack Obama; Yogi Berra was also on the list of 17 persons so honored that year, in a posthumous capacity. In 2017, the World Series Most Valuable Player Award was re-named the Willie Mays Award in his honor. In 2020, when MLB announced that it would henceforth recognize the Negro Leagues as major leagues, it was immediately noted that among the all-time home run leaders, Mays would be the main player to gain from the decision, as he had in fact hit at least one home run for the Birmingham Black Barons in 1948, changing his career total from the iconic 660 to at least 661 (more homers could potentially be uncovered, as boxscores had not yet been discovered for all official Negro League games).


Kluszewski Campanella
Talkin' baseball
The man and Bobby Fella
The Scooter, the Barber, and the Newc
They knew them all from Boston to Dubuque