Note: This page is an article about what is a baseball card; see Category:Baseball Cards for more links.

A baseball card is a type of trading card, usually printed on card stock but in some cases on some other type of material. The cards normally have a picture of a baseball player, or a group of baseball players, on the front, and some biographical information, statistics, or advertising on the card backs. Baseball cards are produced for almost every level of the sport, with some card companies specializing in minor league player cards, and have a history that dates back to the game's earliest days. 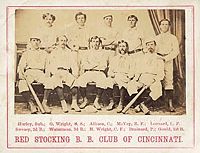 Baseball cards have been around since the very beginning of the sport. Even the very first all-professional baseball team, the 1869 Red Stocking Baseball Club of Cincinnati, had a baseball card. The baseball card for this first all-pro team was created and sold by Peck & Snyder, who sold baseball equipment. Peck & Snyder are believed to be the first mass manufactures of baseball themed trade cards [1]. The earliest cards were produced by businesses hoping to use the growing popularity of the sport to promote their businesses, so most featured an image of the player on the front and advertising on the back. 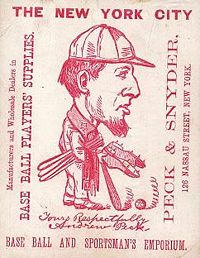 By the early years of the twentieth century baseball cards were being packaged with other products such as tobacco, candy or gum in order to boost sales of those products. Among the companies producing cards were the American Tobacco Company and the American Caramel Company.

In the 1930s the Goudey Gum Company entered the business and produced sets that have become perhaps the best known cards from that era. During World War II, the production of baseball cards virtually stopped because of a paper shortage.

In 1948 the Bowman Gum Company and the Leaf Candy Company resumed production of the cards, beginning the modern era of baseball cards. Leaf discontinued production after one year, but the Topps Gum Company began to produce cards in 1951. Topps' 1952 set, the first large set they produced, has become one of the most sought-after sets among collectors. The Mickey Mantle card from this set is one of the most popular and best-known cards ever produced.

Bowman continued to produce sets through 1955, after which they were bought out by Topps. Once Topps had purchased their main competitor they enjoyed a virtual monopoly in the market that endured for 25 years. They maintained their monopoly by signing most major league players to exclusive licenses. Their primary competitor during this period was the Fleer Corporation, but since Topps had exclusive agreements with most players, Fleer was largely limited to producing cards of retired players. Fleer did succeed in signing Ted Williams to an exclusive contract and the company produced numerous cards depicting Teddy Ballgame both on and off the baseball field.

In 1962, Fleer appealed to the Federal Trade Commission to intervene against Topps for their monopolistic business practices. By this time Topps had become the largest manufacturer of bubble gum in the United States, with $14 million in sales. It took two years for the FTC to decide the case, but on August 7, 1964 Hearing Examiner Herman Tocker ruled against Topps, stating that “due to its exclusive licenses with most of the players, 99% of that entire industry is foreclosed from access to every current baseball subject due to a Topps contract.” Topps appealed the examiner's decision, however, and in 1965 the FTC commissioners overturned the ruling, arguing that Topps and Fleer were in the bubble gum industry, not the baseball card industry; that Topps' monopoly on cards depicting players extended only to cards sold with bubble gum and not to cards sold alone or with non-confectionery products; and that Fleer had other means to compete in the bubble gum industry.

With that, Topps' virtual monopoly on producing cards of major league players continued until 1980, when a Federal judge ruled that the exclusive agreements between Topps and the Major League Baseball Players Association were in restraint of trade. Two other companies, Fleer and Donruss, were subsequently granted licenses to produce cards beginning in 1981.

The judges' ruling opened up a new era in the baseball card industry, with three companies now competing to produce cards that would appeal to consumers. This coincided with the development of a growing market of adult collectors fueled in large part by the maturing of a generation of Baby Boomers who had grown up collecting Topps cards in the 1950s and 1960s. This led to a run-up in prices for older cards, and huge increases in demand for current cards, as both nostalgic collectors and speculators bought up the cards being produced. The companies predictably responded with increases in the number of cards and sets produced. In 1986 another company, Pinnacle, was granted a license and began to produce cards under the Sportflics and Score brands.

In 1989 a new company entered the market, Upper Deck. A sign of the boom in sales, Upper Deck was the first company that entered the sports trading card market as its sole business. Upper Deck revolutionized the card business by printing its cards on high quality card stock and focusing on high production values for its cards, emphasizing clear, high quality photography.

In the 1990s and early 2000s the number of licensees producing cards fluctuated between four and six. Speculators began to lose interest as they realized that values of modern cards would never approach those of post-war era cards, and the market was left to a still significant number of avid collectors. By the mid-2000s so many cards and sets were being produced that the market was oversaturated and some producers began to have financial difficulty. Fleer filed for bankruptcy and eventually had its assets bought out by Upper Deck. In 2005 Major League Baseball and the MLBPA decided that the market needed to be restructured, and limited the number of licensees to two: Topps, who would market cards under the Topps and Bowman brands, and Upper Deck, who would market under the Upper Deck and Fleer brands.

There have always been collectors of baseball cards dating back to the earliest days. Children and youth were avid collectors and traders of the cards during the postwar period, but generally made no effort to keep the cards in good condition, storing them in shoe boxes and sometimes using them as noisemakers in the spokes of their bicycle wheels. It was in the nostalgia-driven boom of the 1980s that a mass market of adult collectors developed, leading to the mature collectibles market for cards that exists today.

There are several cards and sets that are so well-known among collectors that they are almost iconic in nature. The previously mentioned 1952 Topps set (and particularly the 1952 Topps Mickey Mantle card) and the 1989 Upper Deck Ken Griffey, Jr. card being chief among them. The most valuable known baseball card is a 1909 T206 Honus Wagner.

During most of their history, baseball cards were produced as a single, unitary set of cards, with all cards in a given set having the same design. Over the past two decades as competition in the market has increased, manufacturers have introduced a variety of type of cards to attract collectors.

Each set released may feature some or all of the following types of cards:

In addition, cards sometimes have certain characteristics that make them more or less valuable to collectors. The first time a player appears in a major set, the card is considered to be his rookie card, which is usually the most valuable regular-issue card for that player. Some cards may be "short prints" (produced in smaller numbers than other cards in the set), which often makes them more valuable than basic cards. Error cards are those that were printed with some error or misprint on them. These may or may not be more valuable than a regular card, depending on whether (and how soon) the error was corrected and collector interest in the particular mistake. Of course, cards of star players are more valuable than cards of average players. Cards that are not of star or semi-star players and which do not have some other characteristic that sets them apart are called commons. Commons are the lowest-priced cards in a given set, and are of interest mainly to collectors who have a specific interest in that player or are trying to build a complete set.

Comprehensive annual sets primarily feature hundreds of standard player cards that share a design on the front and back. In addition, most of these sets will also feature cards (sometimes grouped together in the checklist, sometimes spread throughout the set) that form their own subset.

The following lists the first card in the first set produced by various companies: