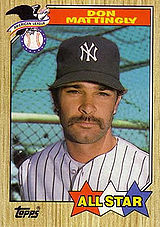 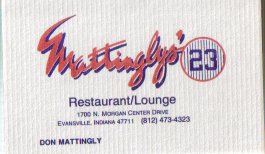 Don Mattingly, now manager of the Miami Marlins, is considered by many to be the greatest New York Yankees player to never appear in the World Series. He played his entire career with the Yankees, making his debut in 1982. In 1984, he led the American League with a .343 batting average, and in 1985, he was the American League Most Valuable Player. Mattingly hit over .300 each season between 1984 and 1989. He was also an excellent defensive first baseman, winning nine Gold Gloves in his career. He was on the Hall of Fame ballot for 15 seasons, starting in 2001, but his support hovered around 15% only. In 2012, it reached a peak of 17.8%, still well below the total that would make him a serious candidate for election, with his time on the ballot running out, but in 2013, it fell to 13.2% and in 2014, it fell further, to 8.2%. In his final year of eligibility via the BBWAA in 2015, he received 9.1% of the vote. He first came into consideration by the Veterans Committee in 2020, as one of ten candidates from the "Modern Baseball" period (1969-1987) but failed to gain election.

Mattingly was originally signed as a 19th round pick in the 1979 amateur draft by the Yankees and scouts Jax Robertson and Gus Poulos. In 1987, Mattingly tied Dale Long's record, set in 1956, hitting a home run in eight consecutive games (Ken Griffey Jr. later also tied this mark in 1993). Mattingly was the only one of the three players with more than 8 home runs during the streak - he had 10. Mattingly also set a record of 6 grand slams in 1987 (the only 6 slams of his entire career), a record which was tied by Travis Hafner of the 2006 Cleveland Indians.

Mattingly's career was cut short by chronic back problems, and he played his final major league game in 1995. Ironically, the Yankees reached the World Series the season before Mattingly's debut (1981) and the season after his final game (1996), but not while he was a member of the team. In fact his only postseason games were the last one of his career, when the Yankees were upset by the Seattle Mariners in the 1995 Division Series, when he went 10 for 24 (.417) with 5 extra-base hits. One can contrast that to Derek Jeter, who came up in 1995, his last season, and played in the postseason practically every year of his long career after he became a regular in 1996. In spite of his lack of postseason play, he was extremely popular in New York, outshining in fans' hearts more heralded teammates like Dave Winfield and Rickey Henderson, who both made it to Cooperstown while he did not. The Yankees also reached the World Series in 2003, the year before Mattingly returned as a coach. After three seasons at the Yankees batting coach, he became the team's bench coach in 2007. After being passed over for the open manager's position in favor of Joe Girardi following Joe Torre's departure, he decided not to return to the team in 2008 and joined the Los Angeles Dodgers, Torre's new team. However, he renounced the position in January, citing family issues that required him to be present at his Indiana home. Mattingly reclaimed the job from Mike Easler at the All-Star break.

Mattingly was involved in an unusual incident on July 20, 2010, in a game featuring three ejections, including that of Torre. Mattingly was acting for his boss as Dodgers manager in the 9th inning, when he called a conference on the mound after closer Jonathan Broxton had loaded the bases against the San Francisco Giants while trying to protect a 5-4 lead. After giving his instructions to his players, he began to walk off the mound when 1B James Loney asked him a question; he returned to the mound to answer him, and rival manager Bruce Bochy argued successfully that this constituted a second visit to the mound, forcing Mattingly to remove Broxton from the game, and replace him with the struggling George Sherrill, who had not warmed up. However, the umpires, led by Adrian Johnson, also erred on the play: Mattingly should have been ejected for delaying the game, and Broxton allowed to finish pitching to batter Andres Torres, during which Sherrill should have begun to warm up. Instead, Sherrill had only eight pitches to get ready, and Torres hit a bases-clearing double for a 7-5 Giants win.

Mattingly was named Torre's successor as Dodgers manager for the 2011 season, after Torre announced his retirement. He did well his first two years, leading his team to winning records both seasons, although expectations were raised significantly prior to the 2013 season when a new ownership group came into place during 2012. That group immediately displayed a willingness to spend a lot of money to put a winner on the field, acquiring pricey veterans Hanley Ramirez, Josh Beckett, Carl Crawford and Adrian Gonzalez in late 2012, and then adding pitchers Zack Greinke and Hyun-Jin Ryu over the off-season, pushing the payroll to a National League-record $217 million. However, in spite of the hype, the Dodgers stumbled out of the gate in 2013, and Mattingly suddenly found himself on the hot seat in May as the expected turnaround did not come. Feeling under pressure, he launched into a tirade against team management prior to a game on May 22nd, complaining that they had built an unbalanced roster that lacked grit and that made it hard for him to meet lofty expectations, a tirade that was poorly received by observers who pointed out that a number of his managerial peers were doing a lot better while having been dealt much less enviable hands. He was rescued from his tenuous position by a tremendous performance by rookie outfielder Yasiel Puig, who was called up to Los Angeles on June 3rd and took Major League Baseball by storm. Riding the rookie's red-hot bat as well of that of Hanley Ramirez and great pitching, the Dodgers began a turnaround, and soon were almost unbeatable, at one point winning 42 out of 50 games to run away with the NL West title. Mattingly's early-season woes were soon forgotten, and while the Dodgers bowed out to the St. Louis Cardinals in the NLCS, his position was now completely secure. On January 7, 2014 he signed a three-year extension to continue as the Dodgers' manager. The Dodgers returned to the postseason the next two seasons, but failed to advance, and on October 22, 2015 it was announced that "Mattingly and the Dodgers have had a mutual parting of the ways", following another quick postseason exit by the team, who were defeated by the New York Mets in the NLDS.

Mattingly did not remain unemployed for long after leaving the Dodgers, as on October 29th, it was announced that he had been hired to manage the Miami Marlins in 2016, succeeding Dan Jennings. He led the team to a second-place finish in 2017, and the team looked quite promising with a slew of good young players, led by an outfield of Giancarlo Stanton, Marcell Ozuna and Christian Yelich. However, owner Jeffrey Loria decided to sell the team after the season, and the new ownership team of Bruce Sherman and Derek Jeter made the controversial decision of immediately undertaking a fire sale, sending off all three outfielders, in addition to a few other solid players. The result was predictable: a terrible season in 2018, accompanied by dreadful attendance numbers at Marlins Park. But Mattingly took it in stride, and if he found the situation frustrating, he did not let it be known. The 2019 season was more of the same, with the Marlins being completely outclassed by their competition, but that September the front office gave him a vote of confidence, extending his contract for two more seasons. On August 6, 2020, he became the winningest manager in Marlins history with his 282nd win, moving past Jack McKeon. It came at a time when the team had been given up for dead before the season, and especially after losing half of its opening day roster to the COVID-19 pandemic, but was confounding everyone by starting the year 6-1. They eventually claimed a postseason slot, where they continued to surprise, sweeping away the Chicago Cubs in two games in the Wild Card Series before finally bowing out to the Atlanta Braves in the Division Series.

Since joining the Marlins, Mattingly has started a tradition of letting one of his veteran players manage the team for the last game of the season. In 2016, it was Martin Prado. A.J. Ellis followed suit in 2017, J.T. Realmuto in 2018 and Miguel Rojas in 2019.

Mattingly appeared in The Simpsons episode "Homer at the Bat". He was inducted into the Indiana Baseball Hall of Fame in 2001. In some sources, including his 1987 Topps baseball card, he is listed as being born in 1962, but he confirmed that his real birth date is 1961, and that the wrong year is the result of a prank he played on some reporters when he was a rookie.