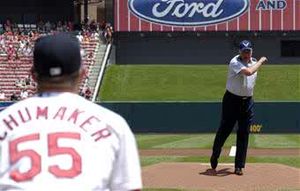 Skip Schumaker was drafted by the St. Louis Cardinals in the 5th round of the 2001 amateur draft. He was signed by scout Steve Gossett and made his pro debut that summer.

He played exclusively in the outfield in his first four major league seasons (2005-2008), then was switched to second base and became the Cards' regular second baseman from 2009 to 2011. In 2008 and 2009, he batted over .300 while playing 153 games each season and scoring 87 and 85 runs. He was usually the team's second-place hitter during those years.

Schumaker was batting for the Cardinals in Game 4 of the 2011 NLDS against the Philadelphia Phillies when a squirrel darted across the field at Busch Stadium and crossed home plate. Cardinal players adopted the "rally squirrel" as their team mascot, and it served them well: not only did they upset the heavily-favored Phillies, but they won their next two series as well, including a dramatic, come-from-behind seven-game win over the Texas Rangers in the 2011 World Series. As a nod to the incident, Topps issued a baseball card in its 2012 set featuring only Schumaker's right leg and the now famous squirrel bounding over the plate.

Skip played one more season with the Cardinals in 2012, splitting time between second base and the outfield; Daniel Descalso and Tyler Greene shared playing time with him at second, but it was Matt Carpenter who truly succeeded him, taking over full-time at the position in 2013 and having an outstanding year. By that point Schumaker had moved to the Los Angeles Dodgers, having been traded for minor leaguer Jake Lemmerman before the 2013 season. He got some playing tiome backing up Mark Ellis at second base and filling in for Matt Kemp in center and Andre Ethier in right field during the year and also pinch-hitting quite a bit, hitting .263 in 125 games. He also started some games in the NLDS as Ethier, now the regular center fielder, was dealing with some injury issues. After the season, he became a free agent and signed a two-year deal with the Cincinnati Reds, with the expectation that he would continue to be a back-up at multiple positions.

Shumaker made three pitching appearances during his major league career, once with the Cards in 2011 when he gave up two runs in an inning, and twice with the Dodgers in 2013, when he kept a clean sheet for two innigs. All three outings came in the final inning of games in which his team was trailing by a large score.

In 2018, he was named first base coach of the San Diego Padres and remained in the position until the end of the 2019 season. After the hiring of Jayce Tinger to replace Andy Green as the Padres' manager, he was given the unprecedented title of "Associate Manager", which was different from the more traditional "bench coach", as Bobby Dickerson was hired to fill the latter position. He was let go at the same time as Tingler at the end of the 2021 season and in 2022 returned to the Cardinals where he was named bench coach under new manager Oliver Marmol.