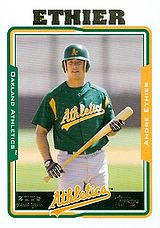 "Everyone thinks they do all these analyses before they make a trade, but, in the end, I'm a Dodger because of that crazy old man. I can't thank him enough." - Andre Ethier, talking about Al LaMacchia

Andre was born in Arizona, attended St. Mary's High School in Phoenix, AZ, and played for Arizona State University. He was selected by the Oakland Athletics in the second round of the 2003 amateur draft. He was signed by scout John Kuehl and made his pro debut that summer. Two years later, he was named Texas League Player of the Year when he hit .319 with 18 homers and 104 runs scored for the Midland RockHounds. At the time, legendary scout Al LaMacchia insisted to the Los Angeles Dodgers that Ethier would become a star. LaMacchia watched Ethier play many games in the minors, and even advised Ethier on hitting. After the season, the Dodgers acquired him from the A's for Milton Bradley and Antonio Perez.

In 2011, Ethier set a record when he extended a hitting streak to 23 games in April on April 26; the longest hitting streak for the month was 22, accomplished by his former manager Joe Torre. He kept on extending the streak, soon making it as the second-longest in Dodger franchise history, only behind Willie Davis's 31 games in 1969. Sitting on 29 games on May 4, he was temporarily stopped by a sore elbow that forced him to sit out a game, but came back on May 6 to get a hit for the 30th straight game. The streak ended the next day, in a 4-2 loss to the New York Mets. After making the All-Star team, he was bothered with a knee injury over the second half of the season and was shut down in early September, with the Dodgers out of contention, in order to undergo surgery. He finished the year batting .292 in 135 games, with 11 home runs - only 2 over the second half - as the injury sapped his power completely.

In June of 2012, the Dodgers signed Ethier to a five-year contract extension worth $85 million.

On March 22, 2014, Ethier was a starter for his 8th consecutive opening day with the Dodgers. The start came as part of the Dodgers' two-game series against the Arizona Diamondbacks in Sydney, Australia, and he had the distinction of driving in the first run of the major league season with a 2nd-inning ground ball that drove in Adrian Gonzalez from third base.

On March 18, 2016, Ethier fouled a ball off his right shin in a Cactus League game. The injury was at first diagnosed as a bad bruise, but a CT scan a few days later revealed a fractured right tibia, putting him out of action for three months.

He retired following the 2017 season, as the the Dodgers bought out the final year of his contract. His final appearance came in Game 7 of the 2017 World Series against the Houston Astros when he drove in a run as a pinch-hitter.