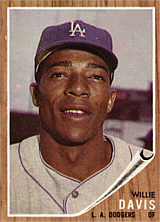 "I used to love to watch Willie run the bases... He took a lot of pride in his baserunning. He was a good man and a good ballplayer. I had a great deal of respect for him." - Manny Mota 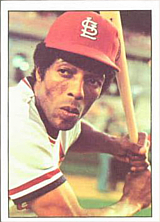 Best known for his speed and defense, centerfielder Willie Davis was a star of the 1960s and 1970s who played eighteen years in the majors, mostly with the Los Angeles Dodgers. A two-time All-Star and three-time Gold Glove winner, he also led the National League in triples twice during his career.

Signed by the Dodgers in 1958, Davis hit .352 with 15 home runs and 16 triples with the Reno Silver Sox in 1959 to win the California League Most Valuable Player award. The following summer, 1960, with the Spokane Indians, he hit .346 with 12 homers, 26 triples, and 30 stolen bases and captured the Pacific Coast League MVP as well as The Sporting News Minor League Player of the Year award. That season, he also played in 22 late-season games with the Dodgers, as a 20 year old, hitting .318.

Davis won the center field job with the Dodgers in 1961 after three players (Don Demeter, Duke Snider, and Tommy Davis) had shared it the previous year, and in 1962, he paced the NL with 10 triples.

While Davis was with the Dodgers, they reached the World Series three times, his bat being the deciding factor in Game 2 of the '63 Series with 2 doubles as he knocked in two runs that beat Al Downing 4-1. In Game 4, his sacrifice fly scored the winning run to complete the series sweep. Overall, Davis managed to hit just .167 and struck out six times in the postseason. Two years later, in 1965, he hit .231 and did not drive in a run but stole 3 bases in one game to tie an all-time World Series record. His team defeated the Minnesota Twins in seven games. He hit only .063 in the 1966 World Series and committed three errors in the fifth inning of Game 2, as the Dodgers went down in defeat to the Baltimore Orioles in four games. In Game 3 of the '66 Fall Classic, Willie made one of the greatest catches in World Series history off a long drive from Boog Powell; he leaped nearly 4 feet in the air and took a home run away from Powell as he had already begun to circle the bases.

Davis remained a solid competitor for Los Angeles for almost the next decade. In 1969, he hit a career-best .311 and fashioned a 31 game hitting streak, the longest in the NL since Tommy Holmes hit in 37 straight games in 1945 and the longest in franchise history, including the team's years in Brooklyn. The next summer, he hit .305 while leading the NL with a career-best 16 triples. In 1971, he hit .309, won the first of three straight Gold Gloves, and was selected to his first All-Star Game. On May 24th, 1973, he recorded six hits in a contest against the New York Mets, and that season, he was an NL All-Star for the second time.

Following the 1973 season, the Dodgers traded Davis to the Montreal Expos for relief pitcher Mike Marshall. He was the Expos Player of the Year in 1974, but was traded after the season when the team went forward with a youth movement. Over the next three seasons, he played for four different teams until he was released by the San Diego Padres in 1977. Not finished yet, he went on to play two years in Japan for the Chunichi Dragons in 1977 (.306, 25 HR) and the Crown Lighter Lions in 1978 (.293, 18 HRs). He came back to the States to play one final season for the California Angels in 1979.

During his career, Davis dabbled as an actor. He was a co-star in the 1970 Jerry Lewis comedy Which Way To The Front? and appeared on several popular programs during his career, among them The Flying Nun, Mr. Ed and Owen Marshall: Counselor At Law. His brief stint as a Texas Ranger, warts and all, features in sportswriter Mike Shropshire's chronicles from covering the team: Seasons In Hell and The Last Real Season.

Davis was found dead by a neighbor on March 9, 2010. He is believed to have passed from natural causes.