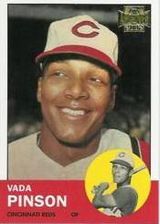 "Vada Pinson caught my eye immediately, because he was just a great ballplayer and it was obvious just from the way he moved." - Darcy Fast in the book The Missing Cub, describing Pinson in the minors

Vada Pinson was a top player of the 1960s who received steady consideration for the Hall of Fame but never got in during his lifetime. His highest total was 15% of the vote. He has the 3rd most career hits of any player not in the Hall of Fame (excluding a few who are still under consideration by the BBWAA, or not eligible for induction). He continues to be eligible for selection by the Veterans Committee.

Although traditionally listed as having been born in 1938, recent research indicates he might have been born in 1936. The original research was done by the staff of "Ballplayers' (1990 biographical volume), and mentioned by others including Bill James (in the 2001 New Historical Baseball Abstract). However, other sources say he was born in 1938, including Pinson himself (see the SABR biography of Vada Pinson).

Pinson was signed by the Cincinnati Redlegs as a free agent in 1956 and came up in 1958 for the first time. In 96 at-bats he hit .271. He went on to play 11 seasons with Cincinnati, usually hitting between .285 and .320 with around 20 home runs. He usually hit ahead of Frank Robinson in the batting order. Pinson's biggest year was 1961, when he hit .343, second in the National League, won a Gold Glove, and was third in the league in the MVP voting.

Pinson lasted longer than Frank Robinson on a Reds team that tended to trade players before they got old. Where Robinson was gone by 1966, Pinson lasted until the end of 1968, when he was traded to the St. Louis Cardinals for Bobby Tolan and Wayne Granger. He did not have a great season with the Cards, who did not perform as well in 1969 as they had in the pennant-winning 1968 season, and Pinson was flipped again to the Cleveland Indians for Jose Cardenal after that year. His first year in Cleveland in 1970 was decent enough (24 home runs and a .286 average), but when he fell off in 1971, he was traded to the California Angels in a deal for Alex Johnson. After a couple of years with the Angels, he finished off his career with the Kansas City Royals, still playing a lot of games on a team that featured a young George Brett. He signed with the Milwaukee Brewers in 1976 but was released after he failed to make the team out of spring training and promptly retired.

Pinson's only World Series appearance came in 1961 with the Reds.

The argument for Pinson as a Hall of Famer rests primarily on his 2,757 career hits. He also had 485 career doubles. He never won an MVP award (finishing in the top 5 only once), and he finished with 1,366 runs scored.

Around the time of his death, there was a concerted effort to get Pinson into the Hall, but the effort failed. Pinson is remembered as one of the top players of the 1960s - a player who came close to achieving Hall of Fame status.

After his playing career ended, Pinson was a longtime big league coach. He was a member of the expansion Seattle Mariners staff from 1977 to 1980 before joining the Chicago White Sox in 1981. In 1982, he rejoined the Mariners and stuck with the club for two seasons. He was a Detroit Tigers coach from 1985 to 1991. Pinson ended his coaching career with another expansion team, the Florida Marlins, in 1993 and 1994. He suffered a stroke in October 1995 and died a few weeks later at the age of 57.

There are two Hall of Famers on the list of the ten most similar players as of December 2007: Roberto Clemente and Zack Wheat.