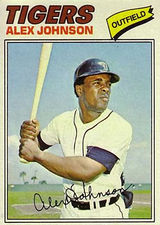 Alex Johnson played thirteen years in the majors and is best remembered for winning the American League batting championship in 1970 with a .329 batting average. He had previously been in the top ten in batting in 1968 and 1969 in the National League. Johnson was a high-profile player who was often the center of controversy.

Johnson was born in Arkansas but grew up in Detroit, MI, being a high school teammate of Willie Horton. He broke in with the Philadelphia Phillies in 1964, a team which also featured Dick Allen in his first full season in the majors. At age 24, he was a backup on the St. Louis Cardinals in 1967, a year when they won the World Series. Johnson did not appear in the Series.

He was known for being surly and difficult to get along with. After his breakout season in 1970, he was involved in a number of incidents in 1971, leading to successive suspensions. His emotional disability was at the center of one of the landmark cases in the early days of the Players' union, as they contested the fines and suspensions as being a reflection of poor management practices, rather then Johnson's fault.

As a player, Johnson was a line drive hitter who hit for average but not much power. He did not draw many walks, and his defense was indifferent or downright poor, turning him into one of the first full-time designated hitters in the majors. He went through his whole career carrying the reputation of being an underachiever, which explains the frequent moves. After his major league days, he played one season for Mexico City.

After baseball, he ran a truck repair and leasing company. His brother Ron Johnson was an NFL running back for the Cleveland Browns (1969) and New York Giants (1970-1975).

He died of complications from cancer in 2015.