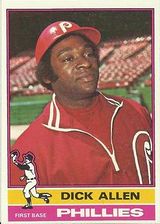 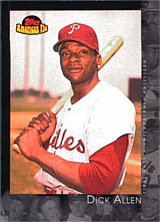 "I scouted 90,000 players in my lifetime and Allen was the greatest I ever saw. It’s too bad he had so many difficulties." - Jack Ogden

Richard Anthony Allen, known first as "Richie" and later as "Dick", was perhaps the single most controversial player of his time. Allen's image was both one of rebellion against a conservative, white power structure, and also one of self-centered pigheadedness. While he was undeniably a truly great hitter, he was also a player whom many baseball executives and managers did not want on their team because of the controversies that continually surrounded him.

At 5 foot, 11 inches, Allen was not a particularly big player. He broke in with the Philadelphia Phillies as "Richie Allen" in 1963. After a successful cup of coffee hitting .292, he became the Phillies' starting third baseman in 1964 at age 22. He was to play third base for four years, and thereafter became primarily a first baseman. He made copious errors at third base, although his range factor was always good.

People didn't pay as much attention to his fielding as to his hitting, though. In 1964 he was named Rookie of the Year, and was also seventh in the MVP voting. The Phillies, who had been rebuilding since a disastrous 1961 season when they lost 107 games, finished in second place in 1964 after a notorious last-week collapse - only one game behind the first-place St. Louis Cardinals, whose third baseman, Ken Boyer, was the MVP that year. In a harbinger of things to come, Allen was third in the league in slugging, first in the league in runs scored and triples, and first in the league in strikeouts as he hit .318 with 201 hits, 29 homers, 125 runs and 91 RBIs. While not known for his triples, Allen finished in the top five in the league in triples each year from 1964 to 1968. He also finished in the top three in strikeouts from 1964 to 1969.

The years from 1964 to 1969 were uniformly excellent for Allen as a hitter. Even as major league baseball entered a "dead ball" era, Allen typically had high batting averages, high on-base percentages, and high slugging averages. He was fourth in the MVP voting in 1966. In 1968, though, the Phillies dipped under .500, and in 1969, they did worse. In 1968, he hit 3 homers on the last day of the season, a neat feat for "The Year of the Pitcher." Only one other player, Gus Zernial, ended his team's season with a three-homer game in the 20th Century. His time was not without controversies, though, as he got in a fight with popular player Frank Thomas in 1965, forcing the Phils to trade Thomas, and later became the focus of critics in part because he was the team's best player and fans tend to blame their team's best player when it fails to win, but mainly because of racism at a time when social tensions were at a boiling point in the United States.

In 1970, at the age of 28, Allen went to the St. Louis Cardinals for a year, where he hit 34 home runs with 101 RBI. He was traded as part of the infamous "Curt Flood trade" after which Flood, who was happy in St. Louis, refused to report to the Phillies in large part because of the poor treatment fans there had given to Allen. The dispute eventually reached the Supreme Court. Meanwhile, Allen went to St. Louis, but the Cardinals, who had finished over .500 the year before, were well under .500 with Allen, and the next year without him they improved to 92 victories. He then spent a year with the Los Angeles Dodgers, in an extreme pitcher's park, hitting 23 home runs with a .395 on-base percentage. The Dodgers, with 22-year-old Steve Garvey at third base and 38-year-old Maury Wills at shortstop, finished second in the division in 1971, one game behind the San Francisco Giants. 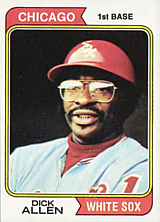 On to the Chicago White Sox in 1972, he was to become intensely controversial as the key player on a team that had not won since 1959 (another key player was Wilbur Wood, who won 20 games each year from 1971 to 1974). Allen won the MVP award in 1972, with 37 home runs and 113 RBI. He hit .316 with 16 home runs in a half-season in 1973, cut short by a hairline fracture in his leg, and .301 with 32 home runs in 128 games in 1974. Although manager Chuck Tanner was given substantial credit for treating Allen with baby gloves, Allen walked out on the team on September 14, 1974, abruptly announcing his retirement. When Allen changed his mind during the off-season and stated he was willing to play again, the White Sox tried to trade him. At that time, somebody asked Joe Burke of the Royals whether he was interested. "I wouldn't pay the waiver price for him, I wouldn't pay a dollar for him. I wouldn't take him if you paid me $10,000." (Bill James in Whatever Happened to the Hall of Fame?) Part of this was based on the fact that Allen showed no interest in taking part in any type of practice, spent most of his free time at the horse racing track, regularly arrived late at the ballpark, and generally seemed to exert a negative influence on young players around him by exerting only minimal effort and not caring much about results (although he was so talented that his numbers were excellent all three years).

The Atlanta Braves acquired Allen's playing rights for the 1975 season, but he announced he would not play for them. The Phillies were interested in his services, however, in spite of his leaving in a cloud of bitterness after the 1969 season, and a March trek by a number of Phillies players to Allen's farm prompted the Braves to claim that Philadelphia was tampering with the temperamental star. It quickly turned out that the Phils were the only team interested in his services, and a deal was worked out with the Braves in May 1975, allowing Allen to resume playing. He was greeted enthusiastically by the team's fans, but did not hit much at first after his long lay-off, hitting only in the .220s by the end of July with limited power, and his defensive play at first base left a lot to be desired. He finished at .233 with 12 homers and 62 RBI, well below his production of the previous few years, but as the team had one of its best seasons in years, he escaped criticism to a large extent.

In 1976, the Phillies reached the postseason for the first time since 1950, winning the NL East crown, but Allen was more a distraction than a contributor. His defensive woes pushed manager Danny Ozark to give Tommy Hutton playing time at first base in April, to which Allen reacted by refusing to enter a game when asked to serve as a pinch-hitter. He split time with Bobby Tolan, but his offensive contribution was not much, and he was dropped to seventh in the lineup. He went AWOL at the end of July, at which point Ozark fined him; he returned and explained he was injured, so the fine was dropped as he went on the disabled list, not returning until the first week of September. During that time, he accused the Phillies of not giving enough playing time to black teammates Tolan and Ollie Brown, and when he returned, he failed to hit much, going through a 3 for 40 streak. When the Phillies clinched the division title, he refused to celebrate with the rest of the team, putting on a private celebration with only a few close friends in a tiny room besides the visiting team's clubhouse at Jarry Park. He then said he would not play in the postseason unless Tony Taylor, who had de facto retired and was serving as a coach, was added to the roster. The rift, which threatened to split the team along racial lines, was resolved when the Phillies officially made Taylor a coach. The Phillies were swept by the Cincinnati Reds in the NLCS, and Allen was not retained for the following season. He concluded his career by playing 54 games for the Oakland Athletics in 1977, during which he hit .240 with 5 homers.

Allen's lifetime stats are not of the sort that would normally get one into the Hall of Fame. In 15 seasons, he had less than 1,100 runs scored and only a bit more than 1,100 RBI. He had under 2,000 hits, and 351 home runs. None of these numbers are typically Hall of Fame numbers. Add in the controversies, and it's easy to understand why he's not in Cooperstown. (He typically got 15-20% of the vote during the years when he was eligible in the baseball writers' voting).

However, during and after his career, there were people who called him the best hitter of his time, and his peak performances are undeniable: seven All-Star Game appearances, six times hitting over .300, twice leading the league in OBP, seven times being in the top three in the league in slugging, twice a home run leader and second in home runs twice, and three times the league leader in Adjusted OPS (OPS+) - as well as three other times in the top three in the league. Bill James, in a revised ranking of first basemen in 2005, ranked Allen as the 15th greatest of all time, behind Jimmie Foxx, Willie McCovey, and others. By the "Black Ink" and "Gray Ink" and "Hall of Fame Monitor" methods, he is clearly of Hall of Fame caliber. And perhaps he will get in. As time goes by, the strength of his peak performances may be easier to recall than the controversies that he engendered. It may also be remembered that his career totals have to be viewed through the prism of a dead-ball era. In the 2015 Hall of Fame Election held by the Veterans Committee, he missed election to Cooperstown by only one vote, receiving 11 of 16 votes when 12 were needed for election. In 2020, his uniform number 15 was belatedly retired by the Phillies.

After his career was over, Allen continued to have troubles in life. He wrote a biography that is considered quite honest about his life and its controversies. He continued to be active in spring training helping young players, and opinions about him had shifted significantly by the time he died in 2020, as the sight of a militant black athlete who did things his way and would not bow down and express the usual platitudes was no longer considered controversial.

He is the brother of Hank Allen and Ron Allen. Hank, who played parts of seven seasons in the majors, was briefly with the White Sox in 1972 and 1973 with Dick, the latter year simply as a way of accruing pensionable time. Ron was briefly with St. Louis in 1972.