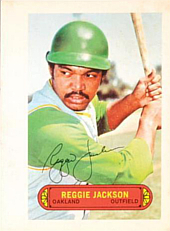 "I couldn't quit, because of all the kids, and the blacks, and the little people pulling for me. I represent both the underdog and the overdog in our society." - Reggie Jackson

Reggie Jackson (born in 1946) was one of the greatest sluggers in baseball history and one of the sport's most colorful personalities. During his 21-year major league career, Jackson played on 11 division winners, 6 pennant-winning teams, and 5 World Series champions. His outspoken style made him one of the best known athletes in sports. Jackson's clutch hitting in the postseason earned him the nickname "Mister October." He cemented his reputation as a clutch hitter in 1977, when in Game 6 of the World Series, he hit three home runs off three different pitchers in the deciding game. Reggie was a superb home run hitter but he also holds the record for most career strikeouts.

Jackson signing with the Yankees.

Jackson was an outfielder and designated hitter in his career. His lifetime regular season batting average was only .262, but he batted .357 in 27 World Series games. In 1977, he became the first player to hit five home runs in one World Series. Jackson led the American League in home runs four times and was the league's Most Valuable Player in 1973. He retired with 563 career home runs, which ranks fourteenth among major league batters. He also set a major league record by striking out 2,597 times. 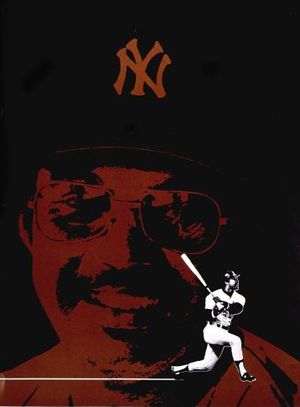 Son of Martinez "Marty" Jackson (1909-1994), who was a bus driver (and has been mistakenly listed as a second baseman) in the Negro Leagues, Reginald Martinez Jackson was born in Abington, Pennsylvania and grew up in nearby Wyncote, which is often listed as his place of birth. He starred at Arizona State University and was drafted by the Kansas City Athletics in 1966. He played for the Athletics in Kansas City and Oakland until 1975, after which he was traded to the Baltimore Orioles. He stormed into the public consciousness in 1969, when he hit 37 homers before the All-Star Game, a record at the time; the total has only been bested once, when Barry Bonds hit 39 in 2001 on his way to a record 73, and is still the American League record, tied in 2013 by Chris Davis. Reggie added to his legend by blasting a tremendous home run in the 1971 All-Star Game, off the light towers on top of the right field grandstand at Tiger Stadium; he was inches away from being the only man to ever hit a ball clear out of that ballpark. He was on three World Series-winning teams with the A's, although he missed the 1972 World Series because of an injury sustained in the last game of the 1972 ALCS.

After playing one season with Baltimore in 1976, Jackson signed as a free agent with the New York Yankees. The Yankees won the 1977 World Series thanks to his dominating performance against the Los Angeles Dodgers that included hitting three homers in Game 6. That made him the most recognizable baseball player in the United States at the time. The 1978 season was controversial, as he clashed repeatedly with manager Billy Martin while the Yankees fell behind the Boston Red Sox in the early going; Martin was fired, and the Yankees turned around to repeat as World Series champions. Jackson had a productive year, although other players such as P Ron Guidry and SS Bucky Dent emerged as the team's heroes. He continued to be at the center of a continuous media storm in his next three seasons in New York, ending his career in pinstripes in the 1981 World Series, which the Yankees lost to the Dodgers. He signed as a free agent with the California Angels in 1982 and returned to Oakland as a free agent in 1987, his final season as a player. In 1987, Reggie tied the record for most consecutive strikeouts by a position player with 9. Through August 2007, others to share the record were Adolfo Phillips (1966), Steve Balboni (1984), Eric Davis (1987), Bo Jackson (1988) and Mark Reynolds (2007). 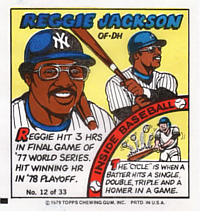 He spent 1990 as a broadcaster for the Angels and 1991 and 1992 with the Athletics. Jackson was elected to the Baseball Hall of Fame on January 5, 1993 by the Baseball Writers Association of America. He is a member of the Athletics Hall of Fame and has a monument in the Yankees Monument Park. Additionally, his #9 (A's) and #44 (Yankees) have been retired.

"I didn't come to New York to be a star, I brought my star with me." - Reggie Jackson

In addition to baseball fame, Reggie has appeared in movies and television shows. He appeared as himself in the movies BASEketball and The Benchwarmers, as well as on "Mr. Belvedere," "The Love Boat," "Blossom," "MacGyver," "Malcolm in the Middle," and "Suddenly Susan." He also had roles in which he did not play himself in The Naked Gun, Richie Rich, and one episode of "Diff'rent Strokes."

"I'm the straw that stirs the drink" - Reggie Jackson