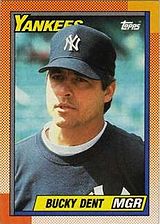 Slick-fielding shortstop Bucky Dent played a dozen years in the majors and is best remembered for his heroics in leading the 1978 New York Yankees to a World Series title.

Dent was selected by the Chicago White Sox, out of Miami-Dade Junior College, in the 1970 amateur draft. He played three years in the minors before being called up by the Sox midway through the 1973 campaign. In 1974 he became the Sox starter at short, hitting .274 and finishing second in American League Rookie of the Year voting to Mike Hargrove. After leading AL shortstops in fielding in 1975 and starting in the All-Star Game, his batting average declined in 1976 while he threatened to leave the club via free agency when his contract was up. The Sox responded by trading him to the New York Yankees for Oscar Gamble, LaMarr Hoyt, and Bob Polinsky prior to the start of the 1977 campaign.

With the Yankees, Dent joined Willie Randolph to form a smooth-fielding double play tandem for the next five and a half seasons. After winning the 1977 World Series, he played a key role for the Yankees in a one-game playoff versus the Boston Red Sox on October 2, 1978. With the Yankees down 2-0 in the seventh inning, he hit a three-run home run off Mike Torrez that gave his club the lead, and the Yankees went on to win the game, 5-4. He was also the Most Valuable Player in the World Series, hitting .417 with 7 RBI in a six-game Yankee triumph over the Los Angeles Dodgers.

Dent was an All-Star for the Yankees in 1980 and 1981 but struggled at the plate in 1982, hitting just .169 before being traded to the Texas Rangers for Lee Mazzilli in August. He led AL shortstops in fielding again in 1983 but ended his big league career after appearing in a handful of games for the Kansas City Royals in 1984.

After his playing days, Dent managed in the Yankees organization for several years before replacing Dallas Green as the Yankees skipper late in the 1989 season. The team lost 11 of his first 13 games at the helm but bounced back to win the next 9, and he held onto the job for 1990. After an 18-31 start, he was fired in June and replaced by Stump Merrill.

Dent was then a St. Louis Cardinals coach from 1991 to 1994 and a member of the Rangers coaching staff from 1995 to 2001. In 2006, he joined the Cincinnati Reds staff as bench coach for his former Yankee teammate, Jerry Narron. He left the Reds on July 3, 2007, two days after Narron was fired, with the team in last place in the NL Central.