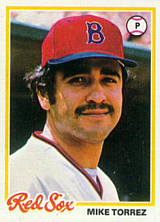 Mike Torrez was a very good starting pitcher throughout the 1970s who was a key member of the New York Yankees pitching staff when they won the World Series in 1977. However, he is best remembered for two unfortunate incidents: giving up a three-run home run to light-hitting Bucky Dent in the one-game playoff between the Boston Red Sox and the Yankees at the end of the 1978 season, and throwing the pitch that almost ended Dickie Thon's career in 1984.

Torrez was signed by the St. Louis Cardinals for a $20,000 bonus after graduating from Topeka High School in 1964. He had a difficult first season in professional ball in 1965, going 4-8, 4.79 for the Raleigh Cardinals of the Carolina League. He did a lot better in 1966, even though he still had a losing record at 10-13: between the Rock Hill Cardinals of the Class-A Western Carolinas League and the Arkansas Travelers of the AA Texas League, he posted an ERA of 2.56 in 169 innings. That brought him to the AAA Tulsa Oilers in 1967, where he went 10-10, 3.32 and earned a first call-up to the big leagues at the end of the year, pitching three games with an 0-1 record for the eventual World Champions. He already displayed the profile he would have in the majors at that early juncture: lots of innings pitched (190), a decent ERA, and lots of walks (108). Torrez was in fact a classic "nibbler", a pitcher whose stuff was not outstanding but who would constantly aim for the corners of the strike zone, keeping hitters off stride but walking many batters in the process. In 1968, Torrez again split his time between Tulsa and the majors, going a solid 8-2, 3.24 in AAA and showing good promise with a 2.84 ERA in 19 innings in the majors. The Cardinals returned to the World Series that year, but Torrez did not pitch in the postseason.

With the expansion of 1969 creating a slew of new major league jobs, Mike Torrez earned a spot on the Cardinals' pitching staff in 1969. Working as a swingman, he posted a record of 10-4, 3.58 in 24 games (15 starts), pitching 108 innings with 62 walks and 61 strikeouts. He was a full-time starter in 1970 after an outstanding performance early in the year against the Montreal Expos: on April 15th, he threw a complete game one-hitter to blank the Expos 10-0. However, he slowed down afterwards and ended the season 8-10, 4.22, walking 103 batters and striking out 100 in 179 innings. He started the 1971 season in St. Louis, but his troubles deepened, as his ERA ballooned to 6.00, he walked 30 batters while only striking out 8 in 36 innings, and he lost his spot in the starting rotation. At the trading deadline on June 15, the Cardinals sent him to the Expos in return for hard-throwing prospect Bob Reynolds.

Torrez' first months in the Montreal Expos organization were with the AAA Winnipeg Whips, where he still struggled with his control (his K/BB ratio was 45/52 in 75 innings) and his ERA was an ungodly 8.16. He still earned a September call-up and pitched well in his one outing, giving up no runs in four innings of relief. He then made a tremendous comeback and enjoyed an outstanding season with the Expos in 1972. His ERA was 1.61 after the first 15 games. His fastball moved in all directions and his curveball was at its best. He wound up with a 16-12 record for the season, pitching 243 innings to a 3.33 ERA. Alongside Bill Stoneman and rookie Balor Moore, he made up a formidable starting threesome for the Expos, but the team's offense was very weak, leading to a 70-86 record. In 1973, the Expos improved, flirting with first place until the last days of September, but Torrez, Stoneman and Moore all slumped significantly: Torrez was the loser on Opening Day, struggling to a 9-12 record with a 4.46 ERA and 115 walks against 90 Ks. Then again, Stoneman went 4-8, 6.77 and Moore 7-16, 4.50, as starting pitching proved to be the team's Achilles' heel. Torrez turned things around again in 1974, tying young Steve Rogers for the team lead with 15 wins (he lost only 8, while Rogers lost a team-record 22), with a solid 3.58 ERA, and a rare positive - but just barely - K/BB ratio (92/84).

Torrez married a Montreal girl, Danielle Gagnon, in 1974, and was hoping to settle in Quebec for a while, but it was not to be. The Expos were desperate for a left-handed starter and manager Gene Mauch was tired of Torrez' profligacy with bases on balls. On December 4, General Manager Jim Fanning made one of the most lopsided trades in baseball history, sending Torrez and young switch-hitting outfielder Ken Singleton to the Baltimore Orioles in return for veteran lefty pitcher Dave McNally, outfielder Rich Coggins and minor league pitcher Bill Kirkpatrick. McNally retired from baseball by the end of May, Coggins was felled by illness and released in June, while Kirkpatrick never pitched in the majors. Both players who went to the Orioles became stars. Torrez won 20 games for the only time of his career in 1975, going 20-9, 3.06 in 270 innings on the mound. That year, he became the last pitcher to win 20 games while walking more batters than he struck out (a league-leading 133 walks to 119 strikeouts). After the season, Torrez was involved in one of the biggest blockbuster trades of the 1970s, as Baltimore sent him, outfielder Don Baylor and pitcher Paul Mitchell to the Oakland A's in return for slugger Reggie Jackson, left-handed starter Ken Holtzman and a minor leaguer.

Mike had another solid year for Oakland in 1976, posting a 16-12 record with an outstanding 2.50 ERA as the A's fell just shy of the Kansas City Royals in their quest for a sixth consecutive AL West division title. He had one of the best K/BB records of his career that season at 115/87 and pitched 13 complete games and 4 shutouts. He formed a very good starting duo with Vida Blue (18-13), but the rest of the A's starting rotation was mediocre, with only Stan Bahnsen posting an ERA under 4.00 among the six other men who started at least a game that season. At the end of the year, the formerly great team was torn apart by free agency, with Baylor, 3B Sal Bando, SS Bert Campaneris, RP Rollie Fingers, C Gene Tenace and OF Joe Rudi all departing for greener pastures. With DH Billy Williams retiring, P Mitchell and Glenn Abbott lost to the expansion draft, and OF Claudell Washington traded in spring training, Blue and Torrez were surrounded by a cast of youngsters and cast-offs. Still, Torrez started the 1977 season by winning three of his first four starts. On April 27th, with free agency looming at the end of the year, owner Charles Finley sent him packing as well, trading him to the New York Yankees for veteran pitcher Dock Ellis, light-hitting shortstop Marty Perez and outfield prospect Larry Murray. Torrez joined his fourth team in four years, but he finally gained a measure of national fame even though he had been excellent since his final season in Montreal. For the Yankees, he went 14-12 in 31 starts, giving him 17 wins on the year, with a combined ERA of 3.88. He completed 15 games and formed a solid starting rotation with Catfish Hunter, Ed Figueroa, Don Gullett and Ron Guidry. He lost Game 3 of the 1977 ALCS against the Kansas City Royals, but made a clutch relief appearance in the deciding Game 5, taking over for Guidry with the Yankees trailing in the 3rd inning and pitching 5 ⅓ innings of solid relief before handing the game over to Sparky Lyle, who picked up the win when the Yanks rallied for three runs in the top of the 9th. He was outstanding in the World Series, pitching a 5-3 complete game win over the Los Angeles Dodgers in Game 3 when the Yankees had been trailing two games to none, then posting another complete game win in the clinching Game 6, this time an 8-4 win marked by Reggie Jackson’s three home runs.

Torrez was now a national celebrity who appeared in soft drink commercials. A free agent after the season, he cashed in on his success of the previous four years by signing with the Boston Red Sox. In 1978, he was the team’s second starter behind Dennis Eckersley, ahead of aging veterans Luis Tiant and Bill Lee. The story of that team has become legendary: the Sox got out to a huge lead in the AL East race as the Yankees were wracked by dissension, with manager Billy Martin being fired with the team in 3rd place. The Yankees gradually made up the distance, eventually passing the Red Sox after the infamous "Boston Massacre" in September. After losing 17½ games in the standings, the Sox were 3½ games down with 14 games to play but managed to force a tie with both teams finishing the regular season with records of 99-63 and needing to face off in a one-game playoff at Fenway Park on the afternoon of October 2. Torrez, who had won 16 games, started for Boston against the all-world Guidry (who would end the season with a record of 25-3, 1.74). With Boston leading 2-0 in the 7th, Torrez faced light-hitting shortstop Bucky Dent a .243 hitter who had hit four home runs up to that point, with two on and two out; Dent lifted a fly ball over the Green Monster in left field to give the Yankees the lead they never relinquished, and Torrez ended the year 16-13, 3.96.

The remainder of Torrez’ career was anticlimactic. He pitched four more seasons with Boston, but was never more than middling: 16-13, 4.49 in 1979, when he again led the American League in bases on balls allowed, then seasons of 9-16, 10-3 and 9-9 as the team was never really in contention. In January of 1983, he was traded to the New York Mets for a minor league outfielder. He started 34 games for the Mets in 1983, but went 10-17, 4.37 for a wretched team; he ended up leading the National League in three unenviable categories: losses, earned runs and bases on balls. Still, he was an innings eater, and after the Mets lost Tom Seaver to the Chicago White Sox in the Free agent compensation draft, they had a need for that skill in 1984. In his second start of the season on April 8, he beaned the young All-Star shortstop of the Houston Astros, Dickie Thon, with a fastball, fracturing his orbital bone and almost ending his career. He was used intermittently after that accident and pitched poorly, earning his unconditional release on June 22 with his record at 1-5, 5.02, in 9 games. He signed with the Athletics but was rocked in two relief outings, giving up 7 runs in 2⅓ innings. He also made three poor starts with the AAA Tacoma Tigers before being released again on August 9. Torrez tried a comeback with the unaffiliated Miami Marlins of the Class-A Florida State League in 1985; he went 7-8, 2.80 in 19 starts, but did not tempt another major league team to give him a last chance to pitch.

Overall, Mike Torrez went 185-160 with a 3.96 ERA in 494 games (458 of them starts) over 18 seasons. He was never an All-Star, but from 1974 to 1979, he was a top-notch starter, and had a few other good seasons. His style of pitching is almost extinct today, but in the 1970s, when home runs were rarer and batters were less patient, his strategy of never giving opposing batters a good pitch to hit was quite successful, if sometimes trying, for his managers.

In 2011, Torrez was named General Manager of the Newark Bears as they prepared for their first season in the Canadian-American Association.