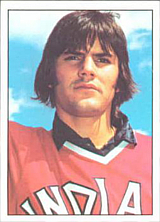 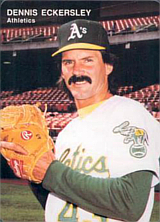 "I had a good run. I had some magic that was with me for a long time, so I know that I was real lucky to not have my arm fall off for one thing, and to make it this long physically is tough enough. But to me it's like you're being rescued too when your career's over. It's like, 'Whew, the pressure's off.'" - Dennis Eckersley

Dennis Eckersley is one of only a few pitchers to excel as both a starter and a closer. His 390 saves rank 7th all-time, while his 197 victories put him in a tie for 121st with fellow Hall of Famer Dazzy Vance, among others.

Eck made his major league debut with the Cleveland Indians in 1975. On May 30, 1977, he pitched a no-hitter against the California Angels. After three solid seasons with the Tribe, he was traded to the Boston Red Sox in 1978. That year, he won 20 games and was the team's ace, although the task of pitching the decisive one-game playoff against the New York Yankees on October 2nd fell to his teammate Mike Torrez, since Eckersley had earned a key win in a start 48 hours earlier. He remained a mainstay in the Boston rotation until 1984, getting the start in the 1982 All-Star Game, when he was traded to the Chicago Cubs for Bill Buckner. He won 10 games for the Cubs in 1984 and helped them win their division. He remained in the Cubs' rotation for the next two seasons, and was traded to the Oakland Athletics for three minor leaguers just before the start of the 1987 season.

Oakland manager Tony LaRussa decided to convert Eckersley into a reliever, and he went on to become one of the most dominating firemen in baseball for the next decade. He notched over 30 saves every year from 1988 to 1993, and Oakland reached the World Series in 1988, 1989, and 1990. In the 1988 ALCS, he saved all four games as the A's swept his former team, the Red Sox. Yet the most remembered moment of Eckersley's career in those years was when he gave up a game-winning home run to a hobbled Kirk Gibson in Game 1 of the 1988 World Series. In 1990, he had a minuscule 0.61 ERA; that ERA was a record for a pitcher with 50 or more innings until Fernando Rodney put up an ERA of 0.60 in 2012. Eckersley also became the first pitcher since at least 1900 to begin a season with 30 strikeouts and no walks; that mark held for 23 years until Adam Wainwright topped it. In 1992, he recorded 51 saves and won the American League Cy Young Award. Eckersley also was named MVP; it would be 19 years until another pitcher, Justin Verlander, won an MVP Award in the majors.

Before the 1996 season, he was traded to the St. Louis Cardinals. He returned to the Boston Red Sox to finish his career in 1998.

Eckersley saved 57 Bob Welch wins in his career, a record for a pitcher combination until Mariano Rivera and Andy Pettitte broke it in 2009. He is also the only pitcher in baseball history to have both made 1000 pitching appearances and thrown 100 complete games (a number that Eckersley reached exactly). Normally, the two accomplishments are mutually exclusive, as one needs to be a full-time reliever to achive the first milestone, and a full-time starter to have a shot at the second. This shows how exceptional a career Eckersley had. A few players have reached 100 games played and 100 complete games, but these were largely pitchers turned position players (Babe Ruth is of course the most famous of these) and Jim Kaat, who reached the 1,000 games played mark thanks to appearances as a pinch-hitter and pinch-runner.

Eck coined the term "walk-off home run", using it in a postgame interview after Kirk Gibson took him deep in the '88 World Series.

During his playing career, Dennis struggled with sobriety, eventually establishing himself sober in January 1987 before he took the world by storm with the Athletics. At one time, he and Indian teammate Rick Manning were very close friends until Eck's first wife left him for Manning. This affair is believed to have been the impetus for his deal to Boston for the 1978 tilt.

Eckersley was elected to the Baseball Hall of Fame on January 6, 2004 by the Baseball Writers Association of America. He is a member of the Red Sox and Athletics team Hall of Fames and had his #43 retired by Oakland in 2005.

He is currently a post-game TV broadcaster for the Red Sox on NESN. An MLB Network special about his life, "Eck: A Story Of Saving", premiered in December 2018.