Dazzy Vance did not win his first major league game until his early thirties but proved to be the ultimate late-bloomer. He dominated National League hitters with a live fastball, leading the National League in strikeouts seven straight seasons. He continued to pitch at a high level well into his forties, and gained admittance to the Hall of Fame in 1955. 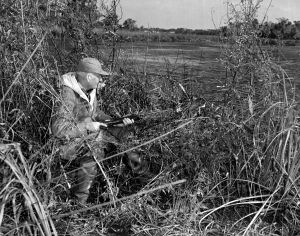 Vance duck hunting in Florida in 1952

He was an almost exact contemporary of Babe Ruth, although Vance pitched mostly in the National League while Ruth was almost always in the American League. Vance was briefly with the New York Yankees in 1918, a couple of years before Ruth got there.

He is the only major leaguer remembered as "Dazzy", although Monty Swartz, who pitched one game in the majors before Vance was a star, was also nicknamed Dazzy.

Vance pitched from 1912-1921 in the minors, winning 133 games. Although he was in the majors briefly in 1915 and 1918, he didn't become a regular until 1922, the year after he had won 21 games with the New Orleans Pelicans. On July 20, 1925, he struck out 17 batters in a game against the St. Louis Cardinals; it would remain the highest total by one pitcher against the Cardinals until Corey Kluber had 18 strikeouts against the Redbirds in 2015.

In 1914 Patsy O'Rourke was quoted as saying that Vance, at the time a youngster, was going to become another Pete Alexander.

Following his playing days, Vance settled on the Gulf Coast of Florida, where he helped to develop the tourist trade at Homosassa Springs, where he died in 1961.