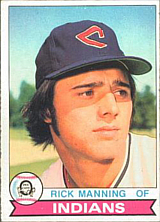 It was the romantic entanglement of Rick Manning and the (then) first wife of Dennis Eckersley that led to Eck's departure from the Cleveland Indians on the eve of the 1978 season. Ironically, Manning would go on to win the BBWAA Good Guy Award in 1980. Manning caught the final out of Len Barker's perfect game in 1981, a fly ball off the bat of Ernie Whitt of the Toronto Blue Jays.

After several solid seasons, Manning was traded in 1983 by the Indians to the Milwaukee Brewers for Gorman Thomas, a crowd favorite and a former home run champion. The trade was not well-received in Milwaukee, even though Manning was a good defensive outfielder who had speed and was able to hit line drives to all corners of the ballpark. He finished his career in Milwaukee, playing until the end of the 1987 season.

In 1989, he played for the Fort Myers Sun Sox of the Senior Professional Baseball Association. He hit .288 with 33 RBI in 51 games for the club.

Since 1990, he has been a broadcaster for the Cleveland Indians. His tenure covering the team is the longest in franchise history.