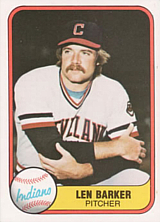 Len Barker played more than a decade in the majors, most notably with the Cleveland Indians in the early 1980s. For his career, he was a sub-.500 pitcher, but for one day in 1981, he was as good as it gets, hurling a perfect game.

Barker was drafted by the Texas Rangers in the third round of the 1973 amateur draft and reached the majors in 1976. After three years with the club, primarily pitching out of the bullpen, he was traded to the Indians. In 1980, he won 19 games and led the American League with 187 strikeouts. On May 15, 1981, he struck out eleven and threw a perfect game against the Toronto Blue Jays. He started that year's All-Star Game but then struggled with arm injuries in the season's second half, going 3-4 with a 6.00 ERA.

After bouncing back and winning 15 games in 1982, Barker posted a 5.11 ERA in 24 starts for the Indians the next year before being traded to the Atlanta Braves late in the season in what became a totally lopsided trade. The Indians acquired Rick Behenna and future stars Brett Butler and Brook Jacoby plus cash for Barker. In two and a half years with Atlanta, he won only 10 games and spent considerable time on the disabled list. He briefly returned to the majors in 1987 with the Milwaukee Brewers, winning just 2 games in 11 starts.