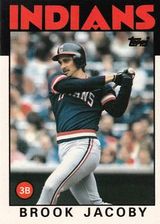 Brook Jacoby was named to "The Top 100 Greatest Indians Roster", as created by the Cleveland Indians in 2001. He played 8 seasons with the Indians after being acquired from the Atlanta Braves late in 1983 as part of a trade for Len Barker. He was the team's starting third baseman from 1984 to 1991 when he was traded in mid-season to the Oakland Athletics. After a half season with Oakland, he returned to Cleveland for one final year in 1992. During that time he would consistently hit around 25 doubles per season, with a batting average around .270, but his home run total fluctuated from 9 to 32, then dropped to just 4 in each of his final two years. He had seasons of 87, 80 and 75 RBIs and was a solid defender, earning a couple of trips to the All-Star Game as a result.

Jacoby was a roving hitting instructor for the Cincinnati Reds in 2000 and hitting coach for the Louisville Bats in 2001-2002. He was hitting coach of the AZL Rangers in 2003-2004, and the Texas Rangers' minor league hitting coordinator in 2005-2006. He spent part of the 2006 season as hitting coach for the Texas Rangers while Rudy Jaramillo was ill and was named hitting coach of the Cincinnati Reds in 2007 where he remained through 2013. He was the minor league hitting coordinator for the Rangers in 2014. In 2015, he became hitting coach of the Toronto Blue Jays [1]. That year, he received a rare fourteen-game suspension as a result of pinning umpire Doug Eddings against a wall in a dugout tunnel following a game on April 29th; Jacoby appealed the suspension, claiming the facts were not those reported by the umpire and that the penalty was "very biased, harsh, and unfair", but it was upheld by Major League Baseball. He was let go following the 2018 season.

His father, Brook Jacoby Sr., was a minor league pitcher in 1956-1958. His son, Torrey Jacoby, was drafted by the Arizona Diamondbacks in the 40th round of the 2007 amateur draft.