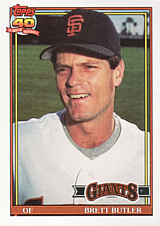 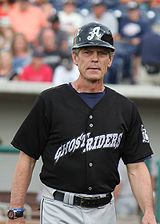 Speedy outfielder Brett Butler was a premier leadoff hitter of the 1980s and 1990s. He had enough power to lead his league in triples four times during his career and was routinely among his league's top ten in on-base percentage and stolen bases.

Born in Los Angeles, Butler grew up in the San Francisco area until he was 12. He then moved to the Chicago area and, after attending Libertyville High School, went to Southeastern Oklahoma State University. He was chosen by the Atlanta Braves in the 23rd round of the 1979 amateur draft. He was not even the first outfielder from his team drafted; Billy Bowen went in the 21st round.

Butler hit .335 with 44 stolen bases for the Richmond Braves in 1981 en route to being named the International League Most Valuable Player. He made his big league debut late that summer and was Atlanta's Opening Day starter in center and leadoff hitter the next April. He struggled as a regular, hitting just .217, and went back to Richmond, where he hit .363. He was back with the Braves late in the season and appeared in two games of the 1982 NLCS. He was again an Opening Day starter in 1983, and this time, he stuck in the majors, leading the National League with 13 triples that summer. Following the 1983 season, Butler, Rick Behenna and Brook Jacoby were sent to the Cleveland Indians as players to be named later in a high profile trade that had brought fireballer Len Barker to Atlanta. After stealing a career-best 52 bases and scoring 108 runs in 1984, he hit .311 and scored 106 times in 1985. He again led the American League in triples in 1986 with 14. While Butler and Jacoby were blossoming, Barker was thoroughly cooked, making his final appearance with the Milwaukee Brewers in 1987.

Brett became a free agent following the 1987 season and signed with the San Francisco Giants. He led the National League with 109 runs scored in his first year with the club and scored 100 times in 1989 as the Giants went on to reach the World Series, falling to the Oakland Athletics in the bay area showdown. In 1990, he led the NL with 192 hits, scoring 108 runs and batting .309. After the season, Butler signed with the Los Angeles Dodgers. In his first season for the Dodgers, he led the NL with 112 runs scored and 108 walks, batting .296 with a .401 OBP and earning his first and only trip to the All-Star team. Additionally, he did not commit an error in a league leading 161 games in center field. He contributed three more solid seasons with L.A., including a career best .311/.411/.446 slash lin with an NL best 9 triples in the strike-shortened 1994.

Brett signed with the New York Mets in 1995 but was dealt back to the Dodgers for a few minor leaguers late that season. He missed most of the 1996 season while fighting cancer before making a courageous comeback on September 6th. He came back at 40 in 1997 to play regularly, hitting .283 with a solid .363 on-base percentage. His power was completely shot (.324 slugging percentage) and he was only 15 for 25 in stolen base attempts. Brett retired after the season.

Overall, Butler hit .290 over 17 seasons, scoring 1,359 runs and stealing 558 bases. He finished his career with a 68% success rate swiping bags, compared to Tim Raines's 85% and Rickey Henderson's 81%. Brett was a solid center fielder and an excellent bunter. Although a contemporary of Rickey Henderson and Tim Raines, the two are not on the similarity scores list of the most similar players. Instead, the most similar contemporary player was Willie Wilson, who led the league in triples five times, led the league in runs scored once and in stolen bases once. The most similar player, at a score of 911, is Hall of Famer Richie Ashburn.

Following his playing days, Butler was the Dodgers' minor league outfield instructor in 2002 and the Mets' minor league bunting, baserunning, and leadoff instructor in 2003. He managed the 2004 GCL Mets and was an Arizona Diamondbacks first base coach in 2005. Butler managed the Lancaster JetHawks in 2006. He was manager of the Mobile BayBears in 2007, when he suffered a stroke on July 26, and was replaced by his former teammate with the Giants, Matt Williams, for the remainder of the season. Butler served as Arizona's minor league outfield and base running coordinator in 2008 and was named manager of the Reno Aces in 2009. After five seasons in the role, he moved to the Miami Marlins in 2014 to serve as the team's third base coach. On May 26, 2015, at the urging of new manager Dan Jennings, he switched jobs with assistant hitting coach Lenny Harris. After the switch he served as the team's outfield, baserunning, and bunting instructor. He was let go after the season.