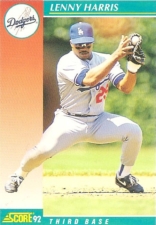 Lenny Harris was signed as a 5th round pick in the 1983 amateur draft by the Cincinnati Reds and scout George Zuraw.

Harris played eighteen years in the National League. He was an unusually versatile player, with 485 games at third base, 300 at second base, 161 in right field, 157 in left field, 87 at first base, 52 at shortstop, 12 at DH, 3 in center field, one scoreless inning as a pitcher and many games as a pinch-hitter. He set a number of records in that latter role, and was one of the last players, along with Matt Stairs, to be kept on a major league roster as a full-time pinch-hitter.

His first ten and a half seasons were with only two teams, the Cincinnati Reds and the Los Angeles Dodgers, while his last seven and a half years were with six other teams, spending most of that time with the New York Mets and Florida Marlins.

The similarity scores method shows the most similar player (as of 2014) to be Rick Miller - a very different player, as Miller was a centerfielder known for his defense who was a regular for a number of years; Miguel Cairo, who is second on the list, is a much better comparison.

He became the Washington Nationals hitting coach during the 2007 season and continued in the role in 2008. Joining the Los Angeles Dodgers organization, he was the Camelback Ranch Senior Hitting Coach in 2009-2010 and the hitting coach for the Great Lakes Loons in 2011. Harris was a coach for the GCL Marlins in 2013-2014. In 2015, he joined the big league Marlins' coaching staff as assistant hitting coach, but on May 26th, new manager Dan Jennings had him switch roles with third base coach Brett Butler. Harris was bench coach of the Daytona Tortugas in 2019.

At age 45, Harris had a major heart attack while pitching batting practice to Matt Wallach. He has since recovered. Source: Times article