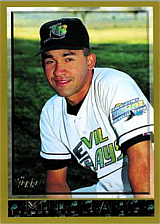 "[A] very good defensive player, he can run, and he's going to come along as a hitter...he was one of the most talented players we had on the board." - Larry Rothschild

Miguel Cairo was a well-traveled utility man, playing with nine teams (and in ten organizations) during a productive 17-season career.

Originally property of the Los Angeles Dodgers, Miguel reached the majors with cups of coffee for the Toronto Blue Jays and Chicago Cubs in 1996 and 1997 respectively. While with the Cubs' Triple A outfit the Iowa Cubs, he stole 40 bases (second best in the level) and smoked 35 doubles (tops in the Cub organization). His reward was to be left unprotected in the ensuing expansion draft, joining the Tampa Bay Devil Rays for their maiden voyage in 1998. In his lone full-time starting season, playing second base, he hit .268 with 26 doubles and stole 19 bags, being named to the 1998 Topps All-Star Rookie Team.

Following two more seasons of fairly frequent play for the Devil Rays in 1999 and 2000, he began traveling around baseball in a utility role, with stops back with the Cubs, the St. Louis Cardinals, the New York Yankees (with a productive .292/.346/.417 line as a semi-regular second baseman in 2004), the New York Mets, the Seattle Mariners, the Philadelphia Phillies, settling down with a final three-season run with the Cincinnati Reds from 2010 to 2012. In 1,490 games, he recorded 1,044 hits and hit .264. Among his appearances were 313 games as a pinch-hitter and another 65 as a pinch-runner, in addition to playing seven positions and being a DH.

Upon his retirement following the 2012 season, Miguel was named a special assistant to Reds General Manager Walt Jocketty. He was also invited to the Reds' spring training in 2013 as an instructor for both major leaguers and minor leaguers. He later worked with the New York Yankees in Player Development and as an occasional minor league instructor. In 2021, he was named bench coach of the Chicago White Sox, working with manager Tony LaRussa.

Miguel's son, shortstop Christian Cairo, was drafted in the 4th round by the Cleveland Indians in 2019.