Note: This is the page for the major league player and manager Dave Martinez. For others with the same or similar names click here. 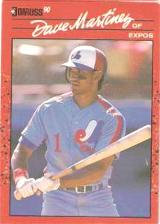 Dave Martinez was signed after being selected in the secondary phase of the January 1983 amateur draft by the Chicago Cubs and scout Jim Zerilla. He first reached the major leagues with the Cubs in 1986. he had a very good season for them in 1987, when he hit .292/.372/.418 in 142 games as the team's starting centerfielder. However, he slumped during the first half of the 1988 season and on July 14th was traded to the Montreal Expos in return for Mitch Webster. He never became a star player, because he lacked power and his batting averages were not quite high enough to compensate, but he developed into a very useful fourth outfielder with the Expos from 1989-1991, getting 360-400 at-bats each year while playing all three outfield spots. However, the Expos came up with three excellent young outfielders during the period, in Moises Alou, Marquis Grissom and Larry Walker, and with Otis Nixon also around and a number of youngsters in the minors, he became supernumerary. Before the 1992 season, he was traded to the Cincinnati Reds in a trade that brought closer John Wetteland to Montreal.

He moved around a lot in the second half of his career, and while never a starter at a single spot, he was a quasi-regular for the Chicago White Sox from 1995 to 1997, even though he did not have a fixed position. He hit .307, .318 and .286 those three years, scoring 85 runs the second year and hitting a career-high 12 homers the next. He was an original member of the Tampa Bay Devil Rays, being signed as a free agent by the expansion team before its inaugural 1998 season. He played mainly right field for them in their first two seasons, getting the most at-bats of his career in 1999 when he hit .284 in 514 at-bats.

During the 2000 season, he was traded three times in two and a half months:

Remarking on this whirlwind of moves, he was quoted as saying: "At least teams want me." Despite all the moving around, he played 114 games that season, hitting his customary .285. He finished his playing career with a final season with the Atlanta Braves in 2001, where he hit .287 in 120 games. He finally got to play in the postseason that year, going 1 for 6 in two series as the Braves were eliminated by the Arizona Diamondbacks in the NLCS.

During his career, Martinez was twice used as a pitcher in blowout games, by the Expos in 1990, when he gave up 2 hits and 2 walks in a third of an inning and had to give way to Junior Noboa, another position player, to finish the inning, and in 1995 with the White Sox, when he gave up a couple of walks but no runs in one inning of work.

After retiring as a player, Martinez became a coach, joining the Devil Rays as first base coach for Joe Maddon in 2007, and then moving to bench coach in 2008, the year the now re-named Rays reached the World Series. He stayed in the position until the end of the 2014 season, when Maddon left to manage the Chicago Cubs. Martinez was considered as a potential successor to Maddon in Tampa Bay, but instead moved to Chicago where he became the Cubs' bench coach in 2015. He was thus part of the Cubs' historic win in the 2016 World Series, which ended a title drought of 108 years. After the 2017 season, he was hired by the Washington Nationals to succeed Dusty Baker as their manager starting in 2018.

His first season did not go as expected however, as the heavily-favored Nationals found themselves quickly trailing the upstart Atlanta Braves and Philadelphia Phillies in a season marred by injuries and poor performances, especially by the bullpen. Things got so bad that the Nats flirted with trading superstar Bryce Harper in order to extract a bit of a return in his last year before hitting free agency, then basically wrote off the season in late August when they traded away a number of veterans, but not Harper. Still, in early September, GM Mike Rizzo confirmed that Martinez would return in 2019 in spite of the disappointing year. However, when the Nats started the season slowly again, on May 24th Rizzo had to give Martinez the proverbial vote of confidence, which often becomes the equally proverbial kiss of death, as rumors were swirling that Martinez was in a race with the New York Mets' Mickey Callaway to determine who would be the first major league manager to be fired that year. The Nats were 19-31 at the time, the fourth worst record in the majors. However, they managed to turn things completely around and were among the best teams in the league the rest of the way, finishing with 93 wins and claiming home field advantage in the Wild Card Game.