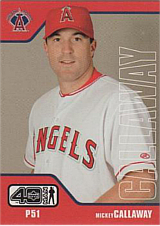 Mickey Callaway pitched parts of five seasons in MLB. A successful pitching coach with the Cleveland Indians, he later embarked on a wild ride as New York Mets manager.

Callaway spent all of 2000 with Durham, where he had a fine 11-6 record despite a 5.29 ERA and .313 opposing batting average. He led the club in victories by four. Mickey was better with the 2001 Bulls, going 11-7 with a 3.07 ERA (5th in the IL and walking only 24 in 129 innings. That earned him a return trip to Tampa Bay for two games. In the winter, Tampa Bay sent him to the Anaheim Angels for Wilmy Caceres. Mickey dazzled with the 2002 Salt Lake Stingers, posting a 9-2, 1.68 line, allowing a .228 average and walking 22 in 91 innings pitched. He had a late call-up to the 2002 Angels, going 2-1 with a 4.19 ERA as a solid starter down the stretch. Starting 2003 with the Angels (1-4, 6.81 in Anaheim), Mickey spent most of June and July back in Salt Lake City (1-0, 2.95). Anaheim let him go near the end of July and the Texas Rangers signed him just over a week later. He had a 2-0, 1.59 line in four starts with the Oklahoma RedHawks before finishing the year with the Rangers (0-3, 6.45). Callaway began the 2004 season with a scoreless inning of relief for Texas. He made a start on April 13 and allowed 7 hits, 4 walks and 6 runs in 1 1/3 innings before being yanked. He was diagnosed with an inflamed ulnar nerve and had surgery in May. In June, he began throwing again and was back in action in July, winning two rehab starts with the Frisco RoughRiders, allowing no runs, 3 hits, 4 walks and 9 strikeouts in 12 innings. Called back up to Texas, he had two more rocky outings (finishing the MLB season with a 0-1, 7.94 line) before going back on the DL, this time with a strained right forearm. His MLB career was over with a 4-11, 6.27 career record.

In 2008, Callaway served as the interim head coach at Texas A&M International University for one season. Following his Taiwan adventure, he was the pitching coach for the Lake County Captains in 2010 and the Kinston Indians in 2011. In 2012, he was named minor league pitching coordinator for the Cleveland Indians. In 2013, he was named the Indians' pitching coach. The team's pitching was very successful under his guidance, with Corey Kluber winning the 2014 American League Cy Young Award and the team making it to the postseason in both 2016, when they made it all the way to Game 7 of the World Series, and 2017.

On October 23, 2017, he was hired by the New York Mets to be their new manager, replacing Terry Collins. Callaway had a mediocre first season as manager of the Mets in 2018, as after a strong start, the Mets quickly fell in the standings and were never again in contention, finishing in 4th place, 8 games below .500. Many observers were expecting them to contend in 2019, but they got off to a slow start again, forcing upper management to give Callaway the dreaded "vote of confidence" in May. There was also a constant atmosphere akin to a soap opera around the team both years. His tenure was seen as shaky since he had been hired by Sandy Alderson, who had given way to Brodie Van Wagenen after the 2018 season, and the new GM had no vested interest in his being successful. On June 23rd, he was involved in an incident that received wide media coverage when he shouted at beat writer Tim Healey of Newsday to leave the clubhouse, using choice profanities, with pitcher Jason Vargas joining in the fray. The Mets were forced to apologize afterwards, and the incident did nothing to strengthen Callaway's position with the team. A couple of days following the end of the season, he was fired.

It did not take Mickey long to find a new job after being fired as, on October 26th, he was hired by the Los Angeles Angels and their new manager, Joe Maddon, to be the team's pitching coach in 2020. On February 1, 2021, however, The Athletic reported that Callaway had been accused of aggressive and indecent behavior, including sending inappropriate electronic messages, directed at five women employed in the sports media industry The allegations spanned five years during which he had been employed by three different teams. The Angels immediately promised to conduct a full investigation, but it was clear that if any of the allegations were verified, this was certain to terminate his employment, given the recent firing of Mets General Manager Jared Porter after similar incidents became public. It took less than 24 hours for the Angels to announce Callaway was being suspended pending the results of the investigation. On May 26th, Major League Baseball placed Callaway on the ineligible list for the remainder of 2021 and all of 2022, following the completion of the investigation, and the Angels immediately announced that they were cutting all employment ties with him. The Commissioner also made it clear that the Indians had not done enough to create an environment free of harassment in which people could feel free to report inappropriate behavior, and team owner Paul Dolan issued a statement to the effect that the team would work to remedy this.

In 2022, he started the season as manager of the Acereros de Monclova in the Mexican League but was fired a few weeks into the season.