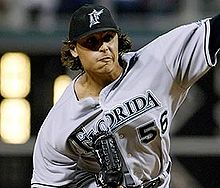 Jason Vargas was drafted by the Florida Marlins in the 2nd round of the 2004 amateur draft. He was signed by scout Robby Corsaro and made his pro debut that summer.

On December 19, 2012, Vargas was traded to the Los Angeles Angels of Anaheim for 1B Kendrys Morales. After a mediocre start to his 2013 season, he was voted the American League's Pitcher of the Month for May, when he went 5-0 with a 2.30 ERA and a shutout. However, he made only 24 starts, going 9-8, 4.02, losing time to a blood clot that required surgery. His ERA was 3.65 when he went on the disabled list on June 18th. He pitched well in 4 August starts after his return, but was only 1-3, 5.55 in September, leading to his disappointing final record. He became a free agent after the season and on November 21st signed a four-year deal with the Kansas City Royals for $32 million.

Vargas underwent Tommy John surgery in August 2015 after making only 9 starts that season. He thus missed the Royals' run to a World Series title. He had been a big part of the World Series team in 2014, though, when he went 11-10, 3.71 in 30 starts. He pitched 187 innings that season and started three times in the postseason, winning once, over the Baltimore Orioles in the ALCS, to finish with a 3.52 ERA in 15 1/3 innings. He started Game 4 of the World Series against the San Francisco Giants on October 25th but ended up with a no-decision after giving up 3 runs in 4 innings. In 2015, he was 5-2, 3.98 before needing the surgery.

Vargas returned to action on September 17, 2016 after missing over a year of action. He pitched three innings in a start against the Chicago White Sox in his return to the big leagues. He had no decisions in 3 starts, with a 2.25 ERA in 12 innings. He recorded his first win since 2015 on April 7, 2017 when he gave up one run in 6 innings in a start against the Houston Astros. In fact, he was one of the few bright lights for the Royals over the first six weeks of the season, when the team as a whole was struggling. On May 11th, he lowered his ERA to 1.01 in a 6-0 win over the Tampa Bay Rays. His seven scoreless innings that day made him the major league ERA leader while his record stood at 5-1. Things came crashing down in his next start on May 17th, however, as he gave up 5 earned runs to the New York Yankees in the 4th inning - as many as in his first seven starts combined! The 11-7 loss increased his ERA by a full run, to 2.03. While he was back on earth, he was still pitching well, as on June 2nd he tossed a 4-0 shutout against the Cleveland Indians to improve to 7-3 on the year. On June 18th, he became the first ten-game winner in the majors when he defeated the Angels, 7-3. He was named to his first All-Star team in recognition of his outstanding first half. He went 12-3, 2.62 during the first half, but just 6-8, 6.38 afterwards, to finish at 18-11, 4.16. He tied for the AL lead in wins (and easily set a personal best in the process) and his 134 strikeouts were the second-most of his career.

He became a free agent after the 2017 season, but it took him a while to find a team, as teams were hesitant to offer a huge contract given his age, recent history of injuries, and uneven results in the past season. On February 16, 2018, it was the Mets who decided to repatriate him (he had pitched for them very briefly in 2007), offering him a two-year deal worth $16 million. This was a bit of a surprise as, in theory, the Mets already had plenty of starting pitchers, although they had learned a bitter lesson the previous year when they had headed into spring training in a similar position only to see a rash of injuries lay waste to their plans and force them to dig deep into their organizational depths to find enough starting pitching to get through the season. He was on his way to making the team's starting rotation when on March 16th, he suffered a broken hamate bone in his non-throwing hand after being hit by a comebacker in a minor league game. He had to undergo surgery and the early prognosis was that he would miss six weeks of action. He was reactivated on April 22nd, just in time to take over for a struggling Matt Harvey in the Mets' starting rotation. He ended up making 20 starts for the Mets and going 7-9, 5.77. His generous contract meant he was back with the team in 2019 and he made the news not for his pitching but for his involvement in an altercation in the clubhouse with beat writer Tim Healey on June 23rd. He threatened to knock out the journalist after manager Mickey Callaway had started to berate him with profanities. He was issued a fine for his fine work, and a month later, on July 29th, he was sent to the Philadelphia Phillies when the Mets suddenly found themselves with a surplus of starting pitchers after unexpectedly acquiring Marcus Stroman in a trade with the Toronto Blue Jays. The return for Vargas, who was 6-5, 4.01 in 19 games at the time, was minimal: AA catcher Austin Bossart, who was batting .195 at the time.