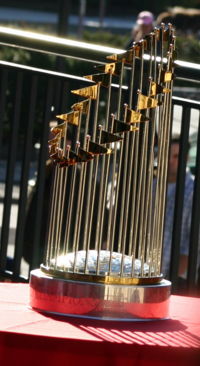 The World Series is currently a best-of-seven series between the champion of the American League and National League. The winning team is dubbed the World Champions, even though this is a misnomer given the number of other professional baseball leagues that exist in the world. The first modern World Series was a best-of-nine series played in 1903 between the Pittsburgh Pirates and the Boston Americans.

There had been other post-season series in the 19th Century, most notably the games played between the champions of the National League and those of the American Association, and the later Temple Cup series between the top two finishers in the National League that were played from 1894 to 1898, but these were more akin to exhibition games than to the hard-fought post-season games that have come to characterize the World Series.

World Series have been played every year since 1903, except for 1904, when the NL pennant winners, the New York Giants refused to play the champions of what they considered an up-start league, and in 1994 when the entire post-season was wiped out by a labor conflict. Since 1969, when the leagues were split into two divisions each, the two leagues' representatives in the World Series have been determined by another round of post-season games, the League Championship Series, pitting the winner of the Eastern Division against that of the Western Division in each league. In 1981, because of the strike that cut out a third of the season, a third round of play-offs was added between the winners of the first and second halves of the season (see 1981 Split Season Schedule for details), called the Division Series. The Division Series reappeared in 1995, with the re-organization of the two leagues into three divisions; the three division winners were joined by a Wild Card team, which was the second-place team from any of the divisions that has compiled the best record over the regular season. In 2012, a second wild card team was added in each league, with the two teams playing each other in a one-game showdown to determine which of the two will get a chance to play in the Division Series. As a result of these changes, modern World Series do not necessarily feature the teams with the best records in each league. In another relatively recent twist, home field advantage, which used to alternate between the two leagues, was awarded to the representative of the league which has prevailed in that season's All-Star Game from 2003 to 2016. Since 2017 it has been awarded to the team with the better regular season record.

The World Series were an immediate success, notwithstanding their boycott by the Giants in 1904, and within a few years were riveting the entire United States. With the development of other professional sports and the broadening of the entertainment industry, the World Series no longer have such a hold on American popular culture, but they remain the defining moment of the baseball season.

The World Series MVP Award was first given out in 1955.

The New York Yankees are the team which has won the most World Series titles with 27.