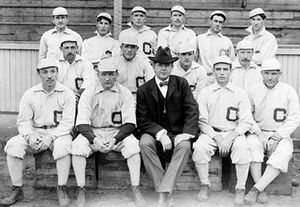 The Chicago White Sox were one of the original teams in the American League. Owned by Charles Comiskey, the Sox were one of the best teams in baseball for the first two decades of the 20th Century, reaching the World Series three times. In 1901, the first year of the AL, the Sox won the pennant under the leadership of manager and star pitcher Clark Griffith. The 1906 club earned the nickname the "Hitless Wonders" because the team's batting average was only .230. However, their pitching staff, led by Ed Walsh and Doc White was stellar, and the Sox went on to beat the crosstown rival Chicago Cubs in the World Series. 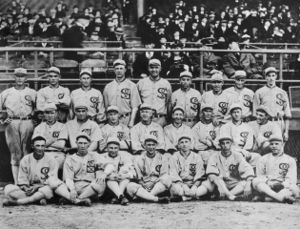 After struggling for several seasons, Comiskey acquired Eddie Collins, Happy Felsch, and legendary outfielder "Shoeless Joe" Jackson, and the team's fortunes improved. The Sox reached the World Series again in 1917 and 1919, defeating the New York Giants in the 1917 World Series but losing to the Cincinnati Reds in 1919. However, in 1920, it came out that eight Sox players intentionally threw the 1919 World Series to the Reds. Those eight players, including Jackson, were banned from baseball. This became known as the Black Sox Scandal, and for years afterwards, a dark cloud hung over the White Sox.

Through the 1940s, the White Sox struggled, never finishing higher than third, despite having great players including shortstop Luke Appling and pitcher Ted Lyons. In the 1950s, the team's fortunes began to improve. They finished in third place each year from 1952 to 1956 and finished in second in 1957 and 1958. In 1959, the Sox finally returned to the World Series after a 40 year absence. The "Go Go Sox", managed by Al Lopez, were led by the American League Most Valuable Player, second baseman Nellie Fox, and the Cy Young Award winner, pitcher Early Wynn. Despite winning the first game 11-0, they ended up losing the World Series 4 games to 2 to the Los Angeles Dodgers.

In the early 1960s, the Sox were consistently an above .500 team, but couldn't manage to reach the World Series again. Behind the strong pitching of Joel Horlen, Gary Peters, and Tommy John, the 1967 team appeared to be headed for the Series until losing both games of a doubleheader to the last place Kansas City Athletics in the final week of the season. They struggled the next few seasons, losing a team record 106 games in 1970, until they acquired Dick Allen from the Los Angeles Dodgers. Allen won the American League Most Valuable Player award in 1972, and the Sox challenged the Oakland Athletics for the American League West title that year, ultimately falling 5 1/2 games short. The team returned to mediocrity until 1977. That season, the Sox acquired sluggers Richie Zisk, Oscar Gamble, and Eric Soderholm. The "South Side Hit Men" hit 192 home runs as a team and finished in third place. However, following the season, the Sox lost Zisk and Gamble to free agency. July 12, 1979 was another dark day in White Sox history, when a "Disco Demolition Night" promotion between the games of a doubleheader against the Detroit Tigers got out of control. The Sox had to forfeit the second game.

In 1981 the White Sox were sold to a group led by Jerry Reinsdorf and Eddie Einhorn, and the fortunes of the club, led by manager Tony LaRussa, began to improve again. The Sox signed free agent catcher Carlton Fisk and acquired designated hitter Greg Luzinski from the Philadelphia Phillies. They also developed a young pitching staff, led by LaMarr Hoyt, Richard Dotson, and Britt Burns. In 1983, they added rookie outfielder Ron Kittle and went on to win their division by 20 games. They beat the Baltimore Orioles in the first game of the American League Championship Series but then lost the next two. In Game 4, Burns pitched 9 innings of shutout ball, before giving up a run to the Orioles in the 10th to lose the game and the series. Despite the addition of Hall of Fame pitcher Tom Seaver, they were unable to recapture the magic the following season. LaRussa was fired as manager in 1986, and the Sox struggled for the rest of the decade.

In 1990, the Sox surprisingly finished in second place, led by veteran Fisk and youngsters Frank Thomas, Robin Ventura, and Jack McDowell. In 1991, the Sox left Comiskey Park, their home for the previous 80 years, and moved into new Comiskey Park (now known as U.S. Cellular Field). In 1993, the Sox won the American League West but lost to the Toronto Blue Jays in the American League Championship Series. In 1994, the Sox appeared headed for the playoffs once again when the season was cut short by a player's strike. The team struggled the following year and fired manager Gene Lamont, and within the next few seasons, they had gotten rid of all their stars except Thomas.

In 1999, the Sox won only 75 games, their worst season in a decade. However, in 2000, the team improved by 20 wins. The White Sox made up for a lack of starting pitching with the bats of young sluggers Magglio Ordonez and Paul Konerko and the veteran Thomas. They won the American League Central but were swept in the American League Division Series by the Seattle Mariners. The next four seasons, the Sox were around .500 and finished second or third in their division. But in 2005, the White Sox, now managed by former player Ozzie Guillen, made a return to the playoffs, despite some stressful moments for Sox fans. On August 1st, the Sox held a 15-game lead over the second-place Cleveland Indians. By late September, the surging Indians had cut the lead to a game and a half before the Sox finally clinched the division on September 29th. Despite their late-season struggles, the Sox did finish the season with the best record in the American League and then swept the Boston Red Sox in the Division Series to advance to the ALCS for the first time in over a decade. In the ALCS, the Sox starting pitching was dominant. The Sox lost the first game to the Los Angeles Angels but came back to take the next four. Starters Mark Buehrle, Jon Garland, Freddy Garcia, and Jose Contreras pitched four consecutive complete games (a first in LCS play), and the Sox advanced to the World Series for the first time in 46 years. The Sox went on to sweep the Houston Astros to win the World Series for the first time in 88 years.

Not content to rest on their laurels, the Sox made several moves prior to the 2006 season, including trading for designated hitter Jim Thome and pitcher Javier Vazquez, and re-signing Konerko to a lucrative deal. Led by the bats of Thome, Konerko, Joe Crede, and Jermaine Dye, the team burst out of the gate and battled the Detroit Tigers for the AL Central lead through the All-Star Break. However, the Sox stuggled in later July and fell behind the Tigers, before eventually being passed by the Minnesota Twins in the wild card race. Unfortunately for Sox fans, the decline continued in 2007, as the team finished in fourth place with a 72-90 mark, their worst record since 1989. They did bounce back in 2008, when a revamped team led by Carlos Quentin and rookie Alexei Ramirez and featuring young pitchers such as Gavin Floyd and John Danks led the AL Central almost from start to finish, before falling into a tie with the Twins in the season's las days. The Sox won a one-game playoff 1-0, thanks to a Thome home run, to advance to the post-season, but fell in four games to the Tampa Bay Rays in the ALDS.

The White Sox are also frequently called the "ChiSox" or the "Pale Hose".