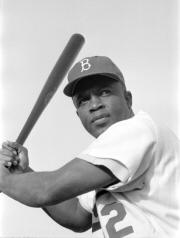 "He was a great competitor who could do it all. He was a great player, a manager's dream... If I had to go to war, I'd want him on my side." - Leo Durocher

Jackie Robinson was a Hall of Fame infielder famous for breaking baseball's color line and starting the reintegration of Organized Baseball. While he was not the first African American in the majors - 19th Century players Fleet and Welday Walker preceded him, and some claims have been made that Providence's Bill White was also African American - he led baseball into becoming the multiracial sport it is today.

When he was elected by baseball writers to Cooperstown it was in recognition of both his role as a pioneer and superb performance on the field in spite of his career having been held to a modest length by baseball's unwritten prohibition against Blacks.

Robinson was born in Georgia, but his mother moved the family to Pasadena, CA in 1920 after they were abandoned by his father. He attended Muir High School in Pasadena and played baseball, basketball and track. He then went to UCLA on an athletic scholarship. Robinson was a multi-sport star and the only person in the history of UCLA athletics to letter in four different sports. In addition to playing baseball, he was a leading running back in football, a top scorer in basketball, and an excellent sprinter and long-jumper. On the football team, Robinson was a teammate of Kenny Washington and Woody Strode, the two men who re-integrated the NFL in 1946. Washington played for the Los Angeles Angels in 1950 and his son Kenny Washington Jr. also played minor league ball in the Los Angeles Dodgers chain in 1964-1969. Robinson's older brother, Mack, finished second to Jesse Owens in the 200-meter race in the 1936 Olympics, and it's likely that Jackie would have been an Olympian except for the cancellation of the 1940 games. In 2017, a statue of Robinson in football gear was erected outside the Rose Bowl in Pasadena, CA, in memory of his record-breaking 104-yard kickoff return in the 1938 Rose Bowl Game. 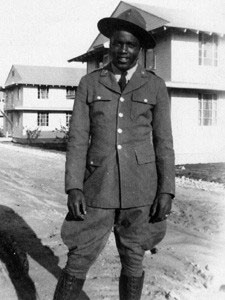 Robinson in the Army

After leaving UCLA a few credits short of graduation, Robinson joined the US Army to serve in the Second World War. After initially being rejected, he was able to force his way into Officer Candidate school and was commissioned as a Lieutenant. While training at Fort Hood, TX, Robinson refused to move to the back of a bus when a white woman demanded that he do so. Even though Army regulations specifically backed him, Robinson was court-martialed for insubordination. He was acquitted, but was still unfairly branded as a racial agitator. The Army found a pretext to give him an honorable discharge soon afterward.

Following his discharge, Robinson signed with the Negro League Kansas City Monarchs for the 1945 season. He was a successful shortstop for the Monarchs and was named to the East-West All-Star game. While playing for the Monarchs, he was scouted by Branch Rickey of the Brooklyn Dodgers, who intended to sign top African American players to break the color line. Rickey picked Robinson as the best candidate, and signed him to great publicity on October 23, 1945.

Rather than send Robinson straight to the majors, Rickey decided to have him spend one year in the minor leagues. Rickey's exact reasoning for doing so is unclear, but it was probably with the idea that Robinson could win support of his right to play in the majors by succeeding in the minors. If so, his hopes were dashed. While Robinson did his part, winning the 1946 International League MVP Award with an outstanding season for the Montreal Royals, the hoped-for support did not materialize. That said, Robinson was extremely popular in Montreal, embraced by fans and neighbors alike, and while the French-speaking city was atypical of North America, it gave Rickey hope that the same thing could happen in Brooklyn if the young man was also successful on the field. In 1960 he was elected to the International League Hall of Fame. He was also elected to the Canadian Baseball Hall of Fame in recognition of his ground-breaking year in Montreal; a statue of him was also erected on the site of Delorimier Downs, his old ballpark, then was later moved to a more prominent location, on the concourse outside Stade Olympique. A copy of that statue also exists at Jackie Robinson Stadium in Daytona Beach, FL, where he played his first spring training with the Dodgers' minor leaguers in 1946.

"Jackie Robinson was the greatest competitor I ever saw. He didn't win, he triumphed." - Ralph Branca

Rickey went ahead anyway, naming Robinson the Dodgers' starting first baseman for the 1947 season. In spring training, Dodgers' manager Leo Durocher squelched a threatened strike by several Dodgers' players who didn't want to play with an African American teammate, and Commissioner Happy Chandler did the same when other teams threatened to refuse to play the Dodgers. Unfortunately for him, Durocher, who immediately recognized Robinson's potential greatness and badly wanted him in his line-up, was suspended for socializing with gamblers just before the start of the season. Coach Clyde Sukeforth was thus interim manager on Opening day, and two days later was succeeded by Burt Shotton, a mild-mannered older man who did not have it in his temperament to fight on behalf of his players the way Durocher did. As a result, Robinson faced a lot of on-field taunting by opposing teams and fans. Despite the turmoil, Robinson proved himself, batting .297, leading the league with 29 stolen bases, and winning the newly created BBWAA Rookie of the Year Award. He also was was voted Rookie of the Year by The Sporting News, which had opposed integration. The BBWAA Award was officially named for Jackie Robinson in 1997. The date of his major league debut, April 15th is now celebrated annually throughout Major League Baseball. While Robinson was the first black player of the modern era, he was soon joined by a few other pioneers, such as Larry Doby, Willard Brown and Hank Thompson in the American League, and his own teammate, Dan Bankhead, the first African American pitcher, who made his debut in late August. The Dodgers won the pennant and reached the World Series that year, bowing to the New York Yankees in seven games. There was no going back to segregation after that.

With his place in baseball firmly established, Robinson went on to great success. He was moved to a more natural position, second base, in 1948. In 1949, he won the National League batting title and was named the NL MVP. Besides winning the batting title in 1949, he led the league in stolen bases (for the 2nd time) and runs produced - besides finishing in the top five in several other batting departments. Later in his career he was moved away from second base, dividing his time between third base and the outfield. The Dodgers attempted to trade Robinson to the New York Giants after the 1956 season, but Robinson refused to report to his new team and retired instead. In his 10 years with the Dodgers, they won the NL pennant six times and the World Series once, in 1955. 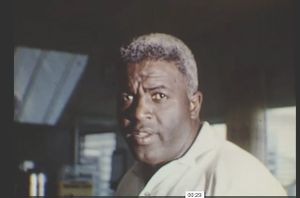 Color photo of Jackie from the 1960's taken in Florida

Following his playing career, Robinson served as Vice President of Chock Full O'Nuts, a coffee chain that made a point of hiring African Americans, and was on the board of directors of the National Association for the Advancement of Colored People (NAACP). He remained active in civil rights and politics until late in his life. He was elected to the Hall of Fame in 1962, alongside Bob Feller, in his first year of eligibility. He was the first African American enshrined in the Hall. He was also briefly a broadcaster for ABC on Game of the Week telecasts, making him the first African-American broadcaster of major league baseball games.

Following his death in 1972, his wife, Rachel Robinson, has continued to be a prominent activist on behalf of civil rights and has won numerous awards for continuing the work of her husband. She has been a regular participants at events organized around baseball to honor her late husband's memory. A 20 cent U.S. commemorative stamp was issued in Jackie's honor on the 10th anniversary of his death in 1982, and a second one in 1999. 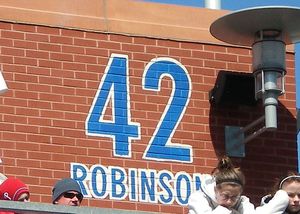 His number 42 has been retired across baseball in tribute to his career accomplishments. He was awarded the Congressional Gold Medal posthumously in 2003, only the second baseball player to receive the award. His life story has become much bigger than baseball; it is regularly taught to children as part of their school curriculum on civil rights, and he has been the subject of two major motion pictures: The Jackie Robinson Story (1950) in which Robinson played himself, and 42, released in 2013. Every April 15th, in memory of his debut, Major League Baseball celebrates Jackie Robinson Day.

On November 21, 2014, to mark the 75th anniversary of his enrollment at the university, UCLA announced it would retire the number 42 in his honor across all sports in which varsity teams compete and rename its athletic facilities the "Jackie Robinson Athletics and Recreation Complex." On April 27, 2017, ground was broken in Manhattan, NY towards the construction of the Jackie Robinson Museum, which will be dedicated to commemorating his athletic and social legacy and educate future generations about civil rights issues.

In 2019, Major League Baseball recognized the 100th anniversary of his birth during the entire season. It began with the centenary celebration of his birth on January 31st, continued with events during Black History Month (February), and throughout the year, many of them in support of the Jackie Robinson Foundation, and culminating in December with the opening of his museum in New York.

Robinson's skill set is not well understood. He was an excellent fielder at several positions, something that is not usually remembered. He was also frequently put by Dodger managers in the clean-up spot in the line-up, where he served as a "second lead-off man" - he had the power to drive in runs if there were players on base, but he could just as easily hit a single or earn a walk to start a rally. As one example, he batted clean-up behind Duke Snider in the fifth game of the 1952 World Series, getting four walks and a stolen base in a game that the Dodgers won in the 11th inning. He was a fiery player who wanted to be a winner, and he had good speed even though there was usually not much need to steal a base on a team with such good hitting.

There is really no player in baseball history that is a lot like Robinson, but one modern player - Bobby Abreu - is somewhat similar in terms of high average, decent power, good walks, speed, and fielding ability.

"Every time I look at my pocketbook, I see Jackie Robinson." - Willie Mays