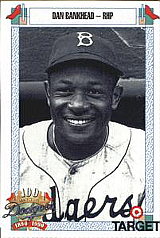 "Dan was a happy-go-lucky sort of guy. Wouldn't bother anyone. A great guy who loved baseball. Could run like a deer. Could he run! Oh, could that guy run! But he never did make it as a pitcher. What I remember most about him was how he used to stamp his foot down so hard, whoom, stamp the hell out of the rubber when he pitched. And I remember in his first at bat he hit a home run against Fritz Ostermueller of the Pittsburgh Pirates." - Al Gionfriddo, discussing Dan in Peter Golenbock's Bums: An Oral History of the Brooklyn Dodgers

The brother of Negro Leaguers Sammy Bankhead, Fred Bankhead, Garnett Bankhead and Joe Bankhead, Dan Bankhead was the first African-American pitcher in the majors. He crafted impressive winning percentages first in the Negro Leagues, then later in the affiliated minors and majors. His baseball career covered a 26-year period with a couple of breaks and saw him move gradually from pitching to the field.

Dan, primarily a fastball and screwball pitcher, was hyped as the next Satchel Paige early in his career, which started on an impressive note. After a 2-1 season for the Birmingham Black Barons in 1940, Dan went 6-1 in 1941 with a 0.96 RA. He led the Negro American League in RA by .71 over Lefty McKinnis and was third in wins behind Hilton Smith and Satch. In the 1941 East-West Game, the 21-year-old pitched two scoreless innings, allowing one hit and one walk for the West. He started 1942 3-0 to run his career record to 11-2 before his career was halted by World War II, serving in the US military from 1943 through 1945.

In 1946, Dan returned to the mound with the Memphis Red Sox. He went 7-3 with a 3.14 RA, third behind Paige and Gentry Jessup. He tied Jimmy Newberry and Jessup for second in wins (behind Connie Johnson) and his 42 strikeouts led the NAL. He was Memphis's highest-paid player at this point in time. In the first 1946 East-West Game, he started for the West but allowed two runs in 3 innings. He pitched three relief innings in the second 1946 East-West Game, allowing no runs and getting the win for the West. In the winter of 1946-1947, Bankhead struck out 179 in the Puerto Rican Winter League for Caguas and went 12-8. For Memphis in 1947, he went 4-4 but ranked fourth in RA (4.85) and led the NAL in strikeouts once more with 113. Starting for the West in the first East-West Game of 1947, Dan pitched three innings and allowed one run and one hit, again picking up the win. Overall, he was 23-9 in the Negro Leagues and 2-0 in East-West Games.

He joined the Brooklyn Dodgers in 1947 to become the first African-American pitcher in the major leagues. He was the roommate of Jackie Robinson, who had broken major league baseball's color line only five months earlier. Making his debut on August 26th, he homered in his first major league at-bat but allowed 8 runs and 23 baserunners in 10 innings over four games. Sent to the minors in 1948, Bankhead won 24 games. He went 20-6 with a 2.35 ERA and a no-hitter for the Nashua Dodgers, leading the New England League in wins and finishing second in ERA. He was also 4-0 with a 3.60 ERA for the St. Paul Saints. In 1949, Bankhead went 20-6 with a 3.76 ERA for the Montreal Royals. He was second in the International League in wins, two behind Al Widmar, and led in starts (34) and strikeouts (176). He also hit .323/~.353/.449 and took turns in the outfield, at first base and as a pinch-hitter. His 170 walks led the IL, though. In the 1949-1950 Puerto Rican League, Bankhead struck out 131 for Caguas. He blanked the defending champion Almendares Blues in the first game of the 1950 Caribbean Series, outdueling Connie Marrero 1-0. Bankhead led the Series with 16 strikeouts in 16 innings, but lost his other two decisions.

Bankhead's overall record, discounting All-Star competition, postseason play and winter ball, was 113-54. He died of cancer one day prior to his 56th birthday in Houston.