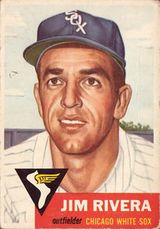 "When I came up, guys like "Jungle" Jim Rivera took the time to help me. He wasn’t afraid of losing his job. That's the way we were and it showed in those big, tough games." - Jim Landis

Jungle Jim Rivera was one of the most popular Chicago White Sox players, at a time when the White Sox were consistently good but usually unable to catch the New York Yankees. He played almost his entire major league career with the White Sox, except for parts of his first and last seasons. A quick and aggressive flychaser, he began his career as a center fielder, but played most of his games in right field. As one of the "Go Go Sox" speedsters, he led the American League in stolen bases in 1955, and finished second six times. He also led the league in triples in 1953. He appeared in the 1959 World Series, the culmination of a decade of good White Sox teams.

Rivera's early life was extraordinarily rough and, as a result, he was 29 when he first broke in to the big leagues. Born in Spanish Harlem as one of eleven children, Rivera was sent to an orphanage when his mother died as Jim reached school age. At 16, Jim left the orphanage to live in New York City with his father. Before joining the army for World War II, Jim worked odd jobs, boxed as an amateur and played semi-pro ball. While in the army, Rivera was charged with the rape and assault following a dance on base in Louisiana. After the victim, a daughter of an officer, was examined, the charge was changed to attempted rape. Rivera was convicted and sentenced to life.

Rivera was paroled five years later, in 1949. The Atlanta Crackers had scouted him in prison and signed him immediately. Rivera was sent to the Gainesville G-Men of the Class D Florida State League and then the Pensacola Fliers of the Class B Southeastern League. Both teams won pennants.

Rivera won the 1951 Pacific Coast League MVP and batting championship while winning his third straight pennant with the Seattle Rainiers, managed by Rogers Hornsby. Hornsby had seen Rivera playing for the Caguas Criollos while managing in the Puerto Rico Winter Baseball League and brought Rivera to Seattle that spring. When Hornsby then made his managerial big league comeback in 1952 with the St. Louis Browns, he took Jim Rivera with him again.

He played in the 1954 Caribbean Series, and was the best hitter with a .450 average.

Rivera returned to the Rainiers as a player after his big league career ended and then went on to manage the Jalisco Charros in the Mexican League in the 1960s. He was a player-coach for the Indianapolis Indians for part of 1962.

He has been inducted into the Chicagoland Sports Hall of Fame.