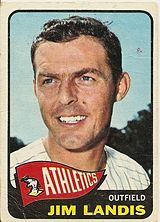 Eighteen-year-old Jim Landis was signed by the Chicago White Sox before the 1952 season. The outfielder was assigned to the Wisconsin Rapids White Sox of the Wisconsin State League and hit .274 in 92 games his first year out. 1953 saw Landis with the Colorado Springs Sky Sox in the class A Western League where he hit .313 with 14 home runs in 128 games. Landis spent the next two years (1954-1955) in the United States military.

The now 22-year-old arrived back for the 1956 season and played for both the Colorado Springs club again (13 games) and spent the biggest part of the season with the Memphis Chickasaws of the Southern Association (92 games). He hit for a combined .282 average with 6 homers. 1957 was his last year ever in the minor leagues, splitting another season, playing 37 games with the Indianapolis Indians of the American Association, hitting .246 and suiting up with the major league Chicago White Sox for the remainder of the year, appearing in 96 games and carrying a .212 average.

One of the greatest defensive outfielders in big league history, Jim was a fixture in center field for the White Sox from 1957 to 1964, The five-time Gold Glove winner was an integral part of Chicago's 1959 American League pennant-winning team, hitting .272 with 20 stolen bases for the "Go-Go White Sox". He then hit .292 (7-24) in the World Series including 3-for-4 in the 11-0 victory over the Los Angeles Dodgers in the opening game. In Game 3 Landis made a great catch on a fly ball by Jim Gilliam. In Game 5, he got a key hit that moved Nellie Fox to third base, where he scored on a ground out to give the Sox a 1-0 win over Sandy Koufax and take the Series back to Chicago. Unfortunately for Landis and the White Sox the Dodgers won Game 6, taking the series, 4 games to 2.

Landis had his best year at the plate in 1961 when he hit .283 with 22 homers and 85 RBIs, all career highs. On January 20, 1965 the White Sox traded Jim to the Kansas City Athletics and after one so-so season, the Athletics traded him to the Cleveland Indians in 1966, where he hit .222 in 85 games as a back-up. 1967 was Jim's last year in pro baseball; Cleveland traded him to the Houston Astros, who passed him on to the Detroit Tigers. They in turn released him and he signed as a free agent with the Boston Red Sox and on August 27th. The ball game was over when the Red Sox gave him his unconditional release.

Landis, whose .989 fielding percentage ranked second all-time to Jimmy Piersall when he retired, closed out his eleven-year major league run with a .247 batting average and 93 home runs. Jim's four seasons in the minors produced a .288 batting average with 27 homers. After his 15 active years in baseball (1952-1967) Landis returned to Roseville, California, where he was the owner of a company that designs and produces sign ad posters for use by businesses in promoting safety and protection from industrial accidents. Jim Landis has a son, Craig Landis, who is a player agent with clients including Paul Konerko.